“THESE PEOPLE COULD CARE LESS”

(Sep. 17, 2016) — Since early May, The Post & Email has reported on a myriad of problems at the Trousdale Turner Correctional Center (TTCC) in Hartsville, TN stemming from severe short-staffing and what appears to be lackadaisical and ineffectual management.

TTCC is owned and operated by Corrections Corporation of America (CCA), the largest domestically-based private prison company in the country. While CCA has not been willing to comment to The Post & Email about conditions at the prison, we have received dozens of letters from inmates and conducted at least a dozen interviews with relatives who have visited the prison on scheduled visitation days.

Many relatives have stated that although they had believed that their loved one’s situation at his previous TDOC-run prison was dire, they would welcome his return to the same prison if it would mean escaping the conditions at TTCC.

On Thursday, The New York Times announced the closing of a privately-run Mississippi youth prison, Walnut Grove, which was said to have meted out “barbaric” treatment of prisoners and to have been run by gangs from within.  In 2015, U.S. District Court Judge Carlton W. Reeves extended federal oversight of the prison resulting from what he had found to be constitutional violations against prisoners.

In 2012, the U.S. Department of Justice issued a report to Mississippi Gov. Phil Bryant outlining what it found to be “staff sexual misconduct,” the use of “excessive force,” and a “deliberate indifference to gang affiliations within the ranks of correctional staff.”

In June, the closing of the Walnut Grove was announced by the Mississippi Department of Correction (MDOC) as resulting from “a tighter than expected budget and a falling prison population in the state.”

On August 18, the Justice Department announced that it would not be renewing its contracts with private prison operators going forward.

Despite a number of complaints from prisoners claiming constitutional and civil-rights violations on many of Tennessee’s prisons, the Justice Department does not appear to have launched an investigation.

Numerous TTCC inmates have similarly reported that gang members are in fact operating the Hartsville facility in addition to terrorizing, beating and stealing from other inmates and attacking correction officers.  An article published by Nashville’s WSMV last year revealed a report from a prison cadet instructor that individuals with gang affiliations were knowingly placed in the program, a claim which the TDOC’s spokeswoman, Neysa Taylor, said was “inaccurate.”

The instructor acting as a whistle blower said that her “chain of command” told her to “stand down.”

While the arrival of new inmates at TTCC was halted temporarily resulting from a deficiency report issued in mid-March by TDOC official Tony Howerton, it appears to have resumed in late July, if not before.  The relative of an inmate who arrived at that time along with others related her story to The Post & Email last weekend, including that her loved one receives his medication for a serious chronic condition only sporadically, sometimes going several days without it.

In a letter received on Friday from an inmate well-known to this publication, problems denied as “inaccurate” by Taylor are said to be ongoing and specifically include guards leaving their posts without cause; a continued lack of employment for inmates who had held jobs at their previous respective facilities; another recent lockdown beginning on August 29 in an almost-continuous cycle; violence resulting in inmate deaths; written grievances ignored by staff; and the failure to dispense physician-prescribed medications, some of which could be life-saving.

“Now they are given X Number of money each month to provide us our medication. And the way they do us shutting the med line down before everyone can get their meds saves them money. See they have been giving the money already then they dont give us our meds,” [sic] he wrote.

Reiterating the inaccessibility of the law library during lockdown times, the inmate wrote, “What is bad these people could care less.” 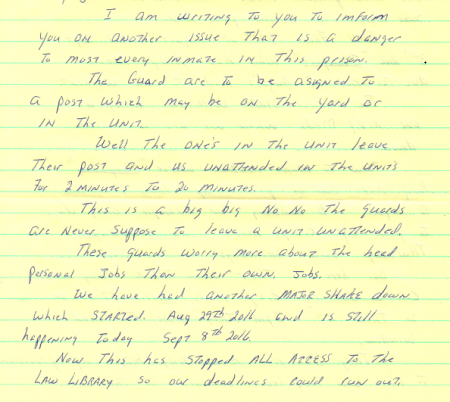 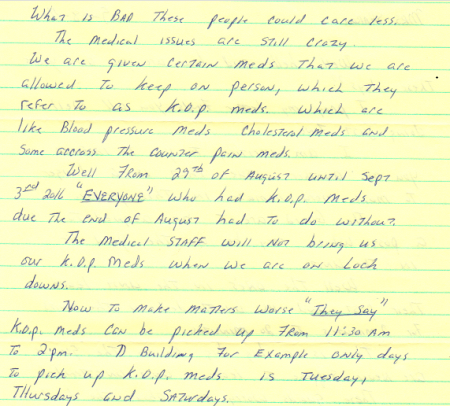 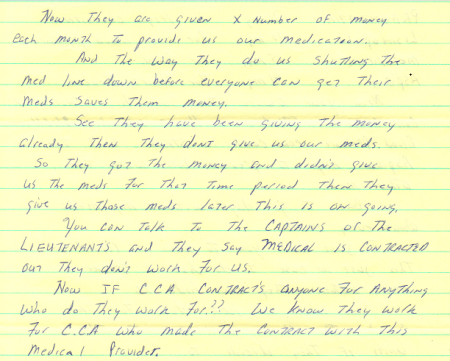 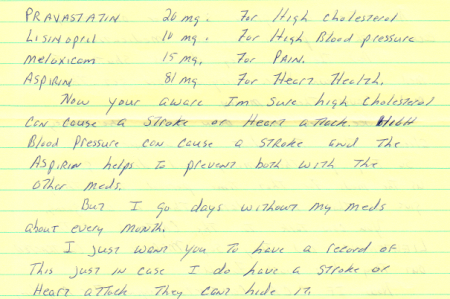 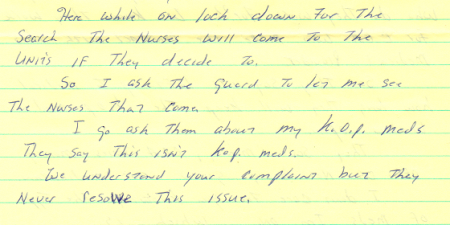