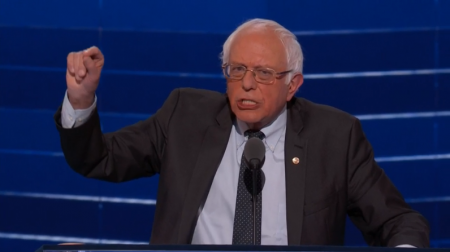 (Jul. 25, 2016) — After Bernie Sanders took the stage at the DNC on Monday night shortly before 11:00 p.m., he thanked all of his supporters and “delegates” for their work in the primaries, then said, “I look forward to your votes during the roll call vote tomorrow night.”

He then said that his campaign and supporters “have begun a political revolution to transform America, and that revolution, our revolution, continues.”

Barack Obama’s slogan in 2008 had been that he would “fundamentally transform the United States of America.”

Sanders said that the middle class has been declining for 40 years and that the standard of living for young people will go down if “wealth inequality” continues.

“We need leadership which brings our people together…” he said at 11:05 p.m. to the chants of “Bernie! Bernie!” by the crowd.  He punctuated his statement with, “Hillary Clinton must become the next president of the United States.”

People in attendance held up both “Bernie” and “I’m with Her” signs.

Sanders referenced the “struggle” of “workers,” terms which are often used by Communist or Socialist Parties.  He decried Republican presidential nominee Donald Trump’s opposition to raising the minimum wage by congressional statute.

Sanders opined that the 2009 U.S. Supreme Court decision of “Citizens United” is “one of the worst” opinions the high court has issued.

He said that the “rights” of immigrants, LGBT people, and working people must be protected.  “This election is about the thousands of young people I have met all over this country…who left college deeply in debt and tragically, the many others who cannot afford to go to college,” he said.  He spoke of “revolutionizing higher education in America” to establish “tuition-free” college for those whose family incomes are less than $125,000/year.

Sanders believes that “climate change” is a pressing problem as well and said that Clinton wishes to “transform our energy system.”

Sanders said that Donald Trump’s desire to abolish Obamacare is a mistake.

Sanders to Delegates: “I Look Forward to Your Votes During the Roll Call Vote Tomorrow Night” added on Monday, July 25, 2016