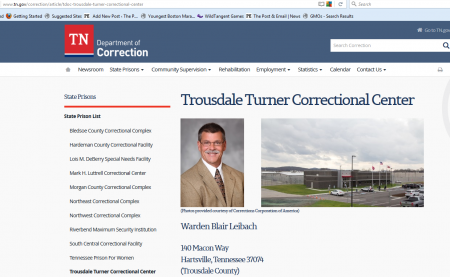 (Jul. 23, 2016) — On Friday, The Post & Email received a number of letters from inmates at the Trousdale Turner Correctional Center (TTCC), about which we have reported extensively since early May.

TTCC is located in Trousdale County, TN, and was considered an “economic development opportunity” when first contemplated in 2013 by the county mayor and then-Tennessee Department of Correction (TDOC) Commissioner Derrick Schofield.

The prison opened in January of this year but stopped taking new inmates in May after problems were reported, including by Tennessee mainstream media.

For nearly three months, The Post & Email has been informed by inmates and their relatives that severe understaffing has caused inmates to be in a state of “lockdown” for 23 hours each day.  Although designated a medium-security facility, a significant number of minimum-security prisoners have been relocated to TTCC, particularly in the month of April.

Other reports say that the food is substandard and routinely served cold after standing out for hours, and that few, if any, employment opportunities exist for inmates accustomed to working in their previous respective facilities.

A lack of protective custody for inmates perceiving danger to themselves has been reported as well as deaths of prisoners resulting from an alleged dearth of medical care.  Several inmates have reported that grievances are not addressed, with one relative reporting that an inmate witnessed completed inmate grievance forms being destroyed.

In mid-March, TDOC official Tony Howerton noted in a report that the privately-run facility was conducting inaccurate head-counting and that excessive use of force was exercised against an inmate who appeared to be compliant in a video-recording of the incident.

Reports from inmates and relatives include that gang members, or those who are “affiliated,” perform the nightly lockdown process while threatening and stealing from other inmates at will.  Because of staffing issues, including employees who have already left TTCC, a private company, G4S, has supplied personnel to act as correction officers for at least the last month but likely longer.

One of the letters received on Friday stated that “As you already know there’s alot of gang memers here + they’re in every unit.  Some units are worse than others, but in most units the gang members ‘run things’  There’s alot of robbing, stealing, + extorsion that goes on here + it happens to the unaffiliated guys in here.  There’s min. security guys that are getting beat up + robbed by gang members for their TVs, radios, shoes, commissary, or whatever else these guys can take from them + there’s nothing the unaffiliated guy can do about it because they come in on him 4 or 5 deep + sometimes they have knives + sometimes they don’t.  Either way it goes the guy is going to lose his stuff.”

Many inmates’ relatives have told The Post & Email that although the prisons where their loved ones were currently housed were dangerous, in comparison, they were much safer than TTCC.  Some relatives are grateful that their loved one has been relocated elsewhere.

Corrections Corporation of America (CCA), which owns and operates the prison, has declined to speak with The Post & Email or respond to emails for comment, while the warden’s office referred us to CCA.

The Post & Email is aware that CCA often reads articles it has published about the conditions at TTCC, which is one of four CCA-operated prisons in Tennessee.  Despite a state law permitting only one privately-run prison in Tennessee, on May 26 The Tennessean explained:

CCA has a five-year, $276 million contract to operate the facility. Although state law essentially allows for only one private prison, the department is using Trousdale County as something of a pass-through: Trousdale pays the money to CCA after receiving the money from the state.

On July 1, The Post & Email reported that, according to one inmate, TTCC conditions had improved “slightly.”

In addition to the aforementioned problems, inmates at the facility have repeatedly stated that use of the law library is very limited. In a second letter received on Friday, an inmate wrote that his time is often reduced to 15 minutes.  “We receive a pass to the library for an example for 9 AM to 9:30 AM well we cant leave the pod-unit until 9 AM,” he wrote.  “Now by the time we get into the library to work it’s 9:15 AM.  If you dont have proof of a legal deadline your ask to leave at 930 AM.” [sic] 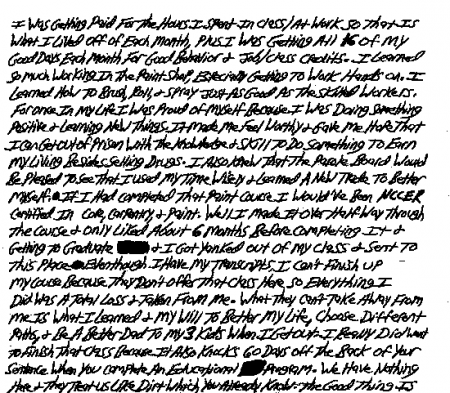 The first page of a second letter received on Friday appears below.