HAD PREVIOUSLY SAID HE WOULD LIKELY ATTEND 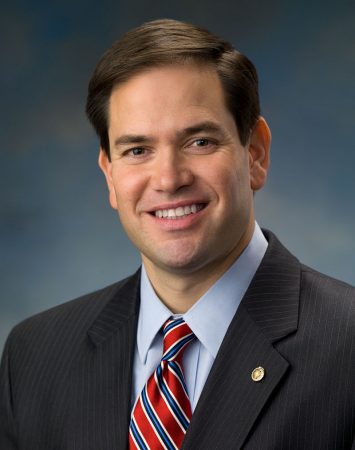 (Jul. 20, 2016) — On Wednesday’s “Outnumbered” show on the Fox News Channel, contributor Meghan McCain stated that rather than speaking in person at the Republican National Convention (RNC), Florida Sen. Marco Rubio, once an opponent of Republican presidential nominee Donald Trump, will be “phoning in a video.”

The discussion centered on Rubio and Sen. Ted Cruz, both of whom were considered formidable candidates early in the primaries which began on February 1 in Iowa.

When the list of speakers was published by USA Today on July 14, Rubio did not appear among them.

On May 26, however, Politico reported of Rubio, “In an excerpt of an interview published Thursday with CNN’s Jake Tapper, the Florida senator said he will attend the Republican National Convention in Cleveland in July and is willing to have a speaking role and expects his delegates to be released.”  Rubio was then quoted as having said, “Yeah, my sense is I’m gonna go to the convention. And I don’t know if I’ll have a role in the convention, but I have a lot of people going there that are supporters.”

After suspending his presidential campaign in March, Rubio said he did not plan to seek re-election to the U.S. Senate but later changed his mind before the filing deadline arrived.

On July 18, Coed News reported that Rubio would be “appearing” by video, with which McCain’s comment agreed.

Cruz is listed as a live speaker, and speculation as to whether or not he will embrace Trump as the party’s official nominee has abounded.  During the primaries, Trump had referred to Cruz as “Lyin’ Ted” and questioned his eligibility given Cruz’s birth in Canada and the “natural born Citizen” requirement in Article II, Section 1, clause 5 of the Constitution.

Cruz has not released any documentation to show that he was registered as a U.S. citizen at birth or later while claiming to be a “natural born Citizen” based solely on his mother’s alleged U.S. citizenship at the time of his birth in Calgary, Alberta in December 1970.

Eleanor Darragh Wilson Cruz was born a U.S. citizen in Delaware, but as The Post & Email exclusively reported, a highly reliable source reported just after Cruz suspended his campaign on May 3 that his mother, at some point, became a Canadian citizen, as did Cruz’s father, Rafael Bienvenido Cruz.

With a Cuban-father citizen and hypothetically a Canadian-citizen mother, Cruz could not conceivably be considered eligible for the U.S. presidency.  He appears to be considering a future presidential run.

The “Outnumbered” website continues to feature a photo of Andrea Tantaros, who has not appeared on the show since late May.

Reports: Marco Rubio to Give Video Address Only at the RNC on Wednesday Evening added on Wednesday, July 20, 2016

2 Responses to "Reports: Marco Rubio to Give Video Address Only at the RNC on Wednesday Evening"