SINCE WHEN DOES THE PRESIDENT INVOLVE HIM/HERSELF IN MORTGAGES? 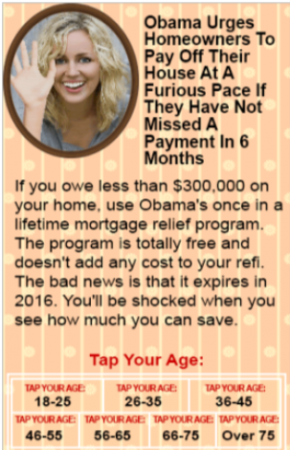 If Soetoro-Obama has his filthy fingers in anything “Washington,” you can bet it is a “scam” or a deal set up by the Mafiosi bureaucrats in the Congress. This appears to be “community organizing” on a grand scale. There must be several ladles of “gravy” for every member of the 114th Congress.

Is this program the result of some legislation which bypassed the scrutiny of We the People because of the lack of “transparency” Soetoro-Obama insists be a hallmark of HIS administration? I find it absolutely ludicrous that any red-blooded American Patriot serving in the Congress hasn’t the courage or the intelligence to initiate the process of impeachment. A majority of the House must surely be capable of ordering “The Mouth” to direct the Judiciary Committee to prepare Articles of Impeachment. The so-called leadership of the Majority is either in collusion with Soetoro-Obama or is concerned that if they fail to go along and get along, their scam will come to an abrupt end.

Soetoro-Obama is a certifiably anti-American, Anti-Christian sociopath. He has committed, at the very least, two separate acts of Treason, (documented in press and TV news media) and in one instance in collusion with the entire Democratic membership of the Senate and 23 Republican Senators. Further, at a bare minimum, he has committed five distinct acts of Accessory to Murder (Brian Terry, Chris Stevens, Sean Smith, Glenn Doherty and Tyrone Woods), multiple acts of felony perjury, use of false identity, multiple violations of Article II, Section 1, Clause 8. Additionally, this fraud has fostered and encouraged the murders of untold thousands of live-birth infants and has permitted desecration of their murdered corpses in the name of “science” via that agency facetiously known as “Planned Parenthood.” Murder, Inc. is a more apt nomenclature.

Therefore, I, Dr. Thomas E. Davis, residing at 326 F Nantucket Lane, Monroe Twp, NJ, 08831; DEMAND; I repeat, DEMAND the agency or agencies of the so-called but disreputable, dysfunctional government of the United States of America take immediate steps to remove from office the false, arrogant, narcissistic, despotic, characterless imposter known as Barack Hussein Obama who has for almost eight years been illegally effecting such damage as he is able upon this most charitable of nations which has generously given him refuge. In return we have received derision, veiled threats, incompetence, illegal introduction of terrorists and chaos.

There are only a few individuals in Washington, D.C. in whom I can place my full trust. Two are in just the right position to “depose” and then politically “dispose” of Barry Soetoro-Obama. In cooperation, the Chairman of the Joint Chiefs of Staff, General Joseph F. Dunford, Jr., and the Director of the Federal Bureau of Investigation, James B. Comey, possess all the tools and the knowledge and intelligence to use them.

General Dunford has the authority/discretion to declare martial law and place trustworthy individuals into necessary leadership positions for the six months it will take for the 2016 presidential election to run its course. Director Comey would make a most competent caretaker Chief Executive until the People have spoken and a legally-elected president is inaugurated as well as a fresh and likely more competent 115th Congress is sworn in. The reins of government could then be handed back over to control of the people, chastened, wiser and more involved in the business of running a civilized Federalist Democratic Republic.

The 45th president, all the wiser, having endured eight years of near disaster, is certain to entertain suggestions from the people to make small, precise and intelligent changes to our Supreme Document of Governance that will effect a change to reverse the disastrous warping of the past two centuries. As a beginning, I would suggest the first two changes that need to be made”

* Eliminate and forbid the creation of all the self-serving political parties.

* Repeal the Seventeenth Amendment thus returning some balance of power to the states, returning the nation to a Federal Republic as was the founders’ intent.

One Response to "More Garbage from Soetoro-Obama"