FOLLOWING THE “RULES” OR FOLLOWING “ORDERS” 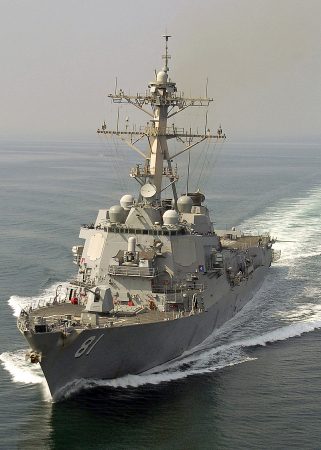 Curtain rises to the music of the theme “Victory at Sea” by Richard Rodgers. The stage is set as a Navy supply shed with a couple of lifeboats on jacks in various stages of disrepair. There’s a road sign on stage right, front, with a white arrow pointing right with “New York City, 6,614 miles” and one beneath it pointed left with “Hawaii, 8,720 miles.” It’s dusk and the six Navy enlisted are dressed in dungarees and the one officer in khakis. The men are going this way and that; a couple of them are at a card table, stage left, covering their faces and backs of hands with grease paint.

Officer: Center stage, rear. “Gather ’round and listen up. The skinny is, as I can see you know by now, that we’re going to have a visit from people who have some sort of problem with us desecrating their sacred land. At least that’s my take on it, being 9-11 and all.

“So this is what I want us to do: let’s say we turn the tables on them. Let’s say we just pretend we’re as stupid as our Commander-in-Chief and just loll around in La-La-Land waiting for the proverbial to hit-the-fan.

“I want some sort decoys set up, maybe dummies roasting marshmallows and hot dogs. Half of you will be on the roofs across the street and the other half in the various abandoned buildings that surround the compound, okay?

“I’ll start the fireworks off by sending up a flare and then just mow everything that moves, and even after it stops moving: double-tap. Got it?

“In the boxes in front of me are weapons that our forces collected in Afghanistan; mortars and AK’s, which we’ll leave behind. Wear the gloves but don’t discard them. I’ll collect them in the lifeboat as we leave.

“Afterwards we’ll very quickly, I repeat, very quickly regroup in the lifeboat tied up at the dock and then silently and quietly drift away. Any questions?

Curtain lowers. End of ACT I.

Curtain rises with the song “Anchors Aweigh.”  The stage is set with a cut-away of a lifeboat, facing stage left. A couple of the men are bloodied; one is lying on the bottom of the lifeboat with an intravenous tube running to his arm. The men are in high spirits with laughter and backslapping all around.

Officer: “Chief, start the engine and keep it at idle; steer North along the docks; keep as much between us and the road, got it?”

Chief: “Aye, sir, all ahead dead slow; due North. That was some surprise; like shooting ducks in a barrel. They didn’t stand a chance.”

Officer: “Right. They wanted to do the same to us, just like in Benghazi. I’d say it was a setup by the ‘powers-that-be.”

Chief: “What are you going to tell the ‘powers-that-be,’ sir?”

Officer: “To the ones I trust I’ll tell the truth: that we were, for once, proactive rather than waiting around for incoming; to the Pentagon politically-correct idiots I’ll just say things were looking hot and we left Dodge. Who’s that in the bilge?”

Chief: “Henderson, sir. Slipped and smashed his knee jumping into the launch; Peters ran into a bollard. Other than that, everyone’s fine. Eh, sir, who are these ‘powers-that-be?’”

Officer: “It’s the ‘secret government’; it’s the people who use the poor to gain their own ends.”

Chief: “Could you say that again, but this time in plain English, sir?”

Officer: “Oh, sorry. When I said ‘poor’ I didn’t mean money-wise, I meant soul-wise. It’s the ‘shadow government’ that’s been calling the shots.

“Listen: the Federal Reserve Bank isn’t doing us any favors, which is why they’ve been fighting off every attempt at being audited since they took over our monetary system. They use people; they out-and-out buy them off, is what they do.

“And then there’s the courts: those judges, now, they all took the oath to uphold the Constitution, yet they’ve all turned their backs on us, is yet another example. Remember when the courts passed the verdict on those citizens, citizens just like us, that they didn’t have ‘any standing’ to know whether their president was Constitutionally qualified to hold the office or not?

“Whistle-blowers sent to prison, just as LTC Terry Lakin was, and others. The IRS, EPA, the Bureau of Land Management, and others, are doing the bidding of the ‘powers-that-be,’ people who cling to their flimsy excuse to lord over others by depriving us, their fellow citizens, of our Constitutional rights. Been to an airport lately? 4th Amendment abuse. And they’re trying to do the same with our 2nd Amendment.

“Anyway, that’s my take on it. But understand this: I’m not alone. People for Hillary and Sanders are being used by the very people who want to keep them on the plantation; welfare and Food Stamps; living off the government and therefore controlled by the government.

“RINOS; so-called Republicans such as Paul Ryan; the ‘Anyone-but-Trump’ are of the same brand as those who cast their ballot for the status quo.

“And I’ve heard politicians actually say, right on television, that they’ll ‘sit this one out,’ not realizing that they’re proclaiming their ignorance by not casting a ballot and that they really are for whoever wins.

“Okay, listen up. If we had just stayed put and followed death-defying Rules of Engagement, we’d all been killed by now.

“So this is what we did. About 20:30 we got wind of a possible attack and, because we didn’t have diddlysquat to defend ourselves with, we just left. That’s our story. Let’s try and keep on the same page. That’s an order.”

Curtain lowers to the sound of the Beach Boys’ “Sail on, Sailor.”