“THE MOST TRANSPARENT ADMINISTRATION IN HISTORY” 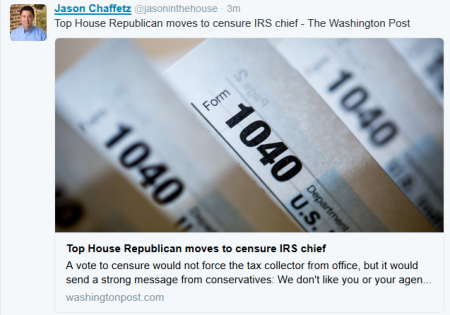 (May 18, 2016) — On Wednesday evening, House Oversight and Government Reform Committee Chairman Jason Chaffetz tweeted a link to an article in The Washington Post reporting that he has introduced a censure measure against IRS Commissioner John Koskinen which could lead to his impeachment, removal from office, and loss of federal pension.

The censure comes in the form of a resolution which will presumably receive a vote from the full House prior to the end of its session on May 26 leading into the Memorial Day holiday weekend.

While the topic of impeachment was not raised, Arizona Rep. Paul Gosar contended that Meiburg is serving in his position in violation of federal law.

According to The Wall Street Journal, Chaffetz has also introduced an impeachment resolution which will be deliberated on May 24 by the House Judiciary Committee.

The House of Representatives has not voted on Articles of Impeachment finalized in July 2014 by the North American Law Center (NALC) and submitted to the Judiciary Committee by a number of different parties naming Barack Hussein Obama in the commission of high crimes and misdemeanors including, but not limited to, “criminal identity fraud” and aiding and abetting enemies of the United States.

On August 1, 2013, Koskinen was nominated by Obama to head the agency following the departure of Stephen Miller in the wake of revelations that then-IRS Director of Exempt Organizations Lois Lerner and some of her staffers had targeted “conservative” and religious groups for unusual scrutiny following their application for tax-exempt status over the previous 2-3 years.

The revelations became commonly known as the “IRS scandal.”

Lerner, who promptly retired and now draws a six-figure retirement pension, said that her hard drive had crashed and that emails sought by House investigators over the matter were irretrievable, which was contradicted by the findings of the agency’s Inspector General.

Not long after his Senate confirmation, Koskinen was accused by House Republicans of “providing false testimony to Congress and presiding over the destruction of important emails.”

Last July, Chaffetz asked Obama in a 30-page missive “to remove Mr. Koskinen from office” for ignoring a subpoena and allegedly failing to preserve records germane to the committee’s investigation of the “targeting.”

On October 27, 2015, Chaffetz introduced an impeachment resolution of Koskinen for having “misled the public” and for failing to preserve documents.  It is unclear if today’s resolution and that of last October are identical.  The Washington Post reports that the Articles of Impeachment calling for Koskinen’s ouster are the same as those introduced last fall.

Some House Democrats have opined that Republicans’ desire to see Koskinen impeached and removed from office serve only as “political witch hunts.”

It has been theorized, but not confirmed, to The Post & Email that the impeachment of Koskinen could lead to similar action against other executive-branch office-holders, up to and including Obama.

Both while campaigning in 2007 and just after taking office on January 20, 2009, Obama promised “the most transparent administration in history,” a feat he claimed to have accomplished more than three years ago, after the IRS scandal became public.

Other scandals occurring on Obama’s watch include the US Department of Justice’s seizure of approximately 100 journalists’ telephone records without a warrant; the reported targeting of veterans and Second-Amendment rights advocates as “potential domestic terrorists;” the White House review of Freedom of Information Act (FOIA) requests deemed to involve “White House equities; the “Fast & Furious” gunrunning operation which knowingly transferred approximately 2000 weapons to Mexican drug lords and killed at least one US Border Patrol agent, Brian Terry; and continuing revelations that White House advisors with considerable clout manufactured narratives for sycophantic media outlets to disseminate unquestionably.

Another scandal purposely kept out of the media involves the forgery of Obama’s long-form birth certificate, posted on the White House website on April 27, 2011, as well as his Selective Service registration form disseminated to members of the public having requested it through FOIA.

Will Censure Lead to Impeachment? added on Wednesday, May 18, 2016