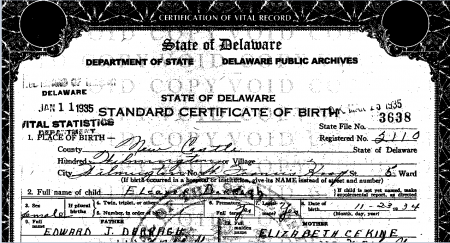 Cruz declared himself a candidate for President of the United States on March 23, 2015. He has been challenged by fellow presidential candidate Donald Trump as possibly ineligible to seek the office because of the U.S. Constitution’s requirement that the chief executive of the nation be a “natural born Citizen.”  Cruz was born in Calgary, Alberta, Canada on December 22, 1970.

Until Cruz announced his official aspirations last year, average Americans understood the “natural born Citizen” clause to mean “born in the country” and a person who has not acquired U.S. citizenship by the process of naturalization.

Cruz claims he is a “natural born Citizen” by virtue of his mother’s birth in the U.S. and consequent U.S. citizenship. His father was born in Cuba and not become a U.S. citizen into 2005.

In August 2013, The Dallas Morning News published an image said to be a scan of Cruz’s birth certificate showing that he was born in Calgary to parents Rafael Bienvenido Cruz and Eleanor Elizabeth Wilson.  The elder Cruz was noted to have been born in Matanzas, Cuba, while the candidate’s mother’s birthplace was stated as “Wilmington, Delaware, U.S.A.”

In 2012, Cruz ran for the U.S. Senate without informing the voters, who became his constituents once he was elected, that he was a Canadian citizen.  He also worked at the Federal Trade Commission and as Texas Solicitor General before running for the U.S. Senate.

Canadian citizenship renunciation forms ask the applicant whether or not he or she possesses or will possess citizenship in another country so as to avoid becoming stateless.

While the current form was revised in June of last year, The Post & Email reported the detail prior to that time by linking to the document available at the same Canadian government website.

Whether or not Cruz was declared a U.S. citizen at birth is an open question, as he has produced no documentation such as a Certificate of U.S. Citizenship, Consular Record of Birth Abroad (CRBA), or U.S. passport. The Dallas Morning News reported in its August 2013 article that according to Cruz’s spokeswoman, Cruz traveled to Europe in 1986 on a U.S. passport.

As in 2011 with Barack Hussein Obama, Trump has continued to make the case that Cruz might be seeking an office for which he is not constitutionally eligible.  “Ted Cruz is an anchor baby in Canada, right” Trump asked a rally audience on Friday.

On April 27, 2011, the White House released what it said was a scan of a certified copy of Obama’s “long-form” birth certificate obtained from the Hawaii Department of Health. Within 48 hours, however, experts deemed the image fraudulent, and a criminal investigation launched in September of that year confirmed those findings in March 2012.

Numerous unsuccessful attempts by members of Congress have been made since 1975 to abolish the “natural born Citizen” requirement to allow naturalized citizens to serve as president.  On October 28, 2013, Catholic University Professor of Law Sarah Helene Duggin wrote in regard to speculation that Cruz might seek the presidency, “A scholarly consensus is emerging…that anyone who acquires citizenship at birth is natural born for purposes of Article II.”

Although Cruz claims that he is a “natural born American,” he has shown no documentation connecting him at birth to the United States. While a statute passed by Congress which took effect in 1934 states that U.S. citizenship to a child born abroad could be acquired through the mother rather than only the father, as had been the case before, Cruz has failed to produce a form or certificate of citizenship which he might have acquired from the U.S. State Department upon his registration as a U.S. citizen born abroad.

Article II, Section 1, clause 5 of the U.S. Constitution contains the three requirements the Framers set forth for the president and commander-in-chief of the U.S. military: residency within the United States for 14 years; at least 35 years of age; and a “natural born Citizen.”

Rep. Alan Grayson, a Democrat who has stated that he will file a lawsuit if Cruz is declared the Republican presidential nominee, has been joined by at least two citizens who have already filed lawsuits, one in Texas and one in Utah.

In an interview with CNN, Cruz declared that he never held a Canadian passport and that speculation over his in eligibility is a “silly sideshow.”

Following the posting of the long-form birth certificate image in 2011, Obama gave a brief conference during which he called doubts about his eligibility “sideshows” emanating from “carnival barkers.”

In an interview with “Freedom Friday” host Carl Gallups on January 22, Rafael Bienvenido Cruz claimed that his son is eligible for the presidency, citing the Naturalization Act of 1790.   The wording of the Act reads:

Ted Cruz has cited the same statute in public statements:

However, the 1790 Act was replaced in 1795, with reference to “natural born Citizens” removed.

Those who interpret the U.S. Constitution strictly take into account only what was meant by the term “natural born Citizen” at the time of the writing and ratification of the founding document, notwithstanding any statutes passed later.  They believe that the citizenship status of the parents is equally important to the person’s birthplace, if not more so.

The elder Cruz also referred to an editorial published in the Harvard Law Review approximately 10 days before his son declared himself a presidential candidate in which former solicitors General Neal Katyal and Paul Clement stated that anyone born anywhere in the world to one U.S-.citizen parent is him- or herself a “natural born Citizen.”

Gallups countered with the fact that the U.S. Senate in April 2008 had declared Sen. John McCain a natural born Citizen because of his birth to two U.S.-citizen parents, although outside the United States, in Panama.

Last April, The Post & Email wrote a letter, sent by certified mail with receipt returned, asking Cruz to produce documentation showing that he was registered at birth as a U.S. citizen and other documentation tying him to the United States.  We received no response, nor has Cruz released further documentation.

Several law professors, including one of Cruz’s Harvard Law School instructor, Laurence Tribe, have opined that despite Cruz’s assertions to the contrary, the matter of his eligibility is not “settled.”  Some have said directly that he is ineligible because of his birth outside of the United States.

Major media have reported that unnamed “legal experts” have generally agreed that Cruz is eligible, although one news source, Fox News Channel, reported three years ago that Cruz was not eligible.

Senator Marco Rubio, who was born in 1971 in Florida to two Cuban-citizen parents not yet naturalized, is another presidential candidate whose eligibility has been questioned. A candidate who suspended his campaign in November, Louisiana Governor Bobby Jindal, was born in virtually the same circumstances in Louisiana to citizens of India attending college legally in the United States.

Following the publication of Cruz’s mother’s birth certificate at Breitbart, The Post & Email was contacted by a retired career Social Security Administration employee, who told us:

I worked for the Social Security Administration for 34 years and this document is not acceptable.  An acceptable record of birth must be a certified copy.  It must be stamp and signed showing who, when, and where it was issued.  It must also be issued by the appropriate agency and /or bureau.  The Program Operations Manual System (POMS) are the operating instructions for the Social Security Administration.  See the definition of certified copy below.

Also shown below is information from Delaware.gov showing that the appropriate custodian would be the Delaware Public Archives.  After 72 years, birth records become a public record.  This means that any journalist can request a proper certified copy and find out if the copy issued by Cruz’s campaign is accurate.

The other problem with the birth certificate for Cruz’s mother is that several entries were made with what appears to be a ball point pen and the rest by a fountain pen.  Ballpoint pens were not in common usage until after WWII and his mother was born in 1934.  The following fields appear to have been added by a different person at a different time and with a different pen:

These fields are printed and the rest of the document are done in cursive.

The signature of the parents also appear to be completed with a ballpoint rather than a fountain pen.

The other problem is that the address for the parents do not match.  One shows 7th St. and the other shows 17th St.  And is it N or W 7th or 17th street.

The Post & Email researched Delaware vital statistics laws and found that vital records, in fact, do become public after 72 years. We therefore sent the following letter, along with a form downloaded from the Delaware Office of Vital Statistics website and the required $25 fee to obtain a certified copy of Eleanor Darragh’s birth certificate. On Friday, The Post & Email received a certified copy of Darragh’s birth certificate from the Delaware Public Archives located at 121 Martin Luther King Jr. Boulevard North in Dover, DE 19901, a different address from where we had sent our request. An enlarged version of the Breitbart Darragh birth certificate posted on Scribd contrasts with that received by The Post & Email’s paper copy, which possesses a watermark in its center, an aquamarine border, a stamped signature at the bottom with the caption “State Archivist” underneath, and a seal which this writer can feel.

The top of The Post & Email’s document contains two additional headings not found on the Breitbart version: one which titles the document “Certification of Vital Record” and another below, of “State of Delaware” in old English typeface, with left and right sub-headings of “Department of State” and “Delaware Public Archives,” respectively.

Before requesting the document, the retired Social Security employee additionally wrote to us in an email:

To Prove his citizenship, Ted Cruz has two options:

After Cruz declared his candidacy, The Post & Email submitted FOIA requests to the State Department and USCIS for any documents the agencies might hold on Cruz but was denied access because of “privacy” laws.

On January 5, Trump told The Washington Post that Cruz possesses a “double passport.”   In a January 7 interview with CNN, Cruz denied ever having a Canadian passport.

On January 16, Lori Stacey, writing at The Examiner, cited the Canadian Citizenship Act, which did not recognize dual citizenship in that country until it was amended in 1977, seven years after Cruz’s birth in Calgary.

The Post & Email notes that while Cruz’s mother is referred to as “Eleanor Elizabeth,” there is no middle name or initial indicated on her birth certificate.

Both Cruz and Obama have been said by the media to have enjoyed a “meteoric rise” which catapulted them on to the national political stage.

On December 2, 2015, RawStory reported of an interview Cruz conducted with The Guardian:

He deplores the direction Obama has taken at home and abroad, but praises him as someone who has”demonstrated real courage” in fighting for his principles. And his admiration for the “potent” Obama election machine is so great he admits buying copies of Democratic campaign manager David Plouffe’s memoirs to hand out to his own staff during his successful 2012 Senate race. “Obama ran a masterful campaign. It was a grassroots guerilla campaign, encircled the Hillary campaign before they knew what hit them.”