DOUBLE STANDARDS AND POLLUTION CONTINUE, WHILE THE FEDS EXONERATE THEMSELVES FROM BLAME 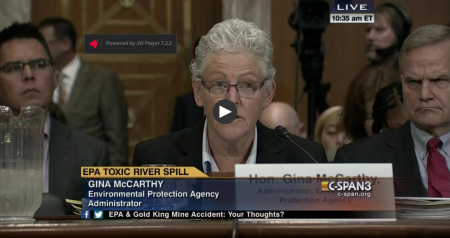 (Dec. 23, 2015) — When a private citizen or company violates rules, misrepresents facts or pollutes a river, government penalties are swift and severe. It’s different when the government lies or messes up.

Two weeks ago, Secretary of the Interior Sally Jewell testified before Congress on a toxic spill that federal and state agencies unleashed into western state rivers last August. Supervised by officials from the US Environmental Protection Agency (EPA) and Colorado Division of Reclamation, Mining and Safety (DRMS), an Environmental Restoration (ER) company crew excavated tons of rock and debris that had blocked the portal (entrance or adit) to the Gold King Mine above Silverton, Colorado.

The crew kept digging until the remaining blockage burst open, spilling 3,000,000 gallons of acidic water laden with iron, lead, cadmium, mercury and other heavy metals. The toxic flood contaminated the Animas and San Juan Rivers, all the way to Lake Powell in Utah. EPA then waited an entire day before notifying downstream mayors, health officials, families, kayakers, fishermen, farmers and ranchers that the water they were drinking, paddling in, or using for crops and livestock was contaminated.

Ms. Jewell told Congress she was unaware of anyone being fired, fined or even demoted. In fact, federal investigations and reports didn’t hold anyone responsible for the disaster. (Maybe they even got bonuses.) Considering the spill’s severity, the gross incompetence of government officials, their advance knowledge of the dangers, and the way they downplayed and whitewashed their actions, this is intolerable.

EPA Administrator Gina McCarthy did say she was “absolutely, deeply sorry.” But then FEMA denied disaster relief to the Navajos, and EPA sent them emergency water tanks contaminated with oil!

As I explained in a detailed analysis, experts had warned that contaminated water had probably backed up hundreds of feet upward into the mine, creating the risk of a sudden, powerful toxic flashflood. EPA, DRMS and ER’s prior experience with nearby mines meant they personally knew the high risks in advance. In a June 2014 work plan for the planned cleanup, ER itself had warned: “Conditions may exist that could result in a blowout of the blockages and cause a release of large volumes of contaminated mine waters and sediment from inside the mine, which contain concentrated heavy metals.”

Yet they went ahead, with no emergency plans for dealing with a toxic spill. They didn’t even follow their own ill-conceived plan. As the contamination moved downstream, they claimed they had simply “miscalculated” how much water had backed up and insisted they had been “very careful.” Barely a week after the spill, Ms. McCarthy said the river is “restoring itself” to “pre-spill conditions” – something she would never say if a privately owned company had caused similar contamination. 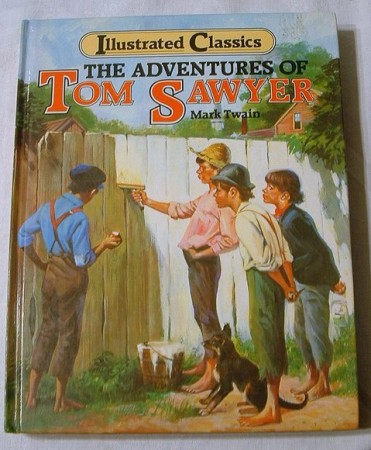 On August 24, EPA issued a preliminary report that can only be called a Tom Sawyer whitewash, designed to absolve the perpetrators of any blame, liability, civil penalty or criminal prosecution.

It says the state and federal personnel at Gold King were “senior mining experts” and “experienced professionals” who have “extensive experience with the investigation and closure of mines.” But their names were all redacted from the summary, and their actions strongly suggest that they had little training or experience in reopening mines or dealing with possible water impoundments and toxic spills.

The EPA/DRMS determination that there was “no or low mine water pressurization” at Gold King was supposedly based on actual observations. However, the EPA review team said it “was not able to identify any calculations made on the possible volume of water that could be held behind the portal plug.”

In fact, the “professionals” simply claimed ongoing mine drainage showed that a pressure buildup was not likely. Wrong. It simply showed that the compacted overburden was able to hold back an enormous volume of water – until they destroyed its structural integrity. They also said a similar excavation at a nearby mine “did not result in a blowout.” But that’s irrelevant. Every mine is unique and must be treated as if a worst-case scenario could unfold. The other mine didn’t have serious water backup; Gold King did.

Perhaps the most blatant example of self-serving excuses is on page 7, which says in relevant part:

“Mine water pressurization data from behind the blockage potentially could have been obtained through a drill hole inserted further back into the [Gold King] Adit from above the mine tunnel. Such a technique was … not used at the [Gold King] Adit [because it] would have been very difficult and expensive … and require much more planning and multiple field seasons to accomplish. Although difficult and therefore expensive and technically challenging, this procedure may have been able to discover the pressurized conditions that turned out to cause the blowout.” [emphasis added]

In truth, the crew could easily have drilled a borehole lined with steel pipe from above the portal into an area behind the blockage, and then used simple instruments to determine the water pressure and extent of water backup, before beginning to dig. They had done this elsewhere and at could have done it at Gold King for less than $75,000, experienced miners told me. It was not “technically challenging.”

These “experienced professionals” guessed but did not test. They simply assumed there was limited water in the mine, and charged blindly ahead. And they did it after bullying their way onto the Gold King premises by threatening its owner with $35,000 per day in fines if he did not allow them on his property.

Their actions were grossly negligent. In fact, they are criminal offenses under the Clean Water Act and other laws that the government routinely uses to fine and jail private citizens and company employees, such as John Pozsgai, Bill Ellen, and employees of Freedom Industries and the Pacific & Arctic Railway. None of these “convicted felons” intended to cause those accidents, and all were “absolutely, deeply sorry” for what happened. Why should the state and federal culprits be treated any differently – get off scot free – after causing far worse environmental damage?

The mine is now leaking 500-900 gallons per minute: 720,000 to 1,300,000 gallons per day – a huge increase in pollution into these important waterways. Until winter set in, most of it was finally being treated before entering Cement Creek, the Animas River and downstream waters.

So we must ask, what was the emergency that “forced” the EPA and DRMS to return to Gold King, demand immediate access to the site – and proceed in such a hasty, negligent manner? Unfortunately, this incident and the whitewashing that followed is too typical of government agencies that have become increasingly dictatorial, unaccountable, and dismissive of other interests, outside expertise, and people’s needs for jobs, minerals, energy and quality living standards.

Today, throughout the Rocky Mountain region, waters are still polluted by metals and minerals that are present in underground mines … along with the gold and silver that have long drawn prospectors, created jobs, and built state and local economies. Hopefully, effluents from all these abandoned mines will soon be minimized via practical, efficient, low-maintenance treatment systems, under legal regimes that do not assign unlimited liability to private sector entities that try to fix these problems.

That will greatly improve water quality in many streams – while suggestions presented in EPA’s otherwise shoddy internal review could do much to prevent a repeat of Gold King, if they are followed.

Meanwhile, Congress and state legislatures should further investigate the Gold King disaster, and compel witnesses to testify under oath. They should also improve relevant laws, ensure that agency personnel are truly qualified to do their tasks, and hold agency incompetents and miscreants accountable.

­­­­­­­­­­­­­­­­­­­­Paul Driessen is senior policy analyst for the Committee For A Constructive Tomorrow (www.CFACT.org) and author of Eco-Imperialism: Green power – Black death.