ABOARD A 100-MILLION-DOLLAR SINKING SHIP 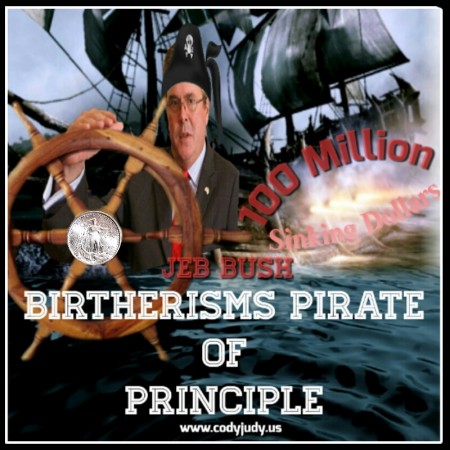 A few weeks ago now I wrote Jeb Bush a private letter. Oftentimes as we see with the varying Republican Campaign Managers voicing a get-together on a particular vexing problem mutually troublesome like CNBC’s low-balling questions to Candidates in Wednesday night’s Republican Candidate Debate, Candidates even from across the aisle can reach out to one another for a mutual principle aggrieved for a more bi-partisan cause and effect.

“Out of your weaknesses which troubles you the most, and how are you going about fixing it?”, was in parlance one of those gotcha questions from CNBC Moderators in the debate last night meant to expose Candidates rather than Receive from their View a wisdom.

In their own defense, CNBC stuck up for their Moderators, stating a Candidate seeking the highest office must be able to field the toughest questions. However, it’s a little distracting from a “Candidate’s Debate” to embroil or overshadow a debate with the Moderator’s opinion.

We’ve yet to see, for instance, Hillary Clinton asked, ” Since you abandoned the cries for help of 4 people in Benghazi who were murdered, why should Americans not think you’d do the same for them?”

That question would parallel the one asked to Rubio (again parlanced), “Since you have failed in your own finances so miserably, why should America trust you with a Multiple Trillion dollar budget?” as if the Office of the President was entirely responsible and Congress had no say in it.

It is, of course, true, Candidates for President are indeed subject to Leadership Questions and all their character flaws are subjects of exposure. It’s a lot like being paraded out naked with only a podium to stand behind.

The objectivity of the questions being who’s left without blemish, or perhaps even a “Now you know how she feels” in a pay-back of a Moderator’s particular favorite. While not unreasonable, it is very uncomfortable standing naked in the cold for anyone.

Candidates with high expectations have a double-edged sword of trouble to face. That sword comes swiftly from opponents at and in Debate as well as the wealthiest contributors of the GOP who have ponied up over 100 Million Dollars so far for, say, a Candidate like Jeb Bush.

How would you like to be former Gov. Jeb Bush very close to the bottom in losing debates facing your 100 Million Dollars of Contributors this morning?

In multiple polls “Conservative Drudge” and “Liberal CNBC” both showed Bush in lower single digits far below ineligible Candidates Cruz and Rubio, thought by Bush early on to be freshman gnats to be swatted away with the Sledge of Fundraising prowess.

In an article featuring a big dose of “Forget your Principles; forget about Winning” entitled “The decline of Jeb Bush explained”– by Andrew Prokop , it was stated: http://www.vox.com/2015/10/28/9623320/jeb-bush-president-polls this jewel came shining through:

“That’s why the very small polling bump for Marco Rubio, not the soaring numbers of Trump and Carson, is Bush’s biggest threat.”