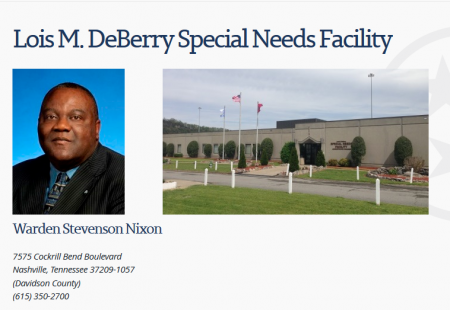 (Oct. 13, 2015) — The Post & Email has been informed by Linda Riddle, mother of Tennessee Department of Correction (TDOC) Timothy Aaron Baxter, that her son has undergone necessary surgery on his jaw which had caused a staph infection suspected of having affected other organs, causing extreme pain for months.

Baxter was first put in touch with us by fellow NWCX inmate Walter Francis Fitzpatrick, III.

Baxter was originally slated for surgery on July 13 but was unable to undergo it because medical professionals found that his red blood count was too low.

In August, Baxter told his father Lee, “I am really considering just giving up.”

On Thursday, Riddle wrote in an email, “He got sent to the special needs unit in Nashville on Wednesday the 7th for possibly surgery on his mouth. He had to file a lawsuit against the state to get any help. They served the lawsuit last week – so they are acting on it quickly. He is at Lois M. DeBerry Special Needs Facility.”

On Friday, Lee Baxter said that a doctor who had seen Tim denied that he had a staph infection.  “Tim disputes it,” Lee told us at the time.

After receiving Riddle’s email about the surgery, we asked her if her son had, in fact, had a staph infection, to which she responded, “When Tim had maxillofacial surgery one of his wisdom teeth was left in due to it being imbedded in bone. They removed it last Thursday. Hopefully this was his problem and he will be on the road to recovery.”

Riddle said she spoke with Tim on Sunday evening.  We extended our wishes to Riddle for a speedy recovery for her son.

Various inmates have reported that obtaining medical care within Tennessee’s prison system is very difficult, at best.  In Tuesday’s mail, The Post & Email received a letter dated October 6 from inmate Jeffery Douglas, who suffers from chronic kidney failure, reporting that he had blood taken by a nurse last week but did not see a doctor for his symptoms.  Douglas said he was tested for “potassium and vitamin B deficiency.”

Referring to a weekly menu enclosed with his letter last week, Douglas added, “As you can see by the menu I sent, we are lacking a lot.”

The menu contained many starches, especially at breakfast, and what appeared to be minimal protein.

“As of this letter, the only being done [sic] around here is the Deficienty, Malfunction, Malice, Malign & Malignant toward inmates, & done at the inmate’s expense & life,” he continued.

On October 5, inmate Donald Lynch also reported, through Douglas, who is his cellmate, that he has been requesting a wheelchair “to get to & from Special Needs without injuring himself.”  Lynch is 74 years old and has fallen several times during transport to the “special needs,” or medical, facility in Nashville.

“Today Dr. Tucker seen Donald, & told him he could die from the hernia’s & he needed to go to Special Needs.  Donald states he tried to explain to Dr. Tucker his condition & the danger of falling getting on & off the bus,” Douglas wrote for Lynch.  “Donald further states that Dr. Tucker did not want to hear about his problems.” 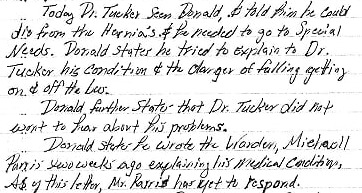 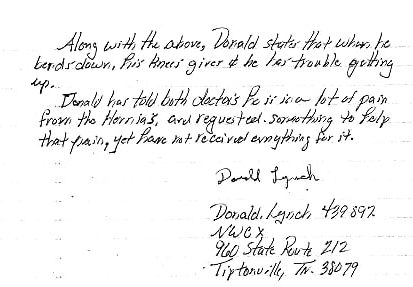 Lynch also reported through Douglas that he has congestive heart failure.

Inmate Michael Bowers reported that he has incurred a permanent injury as a result of inappropriate follow-up care to hernia surgery.