WILL THEY GET THE MESSAGE?

(Jun. 5, 2015) — At 4:00 p.m. EDT on Friday, The Post & Email contacted the Tennessee Department of Corrections (TDOC) Commissioner’s office at (615) 253-8200 and spoke with Communications Director Neysa Taylor regarding a request for medical and dental attention received from CDR Walter Francis Fitzpatrick, III (Ret.) in a letter on Wednesday.

We provided Taylor Fitzpatrick’s full name, inmate number, prison location, and the limited information we received about his condition.

We additionally reported that Timothy Aaron Baxter, who is housed at the NWCX complex in Tiptonville with Fitzpatrick, is in need of medical attention for migraine headaches and the loss of the use of his left arm following a prison assault in September 2009 for which he has filed a federal lawsuit, 2:10-cv-02667-STA-tmp, against the State of Tennessee.

Taylor is the same individual who informed us some weeks ago that the TDOC possesses no record of Baxter’s assault, which occurred while he was picking vegetables on a work detail just days away from release.  Baxter reported that after the beating, he was “thrown in the hole” and handcuffed so tightly that both of his wrists are permanently damaged. In a phone call from prison last month, Baxter described his wrists as having turned “black”  for two weeks.

Baxter has reported ringing in his ears from having been hit on the back of his head with a radio by a corrections officer before being thrown to the ground and pummeled by the officer and his brother as an inmate looked on.  In a letter to The Post & Email, he also cited nerve damage and the need for surgery for his injuries.

The inmate who watched, Arthur Mallory, is first-named defendant in Baxter’s lawsuit.

In a habeas corpus filing on June 2 emanating from the U.S. District Court for the Western District of Tennessee, Judge S. Thomas Anderson directed U.S. Marshal Jeffrey Holt and NWCX Warden Mike Parris to transport Baxter to the federal courthouse in Jackson, TN on June 16, 2015 at 1:30 p.m. local time. 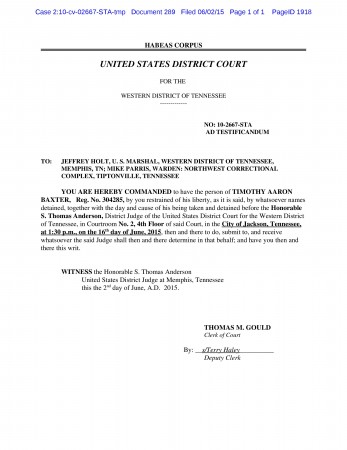 The Post & Email asked Taylor the procedure following our call, to which she responded that she would relay the information to the medical staff at NWCX.  She said she is prevented by HIPAA laws from disclosing whether or not the inmate(s) receive medical attention.

On May 9, we wrote a letter to Commissioner Derrick Schofield to ask why no record of the assault existed to which we have received no response.

Fitzpatrick has requested that those following the developments in his case which resulted in a three-year prison sentence on convictions of “aggravated perjury” and “extortion” meted out by retiring Senior Judge Jon Kerry Blackwood last August call the office of the appellate court in Knoxville which heard his appeal on May 19 and the FBI regarding the proven corruption in the Tennessee courts.

On Friday afternoon, The Post & Email spoke with Appellate Court Clerk Joanne Newsome at length about the hand-picked grand jury foremen in Tennessee, citing the Baxter, Parsons, Fitzpatrick, and Raudenbush cases as examples.  Newsome listened courteously and claimed to be unaware of the process by which grand jury foremen are chosen in her state.

The Post & Email offered Newsome a complimentary subscription in the event she wished to see documentary proof of our claims, which she politely declined.

On Thursday, The Post & Email contacted the warden’s office at NWCX about Fitzpatrick’s request for medical attention but did not receive a return phone call.