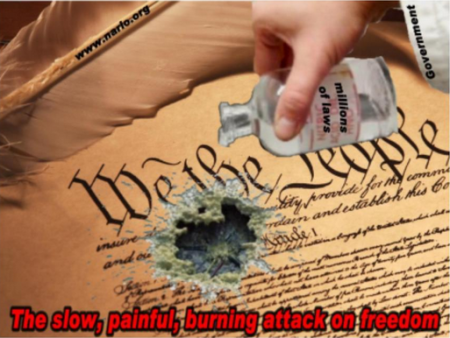 (May 10, 2015) — “The Framers of the Bill of Rights did not purport to ‘create’ rights. Rather, they designed the Bill of Rights to prohibit our Government from infringing rights and liberties presumed to be preexisting.” — William J. Brennan, Jr.

Because of our own difficulties with the Internal Revenue Service (IRS), we have been exchanging e-mails with a gentleman whose battle with the IRS makes our problem seem like a pleasant walk in the forest on a sunny day.  The IRS is after him for taxes on income he never received.  They are after him for millions of dollars in taxes and they won’t let up.  They just stole $45,000 from him with the court’s permission and they denied his constant requests for a trial by jury as required by the 7th Amendment to the Constitution.

But the 7th Amendment is not the only Amendment under a silent, vicious attack by government.  Let’s take the 8th Amendment for example, which states: “Excessive bail shall not be required, nor excessive fines imposed, nor cruel and unusual punishments inflicted. “

Nevertheless, the Environmental Protection Agency (EPA) can fine a property owner as much as $75,000 PER DAY per violation of alleged (unproven) violations of the Clean Water Act.  Anyone who says this isn’t an excessive fine, that violates the 8th Amendment, is 10 cards short of a full deck.  It is definitely “cruel and unusual.”  The EPA, as well as the Army Corps of Engineers, unilaterally asserts that they have dictatorial control over every drop of water in America, pursuant to the Clean Water Act.  Except that, there is no such legal authority.  Their legal authority only extends to “navigable” waters.  It was only just recently that the U. S. Supreme Court allowed property owners judicial review of EPA allegations.  Before, the only redress a person had against the EPA was through an EPA hearing examiner. Can anyone say, the fox is guarding the hen house?

In addition, the IRS can penalize a taxpayer $5,000 for not signing the perjury statement at the bottom of Form 1040, even though the taxpayer perjures him or herself every time he signs the perjury statement.  In one of our many Affidavits we sent to the IRS, in our continuing battle with them, we listed the following as one of the conditions before we would comply with the terms of an IRS Notice:

(NOTE: Twice, the response to our Affidavits was to come back with NO TAXES DUE. Except in one case they came back with a $10,000 fine. We’re still fighting that one.)

Last week, in our article entitled, “America, The Land of Censored Conservative Speech” we wrote of the attack on our First Amendment right of free speech by outright censorship of conservative messages by government, activists and even industry. (By the way, Comcast has suddenly become very attentive to our wants and needs, even giving us our own private tech person with a direct phone line and extension.)

The five elements of the First Amendment, including free speech, have been under attack by the federal government, the left and special interests for decades.  The free expression of religion and the sanctity of religious belief (especially Christians) have been berated as a bunch of religious fanatics “clinging to their bibles and their guns.” (Obama’s words)  The right of “peaceable assembly” has been, in many cases, relegated to government-designated “free speech zones.”  Petitioning government for the “redress of grievances” has essentially evaporated when the government tells the people, “Ha! Ha! You can’t sue us.”  And the so-called “free press” is a joke.  The “free press” is owned, lock, stock and barrel, by special interests, mostly on the left, and is now subject to FCC mandated “Net Neutrality.”  But it is the intent of the liberals in the FCC ruling that “Net Neutrality” only applies to the conservative free press.

Which brings us to the 2nd Amendment, the right of the people to own guns for personal defense and as a substantial deterrent against government tyranny.  If it were not for the powerful lobbying of the National Rifle Association (NRA) and those millions of gun-owning individuals that support the NRA with their money, the 2nd Amendment would be a pile of ashes left over from an arson fire, started by the self-righteous, sanctimonious liberal left who never saw a gun law they didn’t like.  Here is a very powerful opinion piece on an attack on the 2nd Amendment by a courageous author:

You can pretty well kiss goodbye the 4th Amendment that protects citizens from unreasonable search and seizures.  The federal government can do warrantless wiretaps and property searches and seizures anytime they want.  They can listen in on your telephone conversations, read your e-mails and track you on social media.  And let’s not forget the case of civil seizure laws where government can “take” your property for just about any reason they can invent and keep it. It can take years of legal wrangling in the courts to get your property back, that is, if you can afford it.

In Wisconsin a highly politicized liberal District Attorney got a judge to sign a multitude of search warrants with trumped-up probable cause allegations on “conservative” citizens for alleged violations of campaign finance laws as vengeance against Governor Scott Walker.

Nighttime SWAT team raids on private citizens, including the Wisconsin conservatives, have become commonplace, with or without warrants.  In one case we know of in Louisiana, a local jurisdiction passed an ordinance that a property owner couldn’t have inoperable vehicles on their property.  One property owner was, under the ordinance, subjected to the warrantless removal of two cars he was restoring, right out of a carport on his property.

If you think you cannot be deprived of your life, liberty and the pursuit of happiness (the 5th Amendment), by government, local, state, or federal, think again.  Environmental and social justice laws have all but abolished life, liberty and the pursuit of happiness.  If you believe that government can’t take your property under eminent domain for other than a clear government purpose, you are living under an illusion.  They do it every day.  If you believe you cannot be a witness against yourself, then you had better not sign the perjury statement on IRS Form 1040.

Under the 6th Amendment an American citizen is entitled to a speedy and public trial by a jury of his or her peers and the defendant gets to confront the “witness or witnesses against him.”  Au contraire!  In many cases, such as an IRS case, the only real witnesses are the attorneys for the IRS.  An attorney is not a witness.  Your neighbor may call in an ordinance violation on you to the local authorities, anonymously, of course, for something you did or didn’t do on your property.  The government will protect that anonymous witness and you will never get to confront your accuser.

Then there are the 9th and 10th Amendments that “grant all other rights to the states and the people.”  The federal government has been very clever in taking the money from federal income taxes and using it as a bribe to get the state governments to comply with federal policy.  The states, hungry for federal money because they burned up all the state’s money in free stuff to the undeserving, illegal aliens, union demands and insane environmental mandates, will comply with the FEDS while abdicating the state’s and the people’s rights under the 9th and 10th Amendments.  The power of the federal government increases by these cowardly abdications and continually erodes the rights of the states and the people.

The pattern of the continual expansion of federal government civil control over the states and the people is blatant, overt, arrogant and outright unconstitutional.  The militarization of America by the U. S. Military, at the direction of the Executive Branch, as we discussed in a previous article, is even more evidence of that growing power by the FEDS, literally putting the people under the threat of death by the gun if they don’t knuckle under.  Every day, the states and the people capitulate to this growing federal power.  The final result of this capitulation, civil or military, is abject slavery.

Let’s face it, ladies and gentlemen.  The Bill of Rights, the foundation of the U. S. Constitution, codifying into law the natural and unalienable rights of the free and sovereign citizens of America, has been steadily and silently eaten away by an acrid “acid” disguised in millions of unconstitutional laws, to the point that the individual rights contained in the first ten Amendments to the Constitution are all but meaningless.

Sadly, the people have only themselves to blame.  Only an in-your-face “Declaration of Open Defiance and Resistance by millions of Americans can stop and then reverse the Slow, Torturous, Silent Repeal of the Bill of Rights.

But then if you like your rights being taken away and it is OK with you that your sweat, blood and tears are taken at the point of a gun and wasted on freeloaders, illegal aliens, environmental insanity, social justice, indoctrination posing as education, political correctness, endless bureaucratic inefficiency, fraud, abuse, corruption and the move towards a one-world order, then there is no need to make such a Declaration, especially if you fear the government.  The Ukrainians feared their government, and Stalin, using his military, starved to death an estimated 7,000,000 of them.
– – – – – – – – – – – – – – – – – – – – –
NOTE:  The foregoing article represents the opinion of the author and is not necessarily shared by the owners, representatives, employees, or agents of the publisher.
———————————-

The Slow, Torturous, Silent Repeal of the Bill of Rights added on Sunday, May 10, 2015

One Response to "The Slow, Torturous, Silent Repeal of the Bill of Rights"