Last week, it was disclosed by The New York Times and other major media that former Secretary of State Hillary Clinton sent emails associated with her work at the State Department through a dedicated server set up at her Chappaqua, NY home in violation of published department policy.

The revelations have affected numerous FOIA requests and lawsuits which had sought State Department emails and were replied to with the claim that no responsive documents existed.  Judicial Watch President Tom Fitton told Fox News on Thursday evening that Clinton could be prosecuted criminally for sequestering her emails for the four years she served as Obama’s Secretary of State.

Atty. Larry Klayman has called for a hearing on a contempt charge against Clinton and her senior aide, Cheryl Mills following the revelations about Clinton’s emails.

Over the summer of 2014, government watchdog group Cause of Action reported that any FOIA requests containing what the Obama regime termed “White House equities” were sent to political operatives for review.  The AP stated that the practice had begun at least in 2010 within the Department of Homeland Security (DHS), which reportedly “probed for information about the requesters.”

Root is a 1983 graduate of Columbia University who claimed more than two years ago that “Obama has a big skeleton in his closet” identified as “his college records,” which have not been released to the public.

In 2007 and 2008, Obama was not vetted by the media, and anyone attempting to delve into his background was immediately termed a “racist” because Obama is reportedly half-black and half-white.

Root wrote in a column at Fox News in 2013 and told The Blaze in 2012 that he was audited by the IRS during the time which former IRS supervisor Lois Lerner admitted “targeting” of Tea Party and other right-leaning groups was conducted.  Root termed his case “the face of Team Obama’s IRS attacks.”

Businessman Donald Trump has also voiced the opinion that Obama’s as-yet undisclosed college records contains information that might reveal key information about his background which could determine whether or not he was ever eligible to hold office.  Trump stated last year at the National Press Club that he believes that Obama’s university applications have remained secret for one of two reasons:   he completed them claiming to be a foreign-citizen student to obtain special financial aid when he was actually a U.S. citizen; or he truthfully stated that he was a foreign student.

Trump also placed tremendous pressure on the White House to release what it claimed was Obama’s long-form birth certificate on April 27, 2011, which was quickly denounced as a forgery by experts.

On Saturday, The Post & Email responded to Root’s Twitter claim that Jarrett “ran it all” with, “Is she behind the birth certificate and Selective Service forgeries?” referring to the findings of the Maricopa County, AZ Cold Case Posse which determined more than three years ago that Obama’s only publicly-available “documents” are “computer-generated forgeries.” 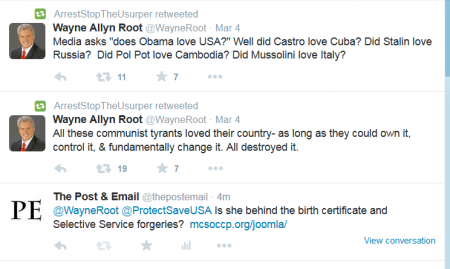 Jarrett has been known as “the other side of Obama’s brain” and is suspected of directing many, if not all of, decisions which have emanated from the White House.  Following the 2012 election, Jarrett was quoted as having said:

After we win this election, it’s our turn.  Payback time.  Everyone not with us is against us and they better be ready because we don’t forget. The ones who helped us will be rewarded, the ones who opposed us will get what they deserve. There is going to be hell to pay.  Congress won’t be a problem for us this time. No election to worry about after this is over and we have two judges ready to go.

In September 2012, The New York Times termed Jarrett “the other power in the West Wing.”  Jarrett reportedly has ties to former domestic terrorist William Ayers, who Obama described as “just a guy in the neighborhood” during the 2008 campaign.

Jarrett reportedly advised Obama on three occasions not to have the U.S. military kill Osama bin Laden, the architect of the 9-11 terrorist attacks on September 11, 2001.

Pfeiffer’s photo appears to the upper right of the long-form birth certificate forgery at the White House website.

In January, White House adviser John Podesta announced his departure to assist Clinton, perhaps as her campaign manager, once she announces her final decision.

Some have suggested that the disclosure of Clinton’s use of private email will affect her ability to launch her campaign.  Clinton reportedly released 55,000 pages of emails at the request of the department she formerly headed, but it is unknown if “she released everything.”

Hillary and Bill Clinton reportedly know or strongly suspect that Obama was never eligible for the presidency as an Article II, Section 1, clause 5 “natural born Citizen,” as claimed by filmmaker Bettina Viviano, who participated in a conference call with Bill Clinton in 2008.

On Friday, Jarrett told Bloomberg TV that during her tenure as Obama’s adviser, “I have not received an email from Secretary Clinton.” She claimed that Obama continues to “believe in transparency,” a promise Obama made upon taking office, perhaps unconstitutionally and illegally, on January 20, 2009.

As reported before the 2012 election by The New York Times, Jarrett, who is Iranian-born, reportedly facilitated “secret talks” with Iran, with whom diplomatic relations were suspended after the 1979 hostage crisis.  The Times article has been removed from the web, as evidenced by a dead link embedded in a November 5, 2012 Breitbart article.  The Obama regime is now negotiating with Iran to allow the rogue nation to maintain its nuclear program, prompting Israeli Prime Minister Benjamin Netanyahu to address Congress this past Tuesday on the specter of a nuclear-armed Iran and conflagration in the Middle East.

In a May 2013 interview, Zullo told The Post & Email that the fraudulent birth certificate was created and posted “with the intent to deceive.”

Congress has declined to seek impeachment for Obama despite claims made almost two years ago by members of the House of Representatives that enough votes in favor of impeachment were most likely available.  Obama has been accused by some of treason and for being an agent, if not a full-fledged member, of The Muslim Brotherhood, as discussed on the WheresObamasBirthCertificate.com radio show on Friday night.

Obama has allowed an “unprecedented” number of illegal aliens into the United States, announcing in November 2014 that he would defer deportations for millions which would currently be required by existing immigration law.  Late last month, Congress provided funding for Obama’s plans made by “executive action” despite Republicans’ campaign promises to block it.

A researcher and panelist on Friday’s radio show, The Washington Times’s Bethany Blankley, stated that Obama appears not to be a U.S. citizen, about which The Post & Email queried her in a follow-up email after calling in to the show to ask for further detail on her statement.  On Saturday, Blankley released a column which echoed many of her thoughts expressed on the broadcast entitled, “Protect Families and God-Given Rights from Tyranny.”

In a reference to Adolf Hitler’s 1933 election in Germany, Blankley wrote on page 2:

Three generations later, more than 50 percent of Americans voted — twice — for another Hitler in a different form. This man doesn’t need to openly conquer other countries; instead he funds Islamists to do far worse. This man orchestrates giving rights to non-citizens for which citizens must pay financially, forfeiting their own rights. This man and Congress choose not to protect law-abiding citizens from illegal immigrants and repeated criminal offenders who receive better benefits than military veterans.

What Would Valerie Jarrett’s Emails Reveal? added on Saturday, March 7, 2015

3 Responses to "What Would Valerie Jarrett’s Emails Reveal?"