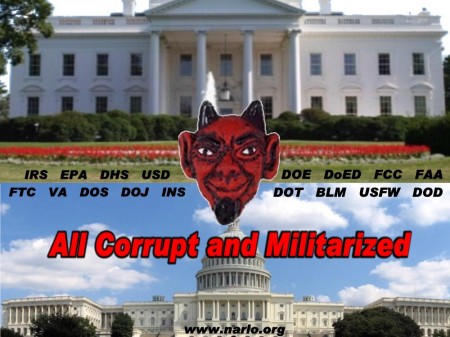 (Aug. 10, 2014) — The real question is, how far will the government go to subjugate, control and manipulate a once-free people?  So let’s start out with a series of unanswered questions.

1.         Why did the Department of Homeland Security (DHS), working on behalf of the Environmental Protection Agency (EPA), send a large, fully-armed SWAT team to confiscate a Land Rover from the owner because the EPA said the imported Land Rover did not meet EPA regulations?  Police State.

2.         Why did the Bureau of Land Management (BLM) send over 200 fully-armed SWAT team members to confiscate Cliven Bundy’s cattle in Nevada?  Police State.

3.         Why did DHS send out a fully-armed SWAT team to the Gibson Guitar Company because of an alleged violation of imported woods?  Police State.

5.         Why is the IRS targeting conservative groups for extra scrutiny and then trying to cover up their crime?  Police State.

6.         Why is the EPA authorized to seize money and property from a violator of environmental regulations when only the IRS allegedly has that power?  Police State.

7.         Why did Obama and the Democrats nationalize the health care system and force every American to pay for health insurance under Obama Care ….. a clear violation of individual rights guaranteed under the U.S. Constitution?  A Police State to control the masses.

8.         Why are Obama and the State Department covering up what happened in Benghazi on September 11, 2012?  Corruption and political cover-up at the highest level.

9.         Why are Obama and the Congress allowing hordes of illegal Mexicans, Central Americans and Middle East terrorists to cross our borders without penalty and then be distributed throughout the United States on the taxpayers’ dime, to merge into the shadows and never to be heard from again until Election Day?  To lock up political power for the left, in perpetuity.

The questions could go on and on, but you can only cover so much in the limited space of a single article.

Many say the Civil War was an orchestrated event by the U.S. Government under Abraham Lincoln.  Was it?  Some say the 16th Amendment was passed by the Federal Government in order to enslave the American people through the control of money by private individuals (the Federal Reserve) and unconstitutionally forcing the American people to pay income taxes to collateralize the loans made by the private Federal Reserve to the government.  There is evidence that the Federal Reserve, either by design or by gross negligence, caused the Great Depression from which FDR set about to turn America into a socialist nation.   FDR was hugely successful.  Obama can’t hold a candle to what FDR did, although he’s getting close.

President Hoover retained the University of Chicago (of course) and Harvard University to conduct a study on how to manipulate the masses through their subconscious minds.  The Rockefeller Foundation paid for the study.  Why?  Why would a government do that if they weren’t hell-bent on controlling large segments of the American people?  And why does the government want to control large segments of the American people in a free country?  Who’s pulling the strings?

Is it possible that the federal government, under President Johnson, purposely established the “Great Society” to make more of the American people dependent on government, knowing that dependent people are much more controllable, compliant ….. and loyal voters?

That government and government bureaucracies are corrupt, or that specific politicians are corrupt, is not a new phenomenon.  In fact, it was just reported on July 30th in United Press International that:

“According to Judicial Watch and the Washington Examiner, documents obtained in a Freedom of Information Act request show officials in the state department issued approval on 215 separate speaking engagements former President Bill Clinton made overseas during Hillary’s term as secretary of state—speaking engagements which netted the Clintons more than $48 million all paid for by foreign governments and multinational businesses with obvious interest in influencing both the current and future executive administration.”

Judicial Watch alleges that Bill Clinton’s speaking fees were tantamount to bribes to Hillary Clinton’s State Department.  If nothing else, it was a direct conflict of interest.  If true, this is the height of international intrigue and corruption.  If true, how can we trust either of them to be in charge of anything, much less Hillary Clinton becoming President of the United States?

But besides corruption, does true evil lurk in the halls of government?  In a land governed by the rule of law, has government, at every level, become essentially unconstitutional and lawless?  Can anyone say Obama, the IRS, BLM, NSA, Benghazi, Fast and Furious, etc., etc., etc?

For several years now, we have vehemently resisted those conspiracy theorists that promote the idea that the attack on 9/11/01 was a false flag event, staged by agencies within the federal government.  We kept asking the question, “Why would the American government take the chance to kill over 30,000 of its own people (if the Twin Towers came down on impact of the airplanes without time to evacuate the buildings)?”

Who set the charges on each floor of both towers to bring the buildings down in pancake fashion after the impact of the airplanes?  What did the government hope to gain?  Why would they blow up building 7?  What were they hiding?  Why would they fly an airplane into the Pentagon?  And did they?  Did Flight 93 actually hit a Pennsylvania field?   Flight 93 essentially evaporated into thin air with no evidence of a crash on the ground ….. just a round hole.  Malaysia Flight 17 in the Ukraine a few weeks ago left giant pieces of wreckage over a ten-mile-wide area.  How does an airplane evaporate on impact with the ground?  It doesn’t.

(NOTE: Watch for an update on Flight 93 in our next article.)

If all this is even partly true, what was government trying to accomplish?  How did all this planning take place without someone spilling the beans?  Is the American federal government truly that evil?

We have known Kirk MacKenzie of Defend Rural America for several years now.  Our organization was one of the sponsors when Kirk launched Defend Rural America.  He is not prone to wild guesses or unsubstantiated speculation.  Kirk has studied the evidence and woven together a credible picture surrounding the tragic events that took place on September 11, 2001 at New York’s Twin Towers, The Pentagon in Washington, DC and a Pennsylvania hay field.  He put his evidence together into a concise PDF file with photographs and documents which we have uploaded to our website HERE.  (http://www.narlo.org/911conspiracy.html)

We are not taking a position on this evidence.  The mainstream media and even Fox News have denied such a notion and give it no credibility whatsoever.  We are only putting it out there as a point of discussion in reference to the title of this article:

“Just How Evil and Corrupt is the American Government?”

The evidence that Kirk has assembled is compelling and thought-provoking, and even though we have significant questions surrounding this 911 theory, nevertheless, we were moved to represent it because of the credibility of the author and the information.

Ladies and gentlemen, there are many conspiracy theories out there on the Web and elsewhere, and most are discredited by the questions one must ask surrounding the theory.  The unanswered questions usually leave the theory in tatters.  The questions we ask in this article regarding the 911 Conspiracy Theory would seem to render the theory unsupportable.   But is it?  The only way to believe the theory is to believe that the American federal government has become the face of incarnate evil.  Has it?

History has shown us that governments and central bankers controlling policy and the flow of money, national or international, have colluded in the past to manipulate events in order to arrange a specific outcome desired by the colluding parties …… such as war.  Deceiving the masses by propaganda, myths, distortions, outright lies and false flag events are the methods used in that deceit.  As an author sitting on the outside, we cannot prove beyond a reasonable doubt that the American government has crossed over the line into totalitarianism.  We can only ask the question.

But that is why we just recently wrote the following two articles:

“Freedom Is a Fading Mirage on a Darkening Horizon”

“Just How Are You ‘Gonna’ Unravel This Banana Republic?”

From history we do know that the propensity for governments (any government) to seek absolute power over time is an obsession and a compulsion without equal.  To not watch government every minute of every day and hold them accountable to their sworn oath and duty to uphold the foundation of American freedom is tantamount to allowing that obsession to reach its final objective in a domain where only evil rules.  With the militarization of federal, state and local agencies, the growing lawlessness of all branches of government, a federal debt and deficit that shows no signs of abating and out-of-control bureaucracies used as political weapons, the evidence that the American government is nearing its objective of absolute power is mounting.  Could it also be true that the 911 Conspiracy Theory is no longer a theory and the American government, at all levels, is the evil face of our enslavement?

Just How Evil and Corrupt is the American Government? added on Sunday, August 10, 2014

3 Responses to "Just How Evil and Corrupt is the American Government?"