Falsely Accused Jonathan Fleming Gets Out of Prison after 25 Years – Now What?

“NOT EVEN AN APOLOGY” 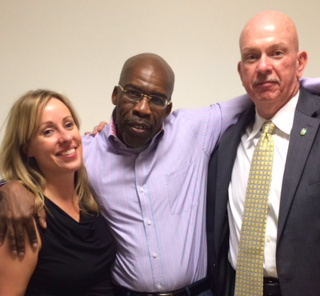 (Apr. 24, 2014) — Just a few weeks ago Jonathan Fleming was finally let out of prison after 25 years of hell for doing a crime he never committed.  This week I interviewed on my national radio show the hero investigators, Kim Anklin and Bob Rahn of Management Resources LTD of NY.  They were the determined and brave ones who took this case on when the family approached them.  They told me, though somewhat cynical at the start and not sure of Jonathan’s guilt or not, they committed to find the truth.  The more they dug, the more they exposed shoddy police and prosecution against Jonathan.

As the case unfolded, there was allegedly a remote and pregnant witness far away and higher up in a building next door, who was manipulated, even threatened into saying she saw Jonathan Fleming at the scene.  Under massive pressure, even the threat of her baby being taken away, she said she saw Jonathan among the three guys that night who had showed up to collect money from the guy who ended up dead.  The pathetic investigation followed the trail to setting up Jonathan because his car had been loaned to a friend who was one of the three at the scene when the shooting occurred.  Jonathan was instead in Disneyland with his family, had receipts, an airline ticket and witnesses.  Facts didn’t matter, however.  Call it pathetic laziness.  Call it simply ego and corruption but the prosecutors, sure that Jonathan was their guy, ‘built’ a case with the threatened and incorrect witness.  Tragically, there was a real and accurate witness who saw all three men and confirmed that Jonathan was not there.  You guessed it.  The prosecution disregarded the honest and real witness because she didn’t fit the lying mold they were already building against Jonathan.  Corruption ruled and Jonathan paid for this for 25 years.

Bravo to Kim Anklin and Bob Rahn, who did real and in-depth investigation and got the statement from the honest witness. They also got a confession from the real shooter.  They pushed these facts through the D.A.’s special ‘Conviction Integrity Unit.’  Kim and Bob, with the support of this special division, concluded after months of delays, political drama and nail-biting that the case was horribly flawed and Jonathan was an innocent man.

A little over two weeks ago, Jonathan Fleming was finally declared innocent and released from prison.  He was given 10 million dollars since he was robbed of building any career and working.  He was also given a place to stay to help him transition into freedom again.  Finally he was given a much-deserved apology for being falsely accused of murder and sent to prison.  WRONG – WRONG – WRONG.  I lied.   That is what should have happened if there was any justice left in America.  Instead, when I asked how he was treated, Kim and Bob said there was no apology given by anyone who set him up and sent him away.  There was zero money in damages paid by anyone – state, court, prosecution – associated with his false imprisonment.  He wasn’t even given $20 for a cab to help a little after robbing his entire adult life.  Finally, there was no temporary housing offered, yet millions in America get $30-60,000 a year on welfare for doing nothing and illegals get housing at our expense all the time.  Apparently, if you violate a man with faulty police work like Jonathan, essentially rape and destroy his whole life, he doesn’t even get an apology???

Thankfully, his story and release have made the news everywhere, and Kim and Bob said throngs of all kinds of people were throwing support and love at him.  Let us hope after he settles a bit that this support will bring him much opportunity, help and strategy for the rest of his life.  Right now he is staying with relatives, not having any place else to go. My big hope, and I think they will go in this direction as things roll…IS THAT JONATHAN FLEMING SUES THE PROSECUTORS, STATE AND THOSE WHO IN THE MOST EVIL FASHION SET HIM UP AND PUT HIM AWAY FOR 25 YEARS.  NOT EVEN AN APOLOGY?

Falsely Accused Jonathan Fleming Gets Out of Prison after 25 Years – Now What? added on Thursday, April 24, 2014

3 Responses to "Falsely Accused Jonathan Fleming Gets Out of Prison after 25 Years – Now What?"