“WE STILL HAVE A CONSTITUTION” 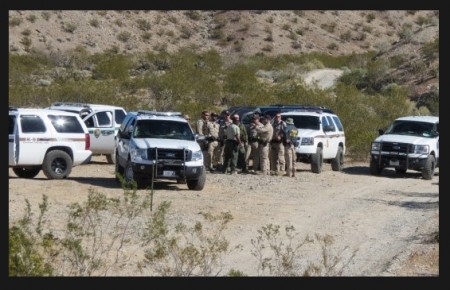 (Apr. 14, 2014) — Many are breathing a sigh of relief since the Bureau of Land Management (BLM) backed down in their attempt to relieve Cliven Bundy of his cattle and generational grazing lands in Clark County, Nevada.  However, the situation exposed a Pandora’s Box of crimes against the Constitution, as well as the will of the American people.  The list below is not meant to be a comprehensive one, but raises points we should all seriously consider:

The Bureau of Land Management (BLM) set up a First Amendment Area. Perhaps someone should tell the BLM that the entire United States is a First Amendment Area – every square inch, including the 600 acres in Clark County, Nevada. The BLM usurped the law enforcement responsibilities normally saved for the States. Constitutionally, the highest law enforcement agent in the area should be the county sheriff, who is accountable to the voters directly. Additionally, the Federal Land Policy and Management Act (FLPMA), adopted in 1976, stipulated that the BLM had to go through the county sheriff for any action that required law enforcement*.

This begs the question:  do you know where your county sheriff would stand in such a situation?  If not, perhaps you better find out.

Congress never gave the BLM this type of law enforcement authority*. It is reported that the BLM now controls over 60% of all the land within Idaho; over 70% of all land in Utah, and over 76% of all land in Nevada*.

The only crimes assigned to the federal government in the Constitution for law enforcement purposes are: Treason, Piracy, Counterfeiting, and International law violations. Therefore, this power grab is also a violation of the Tenth Amendment, which assigns all other rights to the states*.

*Many thanks to Pastor Chuck Baldwin for drawing attention to these facts.  Pastor Baldwin is not only a man of God but he is a constitutional scholar who was also the Constitution Party’s presidential candidate in 2008.

Putting the serious crimes against our Constitution aside, there are a number of other valid questions that should be raised.  For instance, why don’t the feds use this manpower that they garnered to use against our own citizens against those who enter our country illegally at our borders?  This is a hypocrisy that can’t be ignored.  Our borders are being continually violated by illegal trespassers, and our border agents are encumbered with Rules of Engagement that fall significantly short of the Rules of Engagement that the agents employed in the Bundy standoff. Does our government consider our own hard-working citizens to be more dangerous than those entering our borders illegally – especially those who are rumored to be drug lords and Al Qaeda operatives?  Perhaps if you’re enemies of the state holding high-ranking positions within our own government, this point of view makes sense.

And, more frightening:  why were so many of these American agents willing to point firearms at our own citizens? And…who in the chain of command issued the orders to these agents to take such a militant stand against our own citizens; where did these agents come from; who trained them; and to what division of the military or law enforcement do they belong?

The stats that Pastor Baldwin reported regarding the percentages of land owned by the BLM in Idaho, Utah and Nevada are staggering. These stats are also especially troubling because they appear to be a clear indication that U.N. Agenda 21 is achieving its goals. For those who are not familiar with this United Nations plan to grab our land and herd us into Pack ‘em and Stack ‘em urban environments, go to “Agenda 21 for Dummies,” readily available on YouTube.  All in the harmless-sounding name of sustainability, the Bundy family and others like them all across this nation, beware: the government is searching for ways through Agenda 21 and associated programs to confiscate your land.  For us humans, “sustainability” is more than the intelligent preservation of wildlife and the environment; it is a nice-sounding way to strip Americans of their property rights and give them over to a global governing system.  The Bundys’ and their neighbors’ First Amendment rights may have been violated, but for those in Idaho, in Utah, and in Nevada who already lost their land through over-regulation, preservation of some species of animal, or whatever clever device the government created to disguise their power grabs, more than their First Amendment rights were violated.  Their God-given right to the pursuit of happiness vanished along with their property – without so much as a whimper from the rest of us.

Additionally, many reports have been surfacing regarding Senator Reid’s family’s interest in this land.  Can it be that these opportunists have discovered how to use the regulations imposed by Agenda 21 for their own profit?  One of the best things that may come of out this atrocity is an investigation into the elitist Majority Leader of the Senate’s land power grabs and his “alleged” China connections.  This is, perhaps, one of the best arguments for recalling a U.S. Senator that I have heard in a while. People of Nevada, on behalf of the rest of the nation, please pick up that baton! They say every dog has its day.  Hopefully we soon will hear the Reid family barking at the moon as its day is fast approaching.

The battle for the Bundy family may be over soon (at least that’s what we’re being told), but for the rest of us, it may just be the beginning.  I pray that the support that freedom-loving Americans expressed during this debacle is a good sign – a sign that Americans have had enough of government power grabs and that we are just not going to take it anymore. If anything good has come out of this debacle, perhaps it’s the message all patriots just sent to our government:

We still have a Constitution, and even though those in government may not honor it, We the People fully intend to do just that.  God bless the militia, and thank God we still have the First and Second Amendments!

One Response to "Bundy v. the BLM: Is It Over?"