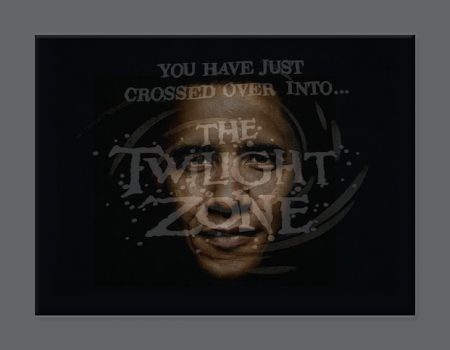 (Dec. 9, 2013) — Can this really be happening?  Is it possible these past five years are just a frightful dream from which we may awaken as those poor souls living in the Twilight Zone never did?

As Judges, journalists, justices, talk show hosts and politicians are handed proof, indisputable evidence, that crimes have been committed, those bringing the charges, providing the documentation, are looked at with glassy eyes and vacant expressions as if they dwell in separate dimensions of space and time.

These past five years have been confounding and bewildering as our country has moved from a firm order of laws, justice and morality, where our leaders were held to high standards, even if only perceived, of honesty, integrity and love of country, attributes which were based upon decades of experience and an unobscured past.

Now, in this surreal, almost mystical opaqueness, a new reality has taken hold as that frightful dream has become a living nightmare.  How in God’s name could this country have allowed this to happen?  How could responsible people from both parties, educated journalists and historians, not just permit this, but to have actively worked for it?

Forget for a moment that the media and others in informative positions of power failed to heed the warning signs and failed to properly vet or ask important questions prior to the 2008 Presidential Election.

Here are some facts that many knew and most hid prior to the 2008 election:

The results of the four dreadful years which followed were ignored, and the usurper was reelected in 2012.

Here are only some of the facts and deeds which occurred during his first four years which the media and both political parties continued to hide.  This in no way is a conclusive list but in deference to our readers we just could not take the time or space to list them all:

In the aftermath of his re-election, even more revelations of dishonesty, lying and dirty tricks have begun to ooze out of the infected boil known as the Obama Legacy.  Not as a result of the media, which still is doing its best to cover for him, but by his own words, his own lies and his own dishonesty which can no longer be hidden from the people as they begin to experience the effects of this new reality.  Even the slowest among us can’t continue to believe it is not Obama’s fault.  We pray this new awareness, of just who and what Obama is and intends to do, has not come too late.

There can be no doubt, many of us have long been saying, the incubus course of the Obama policies has proven to be intentional. If those who are in position to detect and then inform continue to adumbrate the true and intentional stratagem of the Divider-in-Chief, our Twilight Zone will surely be transformed to a miserable reality.

Author’s Note:  It is understood that many of the items listed here are well known to most of our readers.  Though it may seem redundant to list them again, TPATH believes they can’t be spoken of too often.

This article can be printed out, as a quick reference, for those who may ask you what it is you don’t like about Obama.  Except that he’s black.

3 Responses to "Living in the “Twilight Zone”"