The Eye of the Universe Isn’t Watching

MAN’S SURVIVAL IS HIS OWN RESPONSIBILITY 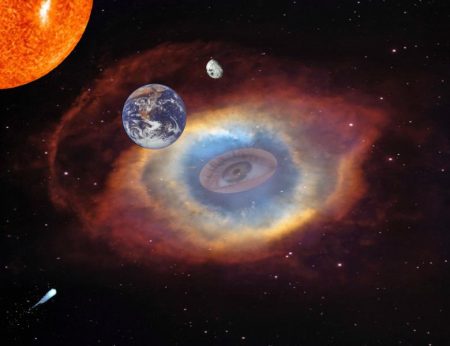 In the grand scheme of things, man is but a very young and successful species on the third planet from a common star, in a garden-variety galaxy among billions of similar galaxies, in a Universe, the dimensions of which are not yet fully known. It is preordained that one day, we as a species will simply disappear.  Earth will be but a burned-out cinder as the Sun writhes in the death throes of its Red Giant phase on its way to becoming a White Dwarf.  The Universe won’t even take notice of the event, as the death struggle of stars like our Sun is a common occurrence throughout the trillions upon trillions of suns and the billions of galaxies that are known to inhabit what is visible to our eyes and our instruments.  The question is, will man hasten his demise by his own hand, long before we reach the Red Giant phase of our dying Sun, some 3 to 4 Billion years from now?  It remains to be seen if man can continue his “successful species” status.   But no matter what we do to ourselves, the Universe won’t shed a single tear.

If one were to project man’s current path into the future, “successful species” may turn into apocryphal extinction.  Irrespective of what Mother Nature can do to us in an instant, man’s only hope of long-term survival is the overwhelming expression of the great goodness that lies within all of us.  That goodness in man overrides the evil within him best when he lives under the umbrella of freedom.  That goodness will be the single most important tool in meeting the challenges we face, both foreign and domestic.

Only one country on Earth has shown the best in man and what can be accomplished under the combination of inalienable freedom and our God-given goodness.  If we lose that freedom and the goodness that flourishes under it, we shall surely descend into the abyss of the evil within us, where greed and avarice are the rule rather than the exception.  We are dangerously close.

Some ordinary men, with vision and the wisdom of age and experience in a time of turmoil and confusion, gathered together on the distant shores of a new land and laid down a ‘blueprint’ for free men and women with common purpose and resolve to live out their lives and govern their individual and collective affairs by adhering to that ‘blueprint’.  The guidance of that ‘blueprint’, through 160 years of significant change, allowed a free society to pioneer, grow and prosper into the strongest nation in all of recorded human history. In the early 1930’s, a much-heralded shift in the ‘blueprint’ was made by a not-so-wise group of people, responding to the perceived national threat of the Great Depression, forever altering that “blueprint’ to such an extent it would have filled the hearts and minds of its founders with loathing and disgust.  The alteration was deceptively simple. Just pervert the phrase in the U.S. Constitution where it states ‘…….. and promote the general welfare’. And promote they did.  As anyone with any vision at all can see, their promotion has brought them decades of immense power and signaled the beginnings of a drastic erosion of our individual freedoms and liberty.  We have been warned on numerous occasions, not only by our Founding Fathers, but by so many more since then who realized the danger of a government abusing its powers and spinning out of control.  Senator Benjamin H. Hill, in March of 1887 (120 plus years ago), delivered one such warning when he addressed the U. S. Senate with these words:

“I have said I do not dread industrial corporations as instruments of power to destroy this country, because there are a thousand agencies which can regulate, restrain and control them; but there is a corporation we may all dread.  That corporation is the federal government.  From the aggressions of this corporation, there can be no safety, if it is allowed to go beyond the well-defined limits of its powers. I dread nothing so much as the exercise of un-granted and doubtful powers by the government. It is, in my opinion, the danger of dangers to the future of this country. Let us be sure to keep it always within its limits.  If this great, ambitious, ever growing corporation becomes oppressive, who shall check it? If it becomes too wayward, who shall control it?  If it becomes unjust, who shall trust it?”

I am but a humble writer who believes deeply in freedom and liberty ….. a freedom and liberty for the individual.  An individual freedom and liberty that is natural, as comes from nature, not from governments, a freedom and liberty that was envisioned by our Founding Fathers and codified into the law of man through our Declaration of Independence and our Constitution.  I believe that when governments or groups of people attempt to stifle freedom and liberty, or remove man from them, man’s progress through time is depressed and he retreats further backwards into depravity, immorality and serfdom.  I believe that freedom and liberty are our strengths, not our weakness, and if we inhibit freedom by any means, we as a people become weaker.  If we as a people become weaker, we lose our creative ability, our ingenuity, our industriousness, our productivity, our can-do spirit, our pride in our accomplishments, our strength and courage to right a wrong when we see it.  We lose our generosity, and finally, we lose our great goodness.  I believe that if the people look to government to solve their problems and acquiesce to its unauthorized power, they abdicate their duty and responsibility to control their own lives and hand it over to a collective.  Having done so, they are no longer free men.  And further, their actions encourage the government to usurp even greater power.

But any government, even ours, no matter how all-encompassing its constitutional safeguards for individual rights, will eventually, on the guise of making a more perfect society or protecting us from ourselves, exert more and more control over the individual lives of its citizens if those same citizens abdicate their right and duty to hold their government to within its constitutional limits.  The increasing and pervasive nature of that control will arrive slowly, bit by bit, so that it is hardly noticeable.  Each succeeding generation will succumb to wider and deeper restrictions on their freedoms and will lack the capacity or the will to resist in any meaningful way.

Perhaps the “Eye of the Universe” may not be watching what happens on planet Earth, but we know who is.  The rest of the world, whether they admit it or not, is looking at America to fulfill its promise of freedom, liberty and goodness and show the way for all other peoples that our 230-plus-year experiment in freedom is still alive and well and is the light and the beacon for all others to follow.  They may say they hate us, but what they really mean is they envy us and would like to be like us or have what we have.  Other nationalities are trying desperately to come here.  Very few are trying to leave.  Unfortunately, the culture of most countries is so ingrained in tribalism or socialism that they cannot fathom ever reaching or touching where we have been and where we can still go.  We can show them the way, unless we lose our heads and our goodness.

Daniel Webster admonished us 230 years ago with: “Miracles do not cluster.  Hold on to the Constitution of the United States of America and the Republic for which it stands — what has happened once in six thousand years may never happen again.  Hold on to your Constitution, for if the American Constitution shall fail there will be anarchy throughout the world.”

You may not realize just how important are these words we write.  What America does will determine the fate of the world.  If we forsake freedom, if we sell our sovereignty for expediency or a few pieces of silver, if we break the bonds of our Constitution, if we abdicate our right and duty to defend freedom for ourselves and future generations, we shall descend into the mediocrity, apathy and self-loathing under which the rest of the world operates and will be pulled down to their level, never to rise again.

The few of us who truly care about America and freedom cannot hold up its flag by ourselves.  All of us who write about what is happening to our country are the crescendo of change in America.  We are being heard and we are changing minds ….. slowly.  If the pens and voices of a thousand conservative writers go silent, who will be the vanguards of freedom?  Who will fill the gap?  If you do not help us and those who defend freedom, we shall do as the Greek god Atlas did, when the world became too heavy.  He just shrugged and threw the Earth into the void.  We shall surely “shrug” if so few understand the gravity of our words, or if they do understand, lack the courage to join with us in the defense of freedom and goodness.

In the end, the Universe will take no notice.  The Universe contains the seeds of intelligent life, but it doesn’t provide instructions on how that intelligent life will or should behave.  It’s all up to us to get it right.  But getting it right remains to be seen, if we have lost our courage to remain free ….. at any cost.

History has laid out for us the process from freedom to tyranny.  First comes a slow rise in tyranny.  Second comes the knowledge of tyranny.  Third comes the resistance to tyranny.  If resistance to tyranny does not result in the return to freedom, then comes violence against tyranny.  This process has played out so many times in man’s rise from the jungle that it is getting very old.  Unfortunately, in 6,000 years of civilization, we have lost what it takes to survive in the jungle ….. knowledge and raw courage.  The Universe doesn’t care one whit that we refuse to gain knowledge, or have lost our raw courage.

There is a wealth of information on both of these sites for those truly interested in and willing to defend freedom against tyranny, whether urban or rural.

————————————-
Ron Ewart, a nationally known author and speaker on freedom and property issues and author of his weekly column, “In Defense of Rural America,” is the President of the National Association of Rural Landowners (NARLO) (http://www.narlo.org), a non-profit corporation headquartered in Washington State and dedicated to restoring, maintaining and defending property rights for urban and rural landowners. Mr. Ewart is now engaged in a plan to expose the Internal Revenue Service with his website (http://www.attackwatchspies.com).  He can be reached for comment at ron@narlo.org, or by phone at 1 800 682-7848.

The Eye of the Universe Isn’t Watching added on Sunday, November 10, 2013