“HE NEEDS TO BE BEHIND BARS!”

(Oct. 13, 2013) — U-Stream is continuing its live coverage of the Million Vets March, which began at the World War II Memorial, moved to the Lincoln Memorial, and is now relocating to the White House.

Some veterans are carrying barricades which had been set up at the memorials to keep out visitors as a result of the partial government shutdown.

The Obama regime had reportedly told federal employees to “make life as difficult as possible” for the public.

A woman spoke on camera about “Agenda 21,” which seeks to install “sustainable development” and strict environmental regulations in U.S. communities through regional commissions.

The camera is showing people of all ages, and a man said, “What a disgrace…that a communist is in that house,” apparently referring to Obama’s occupation of the White House.  The Post & Email has also contended on radio shows that Obama is part of a communist cabal set on “fundamentally transforming the United States of America” into a communist country by the takeover of health care, the auto industry, the banking industry, and by spying on citizens.

At 11:39, the chant of “We the People” went out from the crowd.  “He needs to be behind bars,” one attendee shouted loudly.

Some attendees carried Gadsden flags; others carried American flags.  “We the People!!” went out again at 11:41, increasing in intensity.

At 11:45, U-Stream is showing crowds of people looking at the White House from the street.

The U-Stream narrator said that he visited the Iwo Jima Memorial on Saturday, which also has been closed to the public since the “shutdown.” 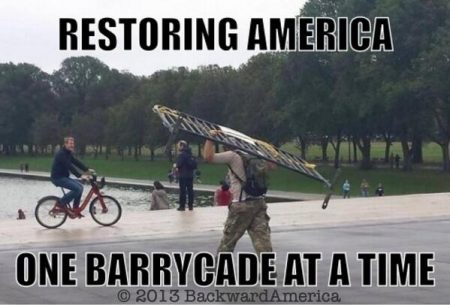 A mainstream print report of the event from CBS News is time-stamped 11:07 a.m.

An angry protester shouted at the White House that Obama “looks like a jack***.”

As a result of the closing of parks and memorials, the Obama White House has been called “The Spite House.”

At 12:05 p.m., Fox News reported that an Honor Flight of World War II veterans arrived today at the memorial which was greeted by a park ranger saying, “Welcome to your memorial.”

Some at the rally are calling for Obama’s impeachment: 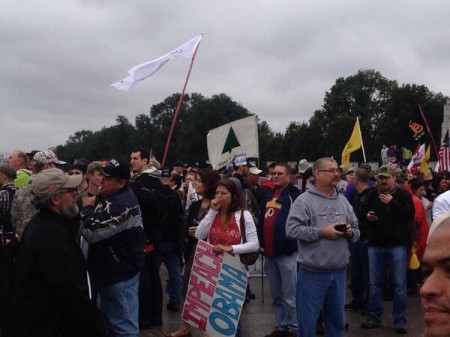 The questions regarding whether or not Obama is eligible to hold the office have never been answered, and the documentation he or others have made public has been found to be fraudulent by a law enforcement investigation.

Several attendees at the Sunday rally stated that there were snipers on the roof of the White House:

The Obama regime has been unfriendly to veterans, having classified them as “potential domestic terrorists” in a leaked April 20o9 Homeland Security report. 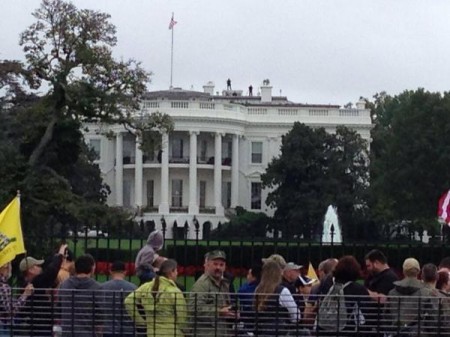 There were snipers on the roof of the Madisonville, TN courthouse on April 20, 2010, along with more than 100 more law enforcers who were not necessary during a brief hearing for Walter Francis Fitzpatrick, III.  A cabal of Obama supporters had placed false threat reports with the Madisonville mayor, with one now working as a “navigator” for the Obamacare program.

2 Responses to "Million Vets March Goes to the White House"