AND “FREE STUFF” FROM THE GOVERNMENT 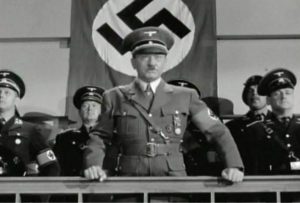 (Nov. 18, 2012) — “The nature of the encroachment upon the American constitution is such, as to grow every day more and more encroaching.  Like a cancer; it eats faster and faster every hour. The revenue creates pensioners, and the pensioners urge for more revenue. The people grow less steady, spirited and virtuous, the seekers more numerous and more corrupt, and every day increases the circles of their dependents and expectants, until virtue, integrity, public spirit, simplicity and frugality become the objects of ridicule and scorn, and vanity, luxury, foppery, selfishness, meanness, and downright venality swallow up the whole of society.”   —  John Adams  1790’s

“Their final objective toward which all their deceit is directed (government) is to capture political power so that, using the power of the state and the power of the market simultaneously, they may keep the common man in eternal subjection.” — Henry A. Wallace, 33rd VP of U.S. (1941)

Did you ever wonder how Hitler was so successful in mesmerizing the German people that eventually led to the deaths of over 50,000,000 people worldwide in World War II?  It was easy.  Times were tough and Hitler promised the common man jobs and free stuff.  The Germans were weak and fell for it.

Did you ever wonder how FDR was so successful in ripping the constitution to shreds and the people idealized him for it?  It was easy.  Times were tough and FDR promised the common man jobs, free stuff and new social rights.  The common man, in his weakness, fell for it.

Now do you wonder how Obama got elected to a second term in office when he defied all the pundits about not being “electable” with the unemployment rate being above 7%?  It was easy.  All Obama had to do was to promise the common man jobs and free stuff and the common man, in his weakness, fell for it.  All Obama had to do was to make out the rich among us as the boogey man, in a classic case of class warfare.  The common man ate it up and couldn’t wait to elevate a one-time, inept community organizer to the most powerful man on the planet for four more years, totally ignoring Obama’s dismal record of his first four years.

The common man is mostly weak and is easy prey for a slick politician who will promise him jobs and free stuff and will set up a straw man to take the heat away from the politician.  Hitler’s straw man was the Jews.  Democrats, since President Wilson, vilify the rich as their straw man and play class warfare to the hilt.  It is a very effective ploy and the common man falls for it every time.

That the common man is gullible is not a new phenomenon.  What is of much greater importance is what happens when the common man is duped by the politician ….. or the soon-to-be dictator, as in Hitler’s case.  Political power becomes centralized and eventually grows to absolute power.  Throughout man’s 5,000-year, tainted, so-called civilized history, this scene is played out over and over again.  The common man never gets it and in the end he is just a pawn or a subject of the wanna-be dictator because he is highly susceptible to being duped by slick politicians.

All would-be dictators start out as advocates for the common man to win them over but in their hearts is the overwhelming ambition to rule OVER the common man.  The Founding Fathers knew this and warned future generations that the constitution would be torn asunder and the common man would become but subjects of a powerful, centralized government, as they have become today in America, not necessarily because politicians are generally corrupt, but more because the common man is so weak.  The reality is, “freedom” is hard.  Dependency is fairly easy.  One wonders if the common man is even strong enough to live free?

But you don’t need guns to subjugate the people.  All you need is millions of laws, rules, restrictions and ordinances and a healthy public treasury from which you can buy votes.  And speaking of regulations, in the last 90 days, the Obama Administration has issued over 6,000 new rules out of his cabinet bureaucracy.  The common man knows not of these rules, but the lawyers know and rub their hands together as they plot how to get rich off the taxpayer (the common man) by filing lawsuits over complicated and complex rules that the common man will never understand.  As the laws and rules grow, the cinch is pulled ever tighter around the vulnerable girth of the common man.  Freedom is a far-off mirage that can never be reached as long as the common man seeks free stuff in exchange for liberty.

But centralized power is not the exclusive purview of government.  Perhaps some of our readers watched the recent PBS series entitled: “The Men That Built America.”  Instead of having a powerful, centralized government, five men took over the United States, and although their ruthlessness built America, they exploited the common man to enrich themselves.   The five men were George Westinghouse, Cornelius Vanderbilt, Andrew Carnegie, J. P. Morgan and John D. Rockefeller.  They were fiercely competitive, mostly with each other.  Among them, they literally controlled all of the key engines of commerce (i.e., finance, wall street, transportation, energy and steel).  Each had an insatiable desire to be the best, the richest and to possess unlimited power.  Each wanted to have a monopoly over the industries they built up, and they would use any tactic and strategy they could devise to maintain or grow the monopoly.  When they were threatened by the unions or the government, they put aside their competitiveness and banded together to thwart intervention by outside influences.  They bought a president, William McKinley, and they were the lenders of last resort to the government itself.  Their influence on government was almost total.

Then President Theodore Roosevelt came along and broke up their monopolies and their power over government.  That didn’t stop them, however; it just slowed them down a little.  Their influence was instrumental in bring us the 16th Amendment (1913) that established the Federal Reserve and the Internal Revenue Service (read The Creature from Jekyll Island).

But even the birth of the Industrial Revolution didn’t start the centralization of power in men not connected with government.  As far back as the Medici family of Italy and the Fuggers of Germany (1400’s) [both very wealthy private merchant families], power was centralized in private bankers who loaned money to governments ….. governments that spent more than their revenue from taxes.

The history of banking families would fill volumes, and the descendants of those very same men now occupy power in the central banks of Europe and the U. S.  (i.e., the Rothschilds, Morgans, Rockefellers, etc.)  These powerful men who loan money to governments greatly influence public policy in order to protect those loans.  The history of private lenders loaning money to governments is littered with intrigue, deceit, adultery, corruption and yes, even murder and blood.  It is not much different today.

The only thing that stops the deadly centralization of power of arrogant men or governments is the people.  If the common man does not respect freedom and the cost that it takes to maintain it, then they must resign themselves to being pawns and subjects of ever-more-powerful men and governments.  History has shown, as it repeats itself over and over again, that when powerful men or powerful governments try to totally dominate the masses, violent revolution follows.  The bankers win again by funding governments that buy material and munitions for war to fend off their enemies.

Throughout history, the masses have caved to the power of dictators.  In the previous century they caved into Mao, Mussolini, Hitler, Stalin, Lenin, Hussein, Mubarek, Gaddifi and some lesser despots.  In our distant past, the masses caved into Attila, Genghis Khan, Alexander and all the other brutal tyrants of history.  Millions died needlessly.  Because of the human weakness of the masses (the common man), they have given in to Obama and whoever follows Obama and the deadly path he and/or they pursue on their way to absolute power.

The Founding Fathers tried their best to see that centralized power did not occur in America by inserting the Separation of Powers doctrine into the Constitution (three branches of government) and giving the balance of political power to the states and the people in the 9th and 10th Amendments.   They limited the power of the federal government to 17 enumerated powers.  Even that wasn’t enough to stop corrupt men and women from breaking those limits to a point at which there are now no limits to the power of the federal government.  (i.e. U.S. Supreme Court sanctioned Obama Care that was blatantly unconstitutional)  The masses, once again, have succumbed to the siren call of “free stuff” in exchange for their vote.  In essence, they sold their freedom for a few pieces of silver.

“The Parallax Prophecies” predicts that as the number of weak common men expands in America, and it is expanding“…..The [masses] will grow less steady, spirited and virtuous, the seekers more numerous and more corrupt, and every day increases the circles of their dependents and expectants, until virtue, integrity, public spirit, simplicity and frugality become the objects of ridicule and scorn, and vanity, luxury, foppery, selfishness, meanness, and downright venality swallow up the whole of society.” — John Adams

In the end, deadly, centralized power will wrap the masses in chains.  How far are we from the time when the lock snaps shut on the chains and the key is thrown away?  Not far!  Unfortunately, reality and history tell us that the only way to break the chains of mass slavery is revolution.  There is still time to avoid revolution, but time is running out.  Without a peaceful, nationwide, organized and coordinated effort by millions of Americans to thwart and unravel an arrogant and runaway government at every level, revolution or civil war will become the only viable alternative left to free men and women.  To be effective, this peaceful effort must occur under a single, nationwide banner or symbol that all can gather around.  Otherwise, the deadly consequences of centralized power will be realized to its fullest in America, and it will occur because of the inherent weakness of the common man who would willingly give up his freedom in exchange for a false sense of security, free stuff that isn’t free…..and his vote for those who provide them.

The Deadly Consequences of Centralized Power! added on Sunday, November 18, 2012

One Response to "The Deadly Consequences of Centralized Power!"