DO FORGERY AND FRAUD RISE TO THE LEVEL OF TREASON?

58:50 into the video- CBS* (female reporter): Sheriff Joe, we have seen just proven, beyond any reasonable doubt, that the Obama Administration has posted an obviously forged Certificate of Live Birth, and has attested to a blatantly forged Selective Service Registration Draft card – a gross violation of Mispersonization of Identity laws – so we must conclude that he is, quote, “living a lie” (i.e. an Imposter).

*see the CBS TV Channel 5 Phoenix 5 minute report on 1 March, 2012 below (viewed over 360,000 times in the last 6 days. And the media says the people aren’t interested in the (in)eligibility issue. Yeah. Right.)

1:00:01 into the video (male reporter): In light of the findings of the Cold Case Posse presented here, is it not reasonable for all Americans to conclude that Mr. Soetoro/Obama, having used forged and fraudulent documents to represent himself as eligible for the Office of President, is proceeding in the commission of a crime – the crime of conspiring to contravene the Constitution, and criminal usurpation of the Office of POTUS?

1:05:30 into the video (male reporter): If we analyze this correctly, we must say that if:

A.  Barack Obama stood up and said that this (blatantly forged document) is my (certified Hawaiian) Birth Certificate, and;

B. The White House put it up (on their official Executive Branch) website;

then we must conclude that:

C. The President lied, and the White House is engaged in a Conspiracy – since he swore that ‘this is my Birth Certificate’!

1:16 into the video (male reporter):  “None of us is stupid in this room.” (yes, he actually said exactly that, then proceeded to say, in effect): We must conclude that since Obama has had his Birth Certificate and his Selective Service Draft Card forged – this is FRAUD (and the People have therefore been defrauded of their Constitutional right to a Constitutionally eligible person in the Office of President). 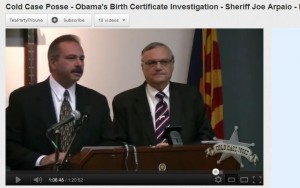 Mr. Tim Selaty, Sr. (TLSWebSolutions.com), a credentialed member of the press, was invited by Sheriff Joe to sit in the front row and record the entire Press Conference with his high-tech video recording equipment so as to catch all the detail of this monumental event. The entire 1:20:52 of the Conference can be seen here:

And for those of you who would like to paste a Scarlet Letter “T” for Traitor in a letter to (or on the forehead of an image of) your own elected Congress-member when you contact them concerning their obvious complicity in the cover-up of the Treason of the Centuries, here is an image of a Scarlet Letter ‘T’:

Attached is the full transcript of the Press Conference (without the questions and conclusions by the Media – you should listen for yourself starting at ~ 58 minutes). Since the Media, the Judiciary, and your elected representatives have shown a traitorous disregard for addressing this Constitutional crisis, you may want to take these transcripts and links to the videos to your elected Sheriff, with a demand for action, as s/he is apparently the last line of defense in restoring your Constitutional right to a natural born Citizen – of good moral character (not ‘living a lie’, in the words of one reporter) – in the Office of President and Commander in Chief.

P.S. At 58:00 minutes, Chief Investigator Mike Zullo states that they have a sworn affidavit from a retired government employee, who said that (in 1979 or 80), he talked to Mr. Obama when the mother of Bill Ayers, at his home in IL, introduced Mr. Obama as a foreign student who they were assisting in getting education for him in the U.S.  (It begs the question: How can he be a natural born U.S. Citizen, and also a ‘foreign student’?  This calls for a Constitution-supporting Sheriff to report this to. You can find one here at www.CSPOA.org.)