HOW MANY “CONSERVATIVE” LUMINARIES WILL SEE THE LIGHT? 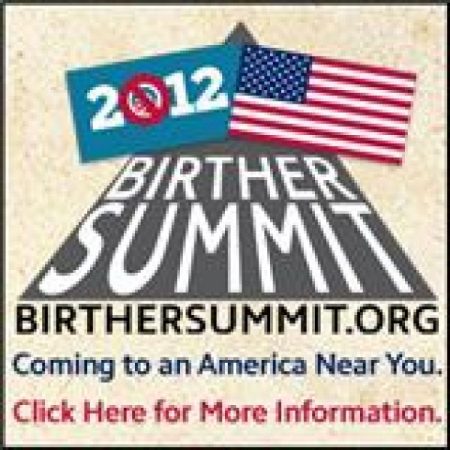 Our Team Encountered Both Encouragement and Willful Blindness

Listen to the Values Voter Summit Wrap-Up on TLAF Radio

At the Values Voter Summit in Washington, DC this past week, The Birther Summit’s presence was unmistakeable, as our energetic, highly informed team spoke and shared literature with many of the attendees and exhibitors. CDR Charles Kerchner (Ret), CPT Pamela Barnett (Ret), Erik Rush, Theresa Cao, and Dean Haskins spent most of their time at the event engaging Christian Conservatives in forthright conversations detailing the facts behind Barack Obama’s constitutional ineligibility to be president, and his accompanying crimes. During the event, the team was able to spend some time with Terry Lakin, who received many sentiments of heartfelt gratitude from attendees.

As reported here, we were able to make some brief initial contacts with Gary Bauer, Michele Bachmann, and Rick Santorum, but most of our time was spent speaking with attendees and exhibitors. Our message was widely supported by the vast majority of folks with whom we spoke, but we did encounter the occasional individual who was purposely ignorant of the truth. Surprisingly, those conversations were not typically with attendees, but with exhibitors. Terry Lakin expressed his extreme disappointment in the fact that the organizations that were represented highly publicize themselves as conservative and staunch supporters of the Constitution, but are ignoring the most critical constitutional issue of our time.

Two of the spokespeople for exhibitors (we are presently not identifying the organizations, as we will contact their leadership for clarification) were blatantly misinformed, which, in and of itself, would have only been unfortunate; however, they were both belligerently arrogant about the fallacies to which they clung, and willfully defiant against even hearing the truth. We believe the organizations they represent should be informed that they have spokespeople who are so sadly misinformed about the Constitution.

At one point, the Huffington Post did a pretty lengthy video interview of CDR Kerchner, but we have yet to see it posted.

After Herman Cain spoke Friday afternoon, a massive line formed for his book signing, and CDR Kerchner was at the head of it. He recounted that, during his brief conversation with Mr. Cain, he felt Cain was the only candidate that truly engaged him, and looked him directly in the eye, rather than through him or around him, as the others largely had done. As Cain was signing his book, CDR Kerchner was able to hand him some of our literature, and he assured CDR Kerchner that he would read it.

The Birther Summit housed some of our team in the Omni Hotel where the event took place, and some in the Marriott Hotel directly across the street, so we were able to engage people in conversation in both locations. Friday evening, we had the opportunity to have an enjoyable chat with Star Parker at the Omni.

We also spent the entire day Saturday in conversations and handing out our literature. There was a very humorous moment that occurred right after we had run into Newt Gingrich walking down the hallway. We shook hands with him, and then started discussing some things amongst ourselves. During our conversation, we heard the inimitable Theresa Cao trying to speak to somebody, and realized that Michele Bachmann had met up with Gingrich, and they were both (literally) running away from Theresa, who was asking them why they weren’t standing up for Article II, Section 1 of the Constitution. They eventually lost her by weaving through the crowd.

That evening, we attended the Faith, Family, and Freedom Gala Dinner, which included several poignant tributes to former Attorney General Edwin Meese. During the dinner, CPT Barnett had a packet of literature ready to go, and was able to put it into Mark Levin’s hand.  She introduced herself as a fan of his show and a retired Army captain, and said that she thought he should consider the information she had just handed him.  She then asked if he had ever reviewed the Supreme Court case Minor v. Happersett, and he returned a blank stare, but said that he would have his people look into it.

After the dinner, I headed to the lobby and, once there, was speaking with Theresa Cao while we waited for the others from our team. As we were talking, I happened to notice somebody who looked familiar walking toward the door, and realized it was Mark Levin, and he was walking alone. I stepped quickly toward the door and met him there. I handed him my card, and explained that I wanted to schedule a “serious discussion with him—not an adversarial conversation, but a serious discussion,” to which he replied, “We’ll see . . . God bless you.” I told him that I respect him, and that I was truly hopeful he would have that discussion.

By the time I got back to Theresa, Terry Lakin was also there, so we chatted for a bit, and then I asked if anyone knew what had happened to CDR Kerchner and CPT Barnett, and about that time, they walked around the corner. Unbeknownst to us, they had gotten an opportunity to speak with Phyllis Shlafly and Brent Bozell, and ultimately, CDR Kerchner had gotten to speak with Ed Meese. He described his military service to him, then handed him some literature, and asked if he would read through it and send him a note or an email with his thoughts about it. Meese assured him that he would send him his opinion.

All in all, we believe the event was very successful for us, as we were able to let many supporters hear of our continued efforts in seeking justice for our country through this constitutional calamity being resolved, as well as provide some essential education for others who were not fully aware of some of the evidence against the current criminal in the White House. In the coming days, we will be following up with many of the contacts we made, and scheduling the next event at which The Birther Summit will be represented.

One Response to "Wrap-Up Report From the Values Voter Summit"