“A TRANSITION TO GREATNESS” 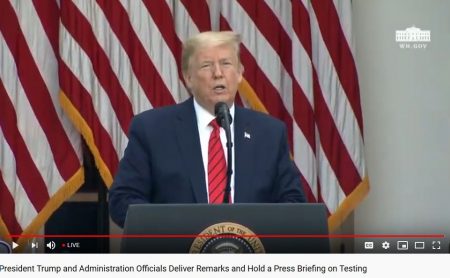 (May 11, 2020) — At approximately 4:15 p.m. EDT, President Trump provided an update to the nation on the progress of coronavirus testing.

He said current testing levels are at approximately 300,000 daily and that $11 billion from the federal government is to go to “states, territories and tribes” to enhance current testing capabilities.

The White House Coronavirus Task Force has not given a formal update for approximately two weeks, a departure from the daily briefings of late March and most of April.

FEMA will be distributing 12.9 million swabs necessary for testing, Trump said, which will enable states to “test more people per capita” than any other country.

“Hundreds and hundreds more locations” for testing will open in the near future at various retailing establishments, Trump said, particularly to serve disadvantaged communities.

He reported that millions of gloves, medical gowns, face shields and other equipment are now being made in the United States.

Germany and the U.S. lead in “lives saved per one hundred thousand,” Trump reported.  He spoke of “achieving a total victory” over the virus, which he said should never have come to America’s shores in the first place.

“We will defeat this horrible enemy…” he said, “and “transition into greatness.”  He predicted that in the third quarter of 2020, “we’re going to do well” and that the fourth quarter will improve over that.  He spoke of a “tremendous spirit” around the world to defeat the virus.

Giroir credited FDA Commissioner Dr. Stephen Hahn for speeding the approval of coronavirus tests, which now number 79, he reported.  All but one are “nucleic acid” tests, while the last is an “antigen-based test.”  Giroir said the latter is “less complex” than the former.  He said that 9 million point-of-care tests will soon be available every month.

He said that the availability of new forms of tests has allowed for increased testing and less use of personal protective equipment (PPE).

“None of this happens by accident” he said of his colleagues on the Task Force, who he said have been working around the clock for weeks.

Giroir then brought on Brad Smith of the Center for Medicare and Medicaid Innovation, who said that his unit has been formulating testing goals for each state.  “There are really three parts to making sure that a test can happen,” he said, involving specimen collection supplies, testing machines and laboratory supplies, and access to testing.  He said that “retailers” have been opening more sites where testing can be done.

At 4:38, Smith concluded his report, at which point Trump suggested he and Giroir remain to take questions.

Fox News’s John Roberts posited that “the system broke down” as a result of two White House aides having recently tested “positive” for coronavirus, to which Trump said he disagreed with the premise and that at least one person had tested “negative” the day before the “positive” test.  “Everybody coming into the president’s office gets tested, and I felt no vulnerability whatsoever,” Trump said.

Jonathan Karl of ABC asked when Americans can expect to be able to be tested each day before going to work, to which Trump said, “Very soon.”

Regarding reopening their economies, Trump said, “we’re leaving it up to the governors.”  “Our country has learned; our country has been incredible,” he said.  “We’ve had a great relationship with governors, Democrat and Republican, and overall I think they’re making very good decisions.”

To the next question, Trump said that “as of today,” the number of U.S. deaths is reported at 80,000.  However, he said the U.S. “has prevailed” in the area of testing.

As for China, where the virus originated, Trump said he is “not happy.”  When asked about a potential “renegotiation” of the trade agreement he consummated with Chinese president Xi late last year, Trump said he has no interest.

He again said he sees “a transition to greatness” as parts of the country reopen for business.