Trump: Michael Cohen “Directly Asked Me for a Pardon” 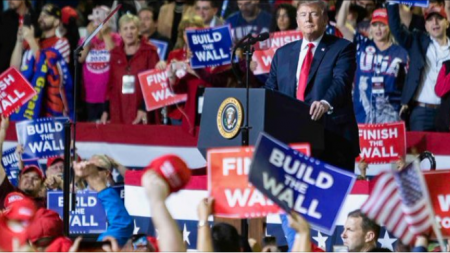 (Mar. 8, 2019) — In a tweet late Friday morning, President Trump commented, more than a week later, on his former personal attorney’s sworn statement to the House Judiciary Committee that he “never” asked for a presidential pardon after he was accused of a number of federal financial crimes last year.

In November, Cohen accepted a “guilty” plea and was sentenced to three years in prison which he will begin serving on May 6.  He also admitted to having lied to Congress when he testified in 2017 that Trump’s efforts to build an edifice in Moscow  concluded in January 2016.  Rather, Cohen later said, negotiations did not cease until June of that year, when the presidential campaign was in full swing.

Cohen, who was associated with the Trump Organization for at least ten years, claimed he initially lied to “protect Mr. Trump.”

Cohen testified to the House Judiciary Committee publicly on February 27 for approximately eight hours, which many Republicans found futile since Cohen admitted to “five counts of tax evasion from 2012 to 2016, one count of making a false statement to a financial institution, one count of willful cause of unlawful corporate contribution and one count of excessive campaign contribution on Oct. 27, 2016,” as reported by The Washington Examiner.

During his sentencing, Cohen also said he made “illegal” payments on behalf of “Individual 1” to two women who claimed they had sexual relations with Trump, with Trump confirmed by Cohen as “Individual 1” in his testimony last week.  Trump denies the women’s claims and said no campaign funds were used to make the payments.

The day before his testimony last week, it was reported that Cohen was disbarred by the New York State Bar Association.  When House Judiciary Committee Chairman Elijah Cummings opened the hearing, he said that he “would not tolerate” dishonesty.

During his February 27 testimony, Judiciary Committee member Mark Meadows (R-NC11) announced he was making a criminal referral as a result of Cohen’s apparent failure to report all “foreign contracts” in his pre-testimony written statement, an effort on which he was joined by ranking committee member Jim Jordan (R-OH4).

Meadows also claimed Cohen made false statements that day as well as failed to register as a foreign agent when he accepted the contracts from a Kazakhstan bank and the pharmaceutical company Novartis.

Trump: Michael Cohen “Directly Asked Me for a Pardon” added on Friday, March 8, 2019