“GIVING CREDIT WHERE CREDIT IS DUE”

(Oct. 23, 2016) — In a July 30, 2016 article prompted by a letter received from Tennessee state inmate Richard A. Mayers, The Post & Email related Mayers’s report of repeated beatings at the hands of correction officers at the West Tennessee State Penitentiary (WTSP), where he was housed at the time he contacted us.

Mayers turned 54 on October 11 and reported that he has been confined to a wheelchair for some time and has special medical needs.  WTSP, colloquially known as “West High,” is known as a highly-dangerous prison, and Mayers claims that some of the correction officers are themselves gang members.

A report by Nashville’s WSMV published last December and updated in June states that “A Channel 4 I-Team investigation uncovered gang members and those affiliated with gang members being hired as cadets to work in the state’s prison system.”  Tennessee Department of Correction (TDOC) spokeswoman Neysa Taylor denied the findings.

Taylor has also labeled all of the reports which The Post & Email has received regarding Tennessee prison conditions, particularly those from the privately-run Trousdale Turner Correctional Center (TTCC) as “inaccurate.”  After forwarding her additional comments from inmates’ relatives a month ago, Taylor provided no response.

While at WTSP, Mayers alleged having been “denied, food. – medicine – soap – toothpaste – toothbrush forced to stay in solitary confinement for over two months with one pair of socks, underware, tee shirt, [sic] but before this unbelievable barbarism, I was beaten bloody, my left eardrum busted, by a racist assistant warden his chief of security and two other members of his gang…”

Following publication of our July 30 article, The Post & Email sent a hard copy not only to Mayers, but also to WTSP Warden Jonathan Lebo. As expected, we received no response from Lebo, but on September 16, we received a letter from Mayers stating that he had been relocated to the Morgan County Correctional Complex (MCCX) in Wartburg.

In a third mailing received on October 14 containing two letters totaling 14 pages, Mayers complimented MCCX Warden Shawn Phillips as well as two members of his staff, one a counselor and the other an instructor, for their “genuine care and a real concern about the recidivism rate of the inmate in TN.” [sic]

Of the counselor, Mayers wrote, “Counselor Seibers has especialy gone above the call of duty by helping me make a couple of legal calls and by personaly siting down in front of a computer and helping me to go over my federal case and makeing me a dozen printouts. This leval of personal help is unheard of in my whole of 30 odd years of doing time, now this is not intended to schmooze, only giveing credit where credit is due.”

“Morgan County is what west high was supposed to be,” Mayers wrote.  “They can handle any leval of inmate from outside trustee to a super max inmate.  They are takeing the responsibility of being a program facility seriously in my humble opinion.”

Mayers additionally reported that, unlike the other Tennessee prisons in which he has been housed, MCCX is unionized and speculated that that factor might account for “the proffessionalism of the CO’s,” as Mayers sees it.

Mr. Mayers believes that the exposure of his treatment at WTSP has offered him a certain level of protection.  However, he stated later in his letter that “My survival is not guaranteed even here. Since I have terribly offended a certain very powerfull street gang, so thank you from the bottom of my heart and I will continue to put my correspondence and writeings and reports to do first and formost as we are both aware of how important transparancy is so as to force change.” 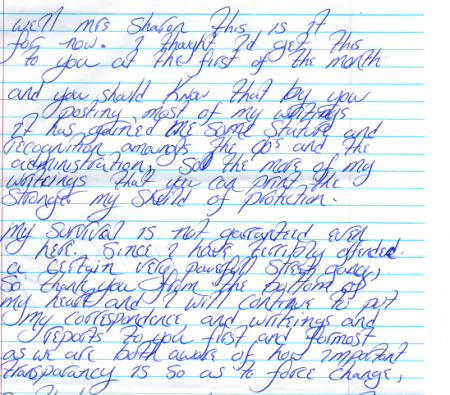 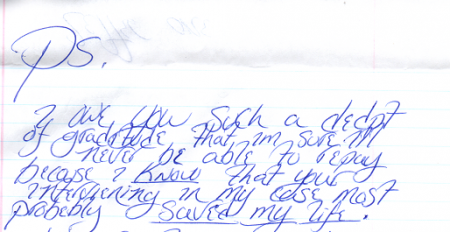