THANK YOU FOR VISITING US MORE THAN 39,000 TIMES IN OUR FIRST MONTH Dear Readers of The Post & Email, I want to thank you for your trust and appreciation shown to The Post & Email by your numerous visits in our first month of publication.  I had aimed for merely 10,000 visitors in the […]

Is Fukino's office in open rout?

DOH DIRECTOR’S OFFICE SHAKEN UP BY CITIZEN’S HUNCH THAT OBAMA HAS ALTERED HIS ORIGINAL VITAL RECORDS by John Charlton (Sept. 30, 2009) — Recent public revelations by Attorney Leo Donofrio, that the office of Dr. Chiyome L. Fukino, the  Director of the Department of Health for the State of Hawaii, has a policy of obstructing […] 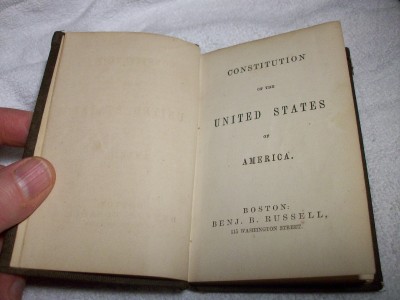 Judge Carter sets dates for trial in Barnett vs. Obama

CIVIL MINUTES OF SEPT. 8th DETAIL ORDER OF HEARINGS by John Charlton (Sept. 26, 2009) — While there has been doubts and discussion on various blogs and internet fora regarding the dates for hearings and the trial, in Captain Pamela Barnett et al. vs. Obama et al., Judge David O. Carter has clearly indicated in […]

Obama has amended his own HI Vital Records

CITIZEN JOURNALIST OUTS HI OFFICIALS IN COVERUP by John Charlton (Sept. 21, 2009) — Attorney Leo Donofrio announced this evening at his blog, that a citizen journalist, who goes by the name TerriK, has, in communication with various Hawaii officials convincing evidence that Barack Hussein Obama’s vital records were altered, ostensibly at his own request […]

Constitutionalist silenced, to appeal to the Supreme Court

BENSON’S “CRIME”: SAYING THE 16TH AMENDMENT WAS NOT PROPERLY RATIFIED by John Charlton (Sept. 21, 2009) — In one of the most outrageous cases of Judicial persecution of an American citizen, exercising his First Amendment rights to publicize the little know history of the ratification of the 16th Amendment, William J. Benson is to appealed his […]

COUNSEL FOR DRAKE AND ROBINSON HAD REBUTTED MOTION FOR LIMITED DISCOVERY by John Charlton (Sept. 21, 2009) — Last week Attorney Gary Kreep, of the United States Justice Foundation, filed his opposition application for a Limited Stay of Discovery in Barnett et al. vs. Obama et al, on behalf of his plaintiffs, Dr. Wiley Drake […]