Fauci: “Mitigation” Measures Having an Impact

HOW MUCH HAVE WE “FLATTENED THE CURVE?” 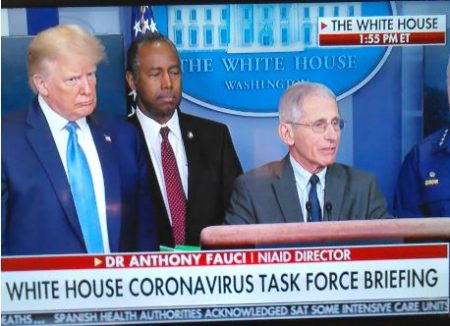 (Mar. 21, 2020) — At Saturday’s White House Coronavirus Task Force presser, NIAID Director Dr. Anthony S. Fauci said the virus “mitigation” efforts undertaken by Americans, particularly in the hard-hit states of New York, California and Washington in the form of social distancing, are having an effect in blunting the surge in positive coronavirus cases.

Fauci said he cannot yet provide an exact assessment of how much the mitigation efforts are reducing the spread of the disease.

As for testing, Fauci said he believes “we are getting there” so that any American who needs the test can get one.  He stressed, however, that asymptomatic individuals have no reason to be tested.

Pence confirmed news reports that someone working in his office tested “positive” and that Pence and his wife will as a result undergo tests for coronavirus.  The individual did not come into direct contact with the president or with him, Pence said.

He reported that the nation is in “Day 6” of Trump’s 15-day plan to “flatten the curve” representing the anticipated sharp increase in confirmed cases as additional testing takes place. The 15-day plan was also touted by Fauci on Friday and Saturday.

HUD Secretary Dr. Ben Carson reiterated previous announcements that evictions and foreclosures initiated by the federal agency will be suspended once a homeowner contacts his or her loan servicer.  Carson did not provide a time frame for the “forbearance” in those processes.  “What we’re trying to do is bridge the gap,” Carson said, “so that we don’t destroy a very excellent system and have to start all over again.”

Following Carson, Trump stepped to the podium to answer questions. To Fox News’s Mark Meredith, Trump said that the administration has “many things” coming to provide relief to Americans who may lose their jobs as a result of local and federal coronavirus mitigation efforts.

Regarding financial relief, Trump said he has “spoken to everybody, directly or indirectly, many, many times,” including Speaker of the House Nancy Pelosi.  “There’s never been a thing like this in the history of the world,” Trump said.  “The biggest thing we can do is get rid of the problem…We had the greatest economy in the history of the world before we had this problem.”  He said the financial packages under consideration will quickly restore the U.S. economy to its former successes.

Addressing another reporter’s question, Fauci said that testing is expected to shift to a model which does not require PPE (personal protective equipment) based on self-testing.

Pence said that anyone with N95 masks can donate them to a local hospital.  “The great news is the American people are doing this now,” he added.

To a journalist who cited physicians reportedly stating they were short of supplies, Trump said that administrations prior to his “didn’t do much” to prepare for the current situation.  “Many doctors that I read can’t believe the great job that we’ve done,” Trump said.

“I was the one that closed the country down,” Trump said to a CNN reporter, referring to his directive to stop incoming air traffic from China in late January.

Later, Fauci acknowledged having received the type of call the reporter described.  “You’re not making it up,” he said to the reporter.

Trump said that “ventilators and respirators” are being produced on a large scale.  As to the use of chloroquine, which has been used to treat malaria for decades, Trump expressed considerable optimism and said we need to “pray to God” that it is effective on the many Americans who are now ill.

At 2:13 p.m., Pence said that a major announcement on medical equipment procurement will be made on Monday.

Trump made his exit from the presser several minutes later, stating that he was going to engage in negotiations regarding relief measures.

“I hope the American people are encouraged,” Pence said at 2:27, by the “whole-of-government approach” employed by the Trump administration.  “Every single American can put into practice the principles” of Trump’s 15-day program, he said, in order to “slow the curve” of the virus.  He concluded the presser two minutes later.

Fauci: “Mitigation” Measures Having an Impact added on Saturday, March 21, 2020

One Response to "Fauci: “Mitigation” Measures Having an Impact"