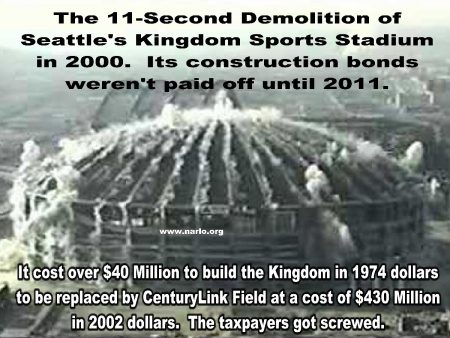 (Feb. 16, 2020) — “The problems we face now – poverty and violence at home, war and destruction abroad – will last as long as we continue relying on the same politicians who created them in the first place.” — Donald Trump

As everyone knows it is much easier to tear something down than it is to build it in the first place. Buildings are demolished in a few seconds with some well-placed explosives at the foundation and certain key points in the structure. It was utterly amazing to watch the almost instantaneous destruction (11 seconds) of Seattle’s Kingdome sports stadium, a concrete structure that was designed to last 1,000 years.

But it takes a little longer to destroy a free country. Nevertheless, the methods are actually quite similar.  All you have to do is to plant a few well-placed “explosives” on the foundation of freedom and blow the guts out of the key points of its internal strength.  There is nothing to it if the people aren’t paying attention and of c,ourse, they aren’t.  They’re too busy or don’t care.

Where to plant the explosives to destroy a free country:

Explosive No. 1       Let the Government get the people to believe they are “victims.”

Explosive No. 2    Let the government get the people to think that Government is their only salvation and solution to their problems.

Explosive No. 5       Use the education system to brainwash our children in socialism, radical environmentalism and the one-world order for several generations.  Fail to teach the history and foundation of our freedom.

Explosive No. 6       Do not forcefully protect our borders against illegal immigration, human smuggling and drug trafficking.  Provide free health care, welfare and other benefits to illegal aliens.  Encourage them to vote in our elections even though it is illegal for a foreign national to vote.

Explosive No. 7       Allow the government to support, advocate for and teach multiple languages.

Explosive No. 8      Undermine the Constitution by codifying environmental protection into law and giving it more priority than our freedom, liberty and property rights.  Force climate change down the throats of the people to make them feel guilty and get them to pay huge taxes to solve a problem that isn’t manmade, the sole purpose being to further control the behavior of the masses.

Explosive No. 9       Heavily tax the people to pay for all the social engineering and environmental protection, then make the tax code so complicated that no one will understand it.

Explosive No. 10     Enter into foreign wars where our intent is not to win, but to try and convert the country in which we are fighting into a democracy.

Explosive No. 11   Enter into hidden executive agreements (trade deals and treaties) with other countries, without congressional approval, or even with congressional approval, that repeal our sovereignty and eat away at our constitutional protections in the quest of a one-world order. (USMCA – the North American Union – TPP, WTO, Iran Nuclear Deal, etc.)

Explosive No. 12     Establish a Federal Reserve and the Internal Revenue Service used to tax the people to pay back the Federal Reserve for its loans to the government.  Make every American a debt servant to the deficit and national debt over which the people have no control.

Explosive No. 14     Let federal, state, or local agencies use the raw power of their agencies to illegally investigate any American citizen or illegally investigate or spy on members of the opposite political party with the sole purpose of discrediting, tearing down, accusing them of crimes they didn’t commit, embarrassing, impugning, libeling, or defaming an individual or members of a political party.

Explosive No. 15     Let powerful men of finance, industry and politics conspire to dissolve the nation’s sovereignty by forcing one-world government upon us.  The following are statements made by powerful men at meetings of the Bilderberg Group and the United Nations in Europe at different times doing just that:

“Today Americans would be outraged if U.N. troops entered Los Angeles to restore order; tomorrow they will be grateful! This is especially true if they were told there was an outside threat from beyond, whether real or promulgated, that threatened our very existence. It is then that all peoples of the world will pledge with world leaders to deliver them from this evil. The one thing every man fears is the unknown. When presented with this scenarios, individual rights will be willingly relinquished for the guarantee of their well being granted to them by their world government.” — Henry Kissinger in an address to the Bilderberg organization meeting at Evian, France, May 21, 1992. Transcribed from a tape recording made by one of the Swiss delegates.

“We are grateful to the Washington Post, the New York Times, Time Magazine and other great publications whose directors have attended our meetings and respected their promises of discretion for almost forty years.” He went on to explain: “It would have been impossible for us to develop our plan for the world if we had been subjected to the lights of publicity during those years. But, the world is more sophisticated and prepared to march towards a world government. The super-national sovereignty of an intellectual elite and world bankers is surely preferable to the national auto-determination practiced in past centuries.” — David Rockefeller speaking at the June 1991 Bilderberger meeting in Baden Baden, Germany (a meeting also attended by then Governor Bill Clinton and Dan Quayle).

“It is the sacred principles enshrined in the UN Charter to which we will henceforth pledge our allegiance.” — George Bush addressing the world leaders at the UN.

Explosive No. 16     The People choosing to ignore the above 15 warning signs of destruction.

As a private pilot we study airplane accidents.  In almost every airplane accident that can be attributed to pilot error, the pilots ignored the initial warning signs that led up to the accident.  It wasn’t just one thing the pilots ignored; it was a series of three or more things.  WE THE PEOPLE are the pilots of the “American Freedom Plane” and we have ignored the warning signs of our own destruction.  We are now on fire and it’s uncertain that we can safely land the plane.  If Americans aren’t scared, they just don’t understand the situation.  There is little time to put the fire out and get the plane on the ground. 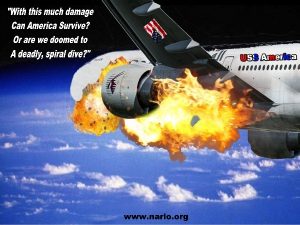 A free country cannot remain free without a foundation of basic principles.  Our Declaration of Independence and the U.S. Constitution contain those principles.  We either defend these principles or we give up our claim to freedom.  NARLO has designed its own set of principles, based on the Constitution. You can find NARLO’s 18 principles HERE.  Our goal and objective is to defend those principles with every ounce of courage and energy we can derive from the strength of American individuals who savor and are willing to fight for freedom.  But we can’t do it ALONE.

“If you won’t hold government accountable, it will do whatever it pleases and it is.”

Remember, your first line of defense against government abuse and intrusion is your property line.  Protect it with our powerful, legally intimidating, constitutional No Trespassing Signs HERE and HERE.

10 Responses to "A 16-Step Program To Destroy America"