ARE THESE PROCESSES CONSTITUTIONAL?

by Fergus Nolan, ©2019, blogging at MemphisTruth.org 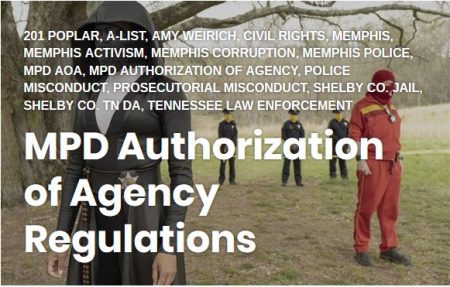 (Dec. 7, 2019) — Authorization of Agency (AoA) is a pair of processes at Memphis Police Department and the DA’s office, which are designed to circumvent provisions in the Tennessee criminal trespass law, TCA § 39-14-405.  AoA is designed to enhance public safety by controlling unwanted citizens who access private business property. 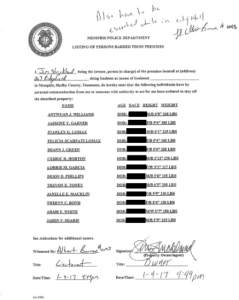 We have written extensively about one AoA process, the MPD’s form AA 0306, which is summarized in the most recent blog.   We provide links to our blogs and other documents at the end of this piece.  We have not previously written about the second process, which is based on signage located mostly in apartment complexes, but we describe the second process here.

We recently discovered, via Open Records Request, the regulatory device used by MPD for AoA.   It is section 52 of the Uniform Patrol Station Standard Operating Procedure, page 35.

We provide the text of the FOIA we received from MPD below, with section headers inserted by us.  It is the Uniform Patrol Station Standard Operating Procedure.

About the AoA SOP.

We see numerous problems with the current implementation of AoA.  As examples, section 1 confines AoA complainants to businesses only, and there were 112 AoAs (6.6%) for residence owners who were private individuals in our 2018 FOIA.

In section 2, the business owner must advise the AoA target, in the presence of an MPD witness, of the imposition of AoA.   There is one alternative procedure provided involving the posting of a notarized affidavit.   We received notification, in response to a FOIA request, that there are no such affidavits on file at MPD.

In Section 3, the business owner and the witnessing officer must sign and complete the AoA form at the local police station.  The combination of sections 2 and 3 require one three-way meeting which must include the AoA target, which can be anywhere but is assumed to be at the alleged trespass location, and a second meeting and filing which must include the complainant and the original witnessing police officer, and must take place at the local MPD precinct.

We have an email from MPD Colonel Worthy, commander of Ridgeway precinct, emphasizing this inflexible procedure.

“Sir, you will have to give the a verbal order to the individual to not be on the property in the presence of an officer. Then we can fill out the form. You have to have the name of the officer and his IBM number. Then the form is to be completed at the station. If the form is completed before that step it is not valid…”

Of the 45 cases we have sampled, this procedure was not followed in a single instance.   We are following up on interviewing additional AoA targeted individuals.