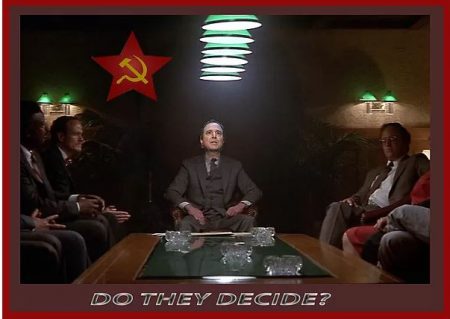 (Nov. 25, 2019) — The consensus, at least among the Demonrats and the corrupt media is that the House of Representatives has the authority to declare the standard for impeachment on anyone they choose and for any reason.  They claim that the Constitution gives them that power. That, my patriotic friends, is not just false, it is dangerous.

The Founding Fathers, if they despised anything more than being ruled by the British Crown, it was being ruled by pure democracy. Therefore, to imagine or surmise that they would hold those beliefs to such an extent as to put their lives and their sacred honor on the line and would then provide absolute power to remove a political opponent by pure means of having a majority, is laughable.

While no one can deny that many Demonrat politicians of today are indeed laughable, it would not portend anything but evil if we allow those diabolical clowns to alter our Constitution.

In support of the fairly obvious idea that our Founders would never allow a pure majority to have supreme power over whom is allowed to sit in the Oval Office, the following is the exact wording of the last paragraph and the only paragraph in ARTICLE I-Section 2 of the Constitution which deals with impeachment.

“The House of Representatives shall chuse their Speaker and other Officers; and shall have the sole Power of Impeachment.”

Does that paragraph give the House the authority to set the standards, declare offenses or define what constitutes impeachable offenses? No, it does not. Those standards are preset in the Constitution and the Senate is the body that will decide if those preset standards have been violated. Even the Senate has no power to include or exclude impeachable offenses. Only the Constitution does.  More on that later.

So then, what does “The House of Representatives shall chuse their Speaker and other Officers; and shall have the sole Power of Impeachment” really mean?

Remember that an impeachment is the political equal of a criminal indictment. In our criminal justice system attorneys general and prosecutors have the authority to indict. The crimes one can be indicted for are not created by the prosecutors. It is their purview to assess whether a set crime has been violated and if so, indict.

Likewise a policeman can arrest a presumed perpetrator based upon laws on the books, not on a subscribed theory of the arresting officer.

Taken to another concept a school principal can expel a student for violations of conduct set forth by the School Board, not by him or her.

These three examples all have the same theme. Those with the power to implement do not have the power to set the parameters. Other bodies and documents do that.

Since the Constitution clearly lays out the actions required for impeachment and gives the Senate the authority to convict or not, the House has no more legal authority than to indict. Period.

Now that we know that the House can only serve as the “arresting” officer or “indicting” prosecutor we need to look at what the Constitution and the Federalist Papers describe as being impeachable.

As I was doing the research on this I was dismayed but not even a little surprised to find out that the left despises the Federalist Papers. A particularly well-known website describes them as “propaganda,” prepared by Hamilton, John Jay and others as a tool to manipulate and scare the public into supporting the Revolution. Just another example of a very sick and deranged media.

It is of no wonder that those writings, which detail in many words and declarations the thinking and the desires of our founders in what they hoped would create as perfect a representative government as was humanly possible. This kind of clarity can never be condoned, accepted or acknowledged by those who fear the people’s rights, as detailed in those papers.

As a side note, there are few nincompoops on the left who believe that Hamilton, writing in Federalist Paper 65, gives the power to the House to expand beyond the parameters set forth by the Constitution because he identifies the impeachment process as political. This is one Federalist Paper they like until someone informs them that Hamilton was only making a distinction between a criminal indictment and a political impeachment. That difference or similarity does not present the House with any special right to invent misdeeds.

Which brings us to breaches of trust and or crimes by an elected official that fall under the Constitutional enshrinement. The well-known phrase “high crimes and misdemeanors” is probably the least understood and most abused phrase found in the the Constitution. Well, maybe “shall not be infringed” could give that statement some competition.

First one has to understand that the Founders never intended for a sitting President to ever be indicted for a criminal offense while seated as President. Not that it was all that complicated but they knew too much power would be put into the hands of federal, state, or local prosecutors giving a few politically or criminally motivated scoundrels the ability to overrule the electorate. Does this sound a bit familiar? That is why they provided the impeachment process and why they really left no ambiguity as to what could get an impeached person found guilty.

Most people, ignorant of the Federalist Papers, consider the term “High Crime” to mean something sinister, such as treason, bribery or abuse of power.  It means none of those things. High crimes, as described by many in the Federalist Papers are “crimes” committed by a person in high position. There is no stipulation as to the value of the crime only that it was committed by a person in high position.

The “misdemeanor” word is also misunderstood by many who believe it has some connection to the misdemeanor crimes on the books today.  When this word was chosen for use by our Founders the misdemeanor law had not been invented or used as it is at present. Today’s misdemeanors are comprised of non felonies such traffic violations or trespassing. That description would set a very low standard for impeachment. Not a good thing.

So as much as the Demonrats in the House of Representatives would love to be able to impeach a conservative President for the misdemeanor of jaywalking, the text of the Constitution contradicts those idiotic ideas.

Impeachment! Anything the House Says it is? added on Monday, November 25, 2019