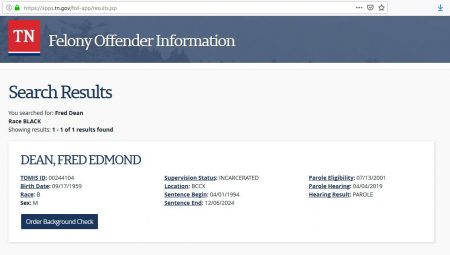 (Jul. 5, 2019) — A letter received on Monday from TDOC inmate Omowale A. Shabazz, #244104, rescinded an earlier request that we not divulge his having been granted parole effective in April 2020.

Shabazz, whose birth name was Fred Edmond Dean, wrote in his June 24, 2019 typewritten letter that he felt his original request for us to keep the information confidential was motivated by “fear,” “the fear of having something taken that I longed for, desired, and which I believed I was entitled to.”

“Yet if I submit to fear now – what is to prevent me from submitting to fear once again when faced with difficult decisions upon release?” Shabazz continued.

In previous letters this year, Shabazz said he was assaulted by correction officers Baggett and Collins at Northwest Correctional Complex (NWCX) in Tiptonville. Approximately two months ago, he was relocated from NWCX to the Bledsoe County Correctional Complex (BCCX) in Pikeville.  His entry in the Tennessee “FOIL” system reflects that he was granted parole at his latest hearing.

Although he legally changed his name while in prison, Shabazz has reported that the TDOC claims to have no record of it. At least one letter was returned to this writer as a result of our having used his new name and neglected to include “Fred Dean” on the envelope.

Shabazz provided court documentation of the name change to The Post & Email in October 2016.

In January, Ahabazz filed a federal civil-rights lawsuit against the TDOC and specific personnel alleging violent treatment, denial of law library access, and fear that he would be subjected to “physical injury.”

Rather than “acting out,” Shabazz said he is now reacting to provocation within the prison environment with “a calm and collected demeanor. I stay respectful even when they (prison officials) become blatantly disrespectful, this is how I win,” he wrote on page 2 of his letter.

We first heard from Shabazz nearly three years ago. In several letters, he wrote that he had been denied parole on a number of occasions, although his record indicates he was eligible in 2001.

Incarcerated when he was 35 and now 60 years old, Shabazz has expressed concern over how he will fare when he is released from his decades-long confinement.

Shabazz is co-author of “Journey to Consciousness: While Behind Bars,” which Amazon reports is currently out-of-print. 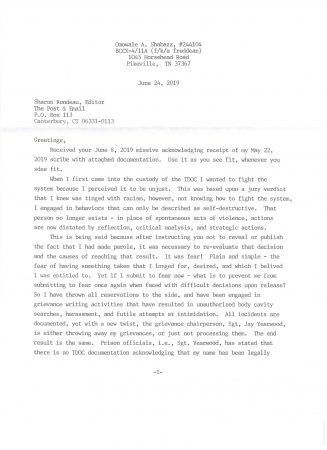 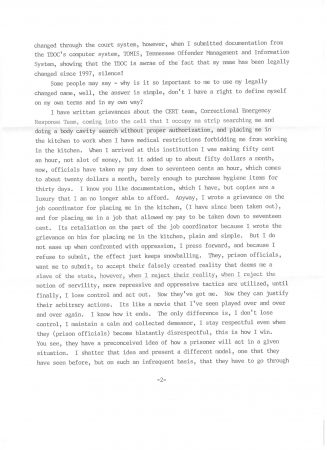 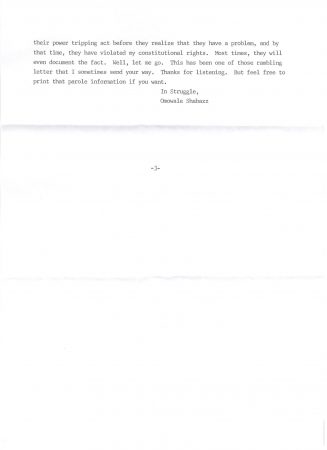