(Jan. 4, 2019) — A letter received Friday from Tennessee Department of Correction (TDOC) inmate Johnny Royston Sr., who is housed at the Trousdale Turner Correctional Center (TTCC) in Hartsville, states that he is experiencing retaliation after informing this reporter last month that he had not received his prescription medications for more than two months.

Royston reported that one medication is for pain, while the other is for a cardiac condition. His TDOC record shows that he is 68 1/2 years old.

The letter states that a “Sgt. Mitchell” plans to place him in “A unit,” an area where Royston said his safety will be at risk. “Sgt. Mitchell want to put me in A builden that would pose A threat to my life Is Sgt. Mitchell commit A major rule infraction her behavior intended to commit conspiracy with doctor for me going over corecivic head for medical helped…” [sic] he wrote in the letter.

Royston claimed that “the doctors and nurses” are coordinating with Sgt. Mitchell his impending move to “A” Building.

“CoreCivic” is the private owner/operator of the prison, which has been reported as fraught with problems since its opening three years ago.  Since early spring that year, a myriad of inmates have described to this publication gangs being permitted to essentially dictate prison operations; inadequate food and medical care; drugs and other contraband entering the facility; inmate deaths; violence against inmates and staff members alike; significant short-staffing; and improper procedures for performing headcounts, the latter reported by the Associated Press in 2016.

“I registered my medical concerns with medical first and got No response…” Royston said, referring to his resorting to contacting the media.

A November 2017 report produced by Tennessee’s Comptroller of the Treasury on the TDOC’s performance faulted TTCC when it cited “inconsistencies regarding hires, terminations, and vacancies for two of the four Core Civic facilities. We found the following reporting issues for Trousdale Turner Correctional Center and Hardeman County Correctional Center: missing position numbers for vacancies; vacancies carrying over to subsequent months without additional vacant days; vacancies listed with more than 30 days not listed for the previous month; different job titles with the same position number; the number of hires and terminations not reconciling to the number of vacancies; and reports missing the number of fill ed positions, inmate population, and officer-to-inmate ratio” (p 4 of report).

According to an undated article in The Hartsville Vidette referencing the years 2017 and 2018, CoreCivic has been fined more than $2.3 million for TTCC’s non-conformance with TDOC policies.

Although perhaps not to the dreaded “A” building, Royston indicated in his letter that he has been relocated since contacting us about the discontinuation of his medications. “I was in DC 127 where I was safe from any threats But they refuse to put me back there…” he wrote. [sic]

As he has in the past, Royston said that contraband, including “guns and knives,” continues to find its way into the prison.  He also asked the question, “Am I allow to be provided A safe humane place free from any threats of assaults”. 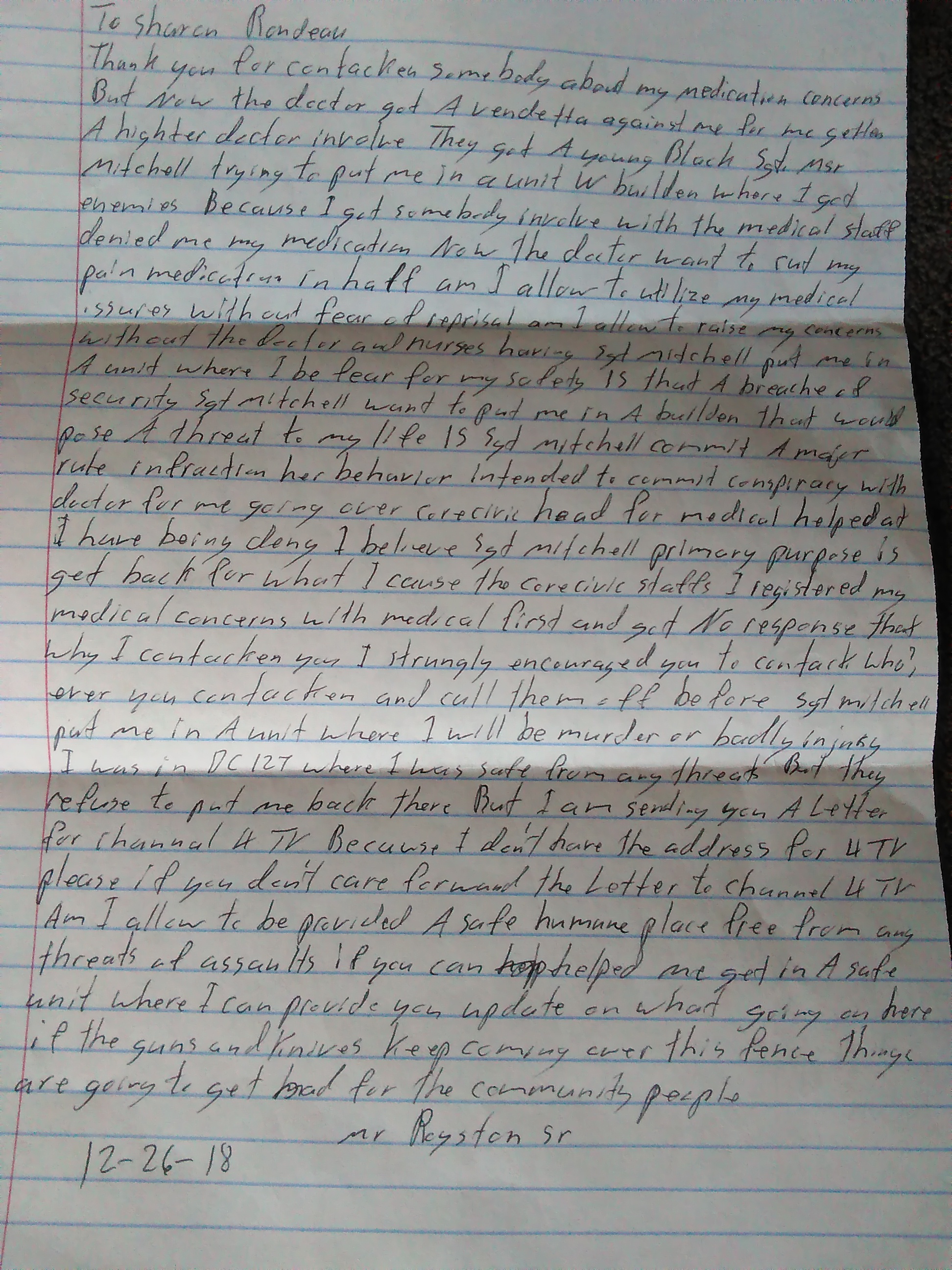 Update, 9:35 p.m. EDT:  Our readers’ log indicates that an individual using a CoreCivic ISP has read the above article.  CoreCivic’s former name is “Corrections Corporation of America.”

One Response to "TDOC Inmate Johnny Royston Sr. Fears for His Life After Reporting Denial of Medications"