HOW MANY 2016 SURVEILLANCE WARRANTS WERE OBTAINED BY THE FBI…FRAUDULENTLY? 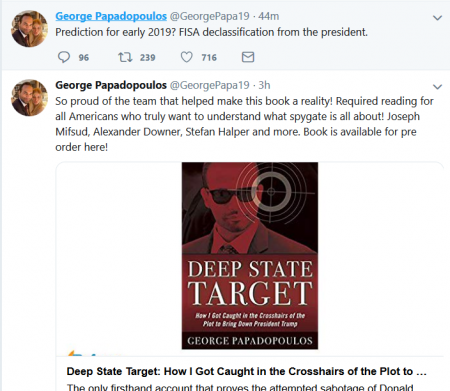 The documents to which he referred are the 20+/- pages redacted from the warrant application for Carter Page, a short-term Trump campaign foreign-policy adviser who was the subject of data collection for approximately a year upon the approval of former FBI Director James Comey, Deputy Attorney General Rod Rosenstein, and two other officials.

In tweets over the last two months, Papadopoulos first hinted, then stated unequivocally, that he, too, was the subject of a FISA warrant in 2016 along with Page, Lt. Gen. Michael Flynn (Ret), and short-term Trump campaign director Paul Manafort, who is now in federal prison on charges and convictions unrelated to the presidential election.

In closed-door interviews on December 7 and 17 with the House Judiciary and Oversight Committees, Comey confirmed that “four Americans” with ties to the Trump campaign were subjects of interest to the FBI, which opened a counterintelligence probe on allegations that the individuals might have been “colluding” with Russian operatives to provide Trump with an election advantage.

Trump has denied that anyone in his campaign, including himself, engaged in “collusion” and that his Democratic rival, Hillary Clinton, should be the focus of a “collusion” investigation.  In May of last year, former FBI Director Robert Mueller was appointed “Special Counsel” to carry on the FBI’s probe in the face of the Comey’s firing.

No mention has been made of an investigation into the Clinton campaign, which contracted with Fusion GPS to have a “dossier” of opposition research compiled on Trump using alleged Russian sources, the contents of which were distributed to the U.S. intelligence community in the waning months of the Obama regime.

The 35-page unverified compilation was used as the basis for the Carter Page surveillance warrants without informing the FISC that it was a political product and had not been thoroughly vetted.  The 412 pages released in July to government-watchdog organization Judicial Watch revealed that Page, who is also in the energy business, was said to have been acting as a “foreign agent” for Russia.

Flynn, who was Trump’s first national security adviser, entered a “guilty” plea for lying to the FBI during a January 24, 2017 interview scheduled on short notice and without a White House attorney present.  At a sentencing hearing last week, the presiding judge reportedly asked Mueller’s team of prosecutors if Flynn should have been charged with “treason” even though his sentencing did not encompass that accusation.

Judge Emmet G. Sullivan ended the hearing by postponing Flynn’s sentencing, with a status hearing to take place in mid-March.

Papadopoulos has also predicted that the redacted information from Carter Page’s warrant applications will be revelatory to the American people if and when Trump makes them public.  In September, Trump pledged to have the pages declassified, only to reverse course three days later with a request to the Justice Department’s inspector general to conduct a review of the material.

Although a frequent Twitter user, including on this Christmas Eve, Trump has not recently mentioned the issue of declassifying the documents.

In addition to claiming that he was “framed” and recorded during what he said were “bizarre” meetings with a half-dozen intelligence agents who approached him unsolicited about “Russians” who allegedly possessed “dirt” on then-Democratic presidential contender Hillary Clinton, Papadopoulos has said that the governments of the UK and Australia, two long-term U.S. allies, schemed to see that Trump did not become president.

Papadopoulos was mentioned at least twice in the transcript of Comey’s December 17 interview with the House committees, at which time Comey would not confirm that Papadopoulos was one of the “four Americans” placed under surveillance by the FBI.  Comey additionally did not confirm Papadopoulos’s claim that he was secretly recorded during his interactions with then-Australian ambassador to the U.S. Alexander Downer and others. 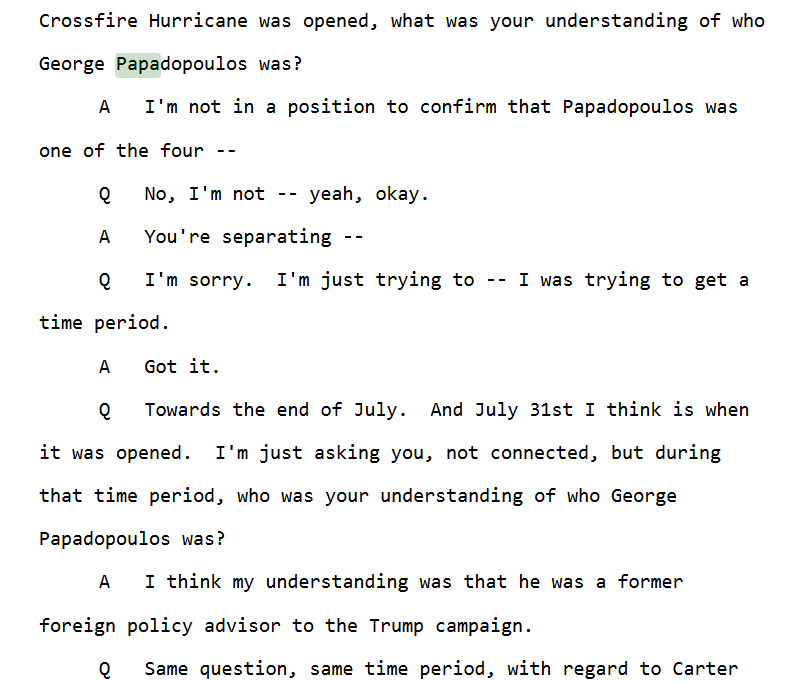 In a book to be published in March, Papadopoulos wrote that “American and international intelligence services” attempted to “sabotage” Trump’s presidential bid and that Papadopoulos was “caught in the crosshairs of the plot.”

Like Flynn, the 31-year-old pleaded “guilty” to lying to the FBI during interviews about his alleged interactions with “Russians” during the campaign cycle.  Papadopoulos has denied having had any contacts with Russia or any of its people and believes he was targeted as a result of his involvement in the overseas energy business.

Earlier on Monday, perhaps as a prelude to his “FISA” tweet, Papadopoulos tweeted that “2019 can’t come soon enough!”

Papadopoulos and his wife have settled in the Los Angeles area.  Just before spending 12 days in prison as part of his plea, Papadopoulos announced that he plans to run for Congress in 2020.