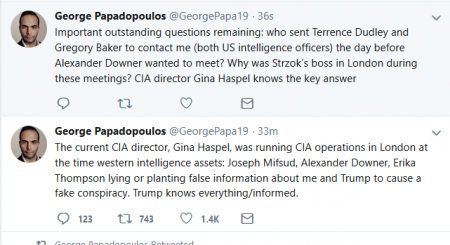 (Nov. 12, 2018) — On Monday night, former Trump volunteer campaign adviser George Papadopoulos implicated the Central Intelligence Agency (CIA) in the alleged plot to frame him as having “colluded” with Russians to help Trump win the 2016 election.

In recent weeks Papadopoulos has publicly claimed that overseas FBI assets — working with other elements of the U.S. intelligence community — plotted in 2016 to ensure that Trump not win the presidential election by making it appear that he and/or his advisers exchanged direct communications with Russians who wished to see him win over Democrat candidate Hillary Clinton.

The 31-year-old former energy consultant said he was approached in 2016 by as many as a half-dozen undercover intelligence assets during the course of his business dealings in Europe, wined and dined, and told by Maltese professor Joseph Mifsud that “the Russians” possessed incriminating information related to Clinton.

After Mifsud imparted that information, true or false, with Papadopoulos in March 2016, Papadopoulos, who was living in London at the time, was shortly thereafter approached by then-Australian ambassador to the UK, Alexander Downer.  Following their informal meeting in a London bar, Downer reportedly told the FBI that Papadopoulos had acquired secret information about Russians possessing Clinton’s emails.

Last week, Papadopoulos claimed that in addition to former Trump foreign-policy adviser Carter Page, he, too, was the subject of a FISA warrant to collect his communications.

Papadopoulos’s second tweet had to do with the names of FBI agents who allegedly approached him “the day before Alexander Downer wanted to meet.” He also invoked the name of now-terminated FBI counterintelligence deputy chief Peter Strzok, whose supervisor Papadopoulos placed in London during a number of meetings.

“Important outstanding questions remaining: who sent Terrence Dudley and Gregory Baker to contact me (both US intelligence officers) the day before Alexander Downer wanted to meet? Why was Strzok’s boss in London during these meetings? CIA director Gina Haspel knows the key answer,” Papadopoulos tweeted.

Strzok, too, was said to have traveled to London in late July 2016 after the FBI launched its Trump-Russia “collusion” investigation.

Erika Thompson was an assistant to Downer.

Earlier on Monday, Papadopoulos tweeted that European leaders critical of Trump’s remarks over the weekend while attending ceremonies in France to mark the 100th anniversary of Armistice Day “are the same ones who were actively colluding with the Obama administration to sabotage him in 2016 with fake information about Russians working with Trump. They are also lying to him about their role in FISA.”

Prominent British figures were critical of Trump for having canceled a visit to a U.S. cemetery in France Saturday because of rainy weather and its accompanying “logistical difficulties.”  On Sunday, however, Trump delivered an address at the Suresnes American Cemetery during which he stood without an umbrella in heavy rain.

Papadopoulos last year accepted a plea agreement after Special Counsel Robert Mueller’s probe, assumed from the FBI in May 2017, accused him of lying to the FBI. He has since said he is seriously considering withdrawing the plea given new information he has learned. According to Papadopoulos, the FBI did not share exculpatory information with him at the time of his interviews.