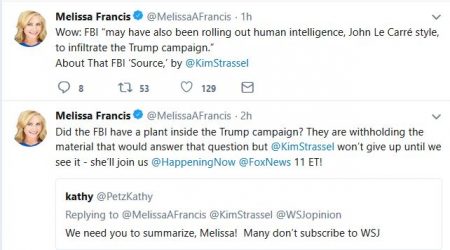 (May 11, 2018) — The author of an article released on Thursday suggesting that the FBI placed a “spy” in the Trump campaign will be a guest of host Melissa Francis during the 11 AM hour on the Fox News Channel.

The article, appearing in The Wall Street Journal and authored by Kimberley Strassel, asks the question but also appears to believe that the answer is “Yes” given that Strassel concludes her column with, “I believe I know the name of the informant…”

Although the article was behind a paywall on Thursday, it is now available for all readers in its entirety.

On Wednesday, The Wall Street Journal’s Editorial Board published an opinion column referring to a Washington Post article which the Board said revealed that the author was provided leaked information concerning a “top secret intelligence source.”

The Editorial Board also referred to an earlier article by Strassel published a week ago about a “classified” letter and subpoena sent by House Intelligence Committee Chairman Devin Nunes to the Justice Department asking for “documents related to a new line of inquiry.”  After Strassel asked the Justice Department about the Nunes requests, the Board said, “a spokeswoman for the Department of Justice sent us a letter responding to the House that revealed that the subpoena was related to a ‘specific individual. And now the Washington Post has been given more details.”

On Thursday investigative reporter Sara A. Carter reported on Nunes’s request focusing on the “specific individual” who now appears to be an FBI and possibly CIA “informant” if Strassel’s instincts are correct.

Carter’s article did not report that Nunes and perhaps other congressmen had been permitted to view some of the documentation held by Justice.  However, she included a copy of a letter dated May 3, 2018 sent by the Justice Department to Nunes denying his request to obtain the documentation but offering to explore “other ways to accommodate” Nunes’s committee.