CITIZENSHIP AT BIRTH, OR ORGANIZED INVASION

by Leonard Daneman, ©2018, blogging at paraleaglnm.com 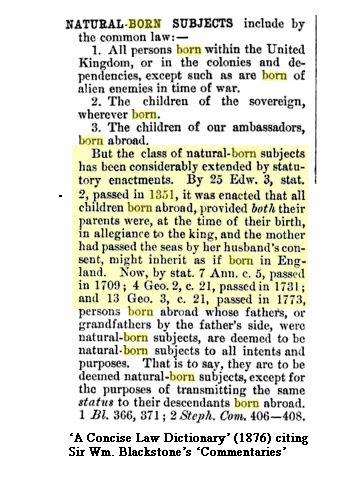 A Few Words About ‘Citizenship at Birth’

The feudal concept of allegiance to a Lord or King by birthplace is from medieval times when wealth was solely in the hands of royalty and the church. The peasant class, or ‘villeins;’ owed complete subjection to the landowner in exchange for protection.

The U.S. Supreme Court changed citizenship law in 1869 relying on old English law, but England had made statutory departures from the feudal concept of allegiance from ‘place of birth’ as far back as 1351. (25 Edw. 3, stat. 2, et seq.) The legal tenet of natural born subjects by sanguinity, through father and mother, was essential to the English Empire while pursuing foreign commerce and colonialism.

The ‘Law of Nations’ by Vattel, a legal authority on Nationality law, noted that a country could only replenish itself with children of its own citizens (§ 212). Both the British Nationality Act of 1772 and our First Uniform Naturalization Act of 1790 determined citizenship of a child followed that of the father, not place of birth. Under both British and U.S. law, a child born on U.S. soil to a British subject was not a U.S. citizen, but British.

In fact, the only reason the ‘jus soli’ was invoked seventy-six years later in the 1866 Civil Rights Act and the 14th Amendment was because freed slaves had no nationality to confer by blood (sanguinity). As property they were determined to be stateless, non-citizens. Citizenship was granted ‘post nati’ because they were ‘born in the United States’ with no ‘foreign subjection,’ and were allegiant to the Union.

However, thirty-years after the ‘born in the United States’ citizenship clause became part of the Reconstruction Acts and our constitution, the U.S. Supreme Court in Wong Kim Ark (1898) decided to abrogate existing treaty with China (The Burlingame Treaty) and statute (Exclusionary Acts, Cooley Act) in order to create a new naturalization law; citizenship at birth to children of alien parents.

In the Wong Kim Ark case (a Chinese cook in his twenties) the court was catering to the Chinese Six Companies, wealthy from the California Gold Rush and commerce, whose great enterprise required more access to Chinese immigrants, and freer passage to and from China. This was hindered by treaty and statute, so the Chinese Companies sued, using Wong Kim Ark as plaintiff.

When the 14th Amendment was proposed and the ‘citizenship clause’ debated, one senator’s comment illustrates the confusion, even then, over what was the legal foundation for citizenship at birth:

The ancient and indisputable citizenship rule of the British common law was the jus soli, under which a person’s nationality is determined by the place of his birth…. It is clear, of course, that the American colonies and the nation they ultimately established had accepted the precepts of the English common law, as part of the heritage from the mother country. Cong. Globe, 39th Congress, 1st Sess. 1262 (1866) (Congressman Broomall)

However, Congressman Broomall was wrong. How? First, as discussed above, even British law from 1351 to 1772 recognized the rightful inheritance of ‘leigance’ from the father, regardless of place of birth. Secondly, the American states barred reliance on English ‘common law’ as precedent unless specifically codified. And, thirdly; the U.S. Constitution enumerated (Art. I, Sec. 8 Cl. 4) congress plenary power over Uniform Naturalization, not to be revised or misinterpreted by common law or the judiciary.

There were competing opinions then, as now, but in the end the Senate approved the ‘citizenship clause’ determining that the citizenship clause of the 1866 Civil Rights Act defined it correctly:

In the first section of the proposition of the committee, the word “citizen” is used. That is a term about which there has been a good deal of uncertainty in our Government. The courts have stumbled on the subject, and even here, at this session, that question has been up and it is still regarded by some as doubtful. I regard it as settled by the civil rights bill, and, indeed, in my judgment, it was settled before. . . The Senator from Maine suggests to me, in an undertone, that persons may be born in the United States and yet not be citizens of the United States. Cong Globe 39th Congress (1866) 2768, 2769 Pres. pro tem Senator Wade (OH)

The main object of the opening sentence of the Fourteenth Amendment was to settle the question, upon which there had been a difference of opinion throughout the country and in this Court, as to the citizenship of free negroes ( 60 U. S. 73; Strauder v. West Virginia,@ 100 U. S. 303, 100 U. S. 306. This section contemplates two sources of citizenship, and two sources only: birth and naturalization. The persons declared to be citizens are “all persons born or naturalized in the United States, and subject to the jurisdiction thereof.” The evident meaning of these last words is not merely subject in some respect or degree to the jurisdiction of the United States, but completely subject to their political jurisdiction and owing them direct and immediate allegiance. And the words relate to the time of birth in the one case, as they do to the time of naturalization in the other. Persons not thus subject to the jurisdiction of the United States at the time of birth cannot become so afterwards except by being naturalized, either individually, as by proceedings under the naturalization acts, [emphasis added]  or collectively, as by the force of a treaty by which foreign territory is acquired. (p. 111) It is also worthy of remark that the language used about the same time by the very Congress which framed the Fourteenth Amendment, in the first section of the Civil Rights Act of April 9, 1866, declaring who shall be citizens of the United States, is “all persons born in the United States, and not subject to any foreign power, excluding Indians not taxed.” 14 Stat. 27; Rev.Stat. § 1992. (p. 103)

Copy and Send this to Your Congressmen added on Wednesday, February 14, 2018

4 Responses to "Copy and Send this to Your Congressmen"