“A REMINDER TO BE VIGILANT” 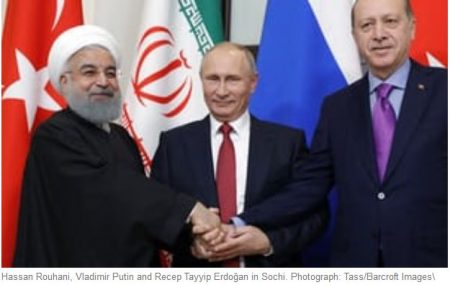 (Dec. 20, 2017) — Last month (November 22, 2017) there was a meeting in Sochi, a resort community on the Black Sea in Russia, hosted by Vladimir Putin.  Attending the get-together were Hassan Rouhani, President of Iran, and Tayyip Erdogan, President of Turkey.  The focus of their summit was to discuss the ongoing civil war in Syria. Even Bashar al-Assad, the current dictator and “President” of Syria, put in an appearance. Will these “three kings” be able to do something about the ongoing carnage in Syria?  If you would like to read further into the topics they discussed and decisions made, click the following link:

Why is this significant?  For centuries, millennia perhaps, these countries have been in constant conflict with one another.  The most recent crisis between Turkey and Russia occurred December 1, 2015 when Turkey shot down a Russian fighter jet and many observers predicted war.  There has always been enmity between Iran and Russia.  Now they all seem to be smiles and are presenting themselves as “the three amigos.”  This is the FIRST TIME IN HISTORY this has happened.

Preceding this conference, Russia deployed its military into Syria (aka the Levant or Holy Land) in September 2015.  This is the FIRST TIME IN MODERN HISTORY Russia has moved militarily in the Levant.  Notwithstanding this, Russia has been an active player for many decades in intelligence-gathering and building relations with the nations of the Middle East.  A treaty executed in January 2017 provides Russia with a 49-year lease (extendable by an additional 25 years; for Russian personnel ONLY) at the Khmeimim Air Base near the city of Latakia, Syria. The Khmeimim Air Base is approximately 235 miles by air from Jerusalem.  This move has given Russia a significant foothold and the ability to be a major “shot-caller” in the region.  The incursion may supplant the USA’s influence while providing the opportunity for Putin to become the preeminent power broker.

The fascinating twist to this series of events is that it was discussed over 2,500 years ago and is certainly worth the effort of further investigation.  If you are new to Biblical prophecy, the following is an opportunity to dip your toe into the water.  For those who study the Word, the preceding is an update and a reminder to be vigilant.

A Jewish prophet named Ezekiel was born 622 years before Christ and had some specific prophecies regarding the countries mentioned above.  In Ezekiel, Chapter 38 (the text of which is included below) you will read the ancient names of countries that will move against Israel in the time before the prophesied “Day of The Lord,” and the following will identify these ancient countries’ names with their modern names.

The following is the text of:

38 Now the word of the Lord came to me, saying, 2 “Son of man, set your face against Gog, of the land of Magog, the prince of Rosh,[a]Meshech, and Tubal, and prophesy against him, 3 and say, ‘Thus says the Lord God: Behold, I am against you, O Gog, the prince of Rosh, Meshech, and Tubal. 4 I will turn you around, put hooks into your jaws, and lead you out, with all your army, horses, and horsemen, all splendidly clothed, a great company with bucklers and shields, all of them handling swords. 5 Persia, Ethiopia,[b] and Libya[c] are with them, all of them with shield and helmet; 6 Gomer and all its troops; the house of Togarmah from the far north and all its troops—many people are with you.

7 “Prepare yourself and be ready, you and all your companies that are gathered about you; and be a guard for them. 8 After many days you will be visited. In the latter years you will come into the land of those brought back from the sword and gathered from many people on the mountains of Israel, which had long been desolate; they were brought out of the nations, and now all of them dwell safely. 9 You will ascend, coming like a storm, covering the land like a cloud, you and all your troops and many peoples with you.”

10 ‘Thus says the Lord God: “On that day it shall come to pass that thoughts will arise in your mind, and you will make an evil plan: 11 You will say, ‘I will go up against a land of unwalled villages; I will go to a peaceful people, who dwell safely, all of them dwelling without walls, and having neither bars nor gates’— 12 to take plunder and to take booty, to stretch out your hand against the waste places that are again inhabited, and against a people gathered from the nations, who have acquired livestock and goods, who dwell in the midst of the land. 13 Sheba, Dedan, the merchants of Tarshish, and all their young lions will say to you, ‘Have you come to take plunder? Have you gathered your army to take booty, to carry away silver and gold, to take away livestock and goods, to take great plunder?’”’

14 “Therefore, son of man, prophesy and say to Gog, ‘Thus says the Lord God: “On that day when My people Israel dwell safely, will you not know it? 15 Then you will come from your place out of the far north, you and many peoples with you, all of them riding on horses, a great company and a mighty army. 16 You will come up against My people Israel like a cloud, to cover the land. It will be in the latter days that I will bring you against My land, so that the nations may know Me, when I am hallowed in you, O Gog, before their eyes.” 17 Thus says the Lord God: “Are you he of whom I have spoken in former days by My servants the prophets of Israel, who prophesied for years in those days that I would bring you against them?

18 “And it will come to pass at the same time, when Gog comes against the land of Israel,” says the Lord God, “that My fury will show in My face. 19 For in My jealousy and in the fire of My wrath I have spoken: ‘Surely in that day there shall be a great earthquake in the land of Israel, 20 so that the fish of the sea, the birds of the heavens, the beasts of the field, all creeping things that creep on the earth, and all men who are on the face of the earth shall shake at My presence. The mountains shall be thrown down, the steep places shall fall, and every wall shall fall to the ground.’ 21 I will call for a sword against Gog throughout all My mountains,” says the Lord God. “Every man’s sword will be against his brother. 22 And I will bring him to judgment with pestilence and bloodshed; I will rain down on him, on his troops, and on the many peoples who are with him, flooding rain, great hailstones, fire, and brimstone. 23 Thus I will magnify Myself and sanctify Myself, and I will be known in the eyes of many nations. Then they shall know that I am the Lord.”’

We have witnessed the gathering of the Jewish people in Israel for the last 100 years and they are now back “in the land,” gathered from the nations.  Titus, as general of the Roman Army who later became emperor, expelled the Jews, the response to a Jewish rebellion in 70 AD referred to as the “diaspora.”  There was NO nation in the land of Israel until May 14, 1948 when the nation of Israel was created by an act of the United Nations.  And, contrary to popular belief, there has NEVER been a nation of Palestine.

Throughout this time (70 AD to 1948 AD) this land was ruled by a variety of nations, the last being Great Britain, which acquired much of the Levant after defeating the Ottoman Empire which ruled from Turkey.  The land of Israel in the absence of the Jews was indeed a desolate place that was of no great importance.  The nation of Israel is now prosperous, the desert has blossomed, and the world has a new supplier of a wide variety of food products as well as cutting-edge technological advancements.

Is the meeting in Sochi the first step in building the alliance that will eventually attack Israel, according to Ezekiel?  Even though the focus of this article has been Ezekiel’s  (the “what will happen in Israel” scenario); it would be remiss not to consider what this “axis of evil” may portend for us and the rest of the world.  Not one of these countries is sympathetic to our interests, and Rouhani, in this meeting, made a veiled threat regarding the US troops who are on the ground in northeast Syria.  How will this new alliance impact the effort to pull Iran’s nuclear teeth?

Will Putin be willing to proliferate nuclear technology to achieve his goals?

Our modern society has “back-burnered” the Holy Bible and relegated many of its teachings to myth.  For centuries scholars have conjectured that there are cities and peoples (mentioned in the Bible) that did not exist because there was no proof of their existence.  An appreciable number of these opinions have been invalidated in the last century.  Biblical history has been proven through application of modern archaeological technique, some of which has been coupled to satellite mapping/imagery and other technological breakthroughs.  It is a certainty that the truths of the Bible are being rediscovered, relearned, and affirmed in our generation.

The analysis of this bit of news and its possible relationship to Deity is, for certain, relegated to the opinion of you… dear reader.  Biblical truth will be proven with time.  Nevertheless, this is a very interesting subject to ponder for the very interesting time in which we live.

We are Living in a Very Interesting Time added on Wednesday, December 20, 2017