A Matter of Life and Death

TDOC SPOKESWOMAN DENIES REALITY, BUT WHO IS LYING TO HER?

(Jul. 8, 2017) — Based on copious letters with extensive documentation from Tennessee inmate Grenda Ray Harmer, #88710, received since late last year, The Post & Email has no reason to doubt the veracity of his statements made since June 5 reporting that he launched a hunger strike which continues to this day if he is still alive.

On June 3, Harmer was transferred to MCCX, where he said that his personal property was confiscated, leaving him without footwear; taken to “high security” without a valid reason; and threatened by MCCX intake personnel.

He reported that his pen and writing paper were also confiscated, with a single pen being provided 1-2 days later by an amenable guard but no writing paper.

His recent letters, written on the backs of TDOC internal memos or by paper donated by an outside source, have described his refusal of food since just after lunch on June 5 to protest the “abusive” treatment he said was undeserved and violated the TDOC’s own policies.

Harmer said that staff have shown no concern for his refusal to eat and alleged that he has had no medical supervision whatsoever since beginning the strike.  He has meticulously documented the deterioration of his condition, particularly in the last two weeks, including a “blackout,” shakiness, and progressive weakness.

A person commits the offense of assisted suicide who:

Intentionally participates in a physical act by which another person directly and intentionally brings about such person’s own death;

Civil action for damages against any person who assists or attempts to assist suicide may also be brought.

On June 18, he requested writing materials to “write some lawyers and state government officials,” but a notation below the request indicates, “never got any.”

Harmer has repeatedly said that he will not “back down” from his stance unless MCCX stops its “abuse” of him, restores the remainder of his property, returns him to TCIX, and houses him with a cellmate who is not a member of a gang.

Over the last two weeks, The Post & Email has contacted Phillips’s office on two occasions and left messages with his administrative assistant with no response received.  We called the Commissioner’s office, where we spoke in person with a Betsy Fletcher of the “Mental Health” unit, who said she could not comment to the press.  However, Fletcher transferred us to the “Legal Affairs” unit, where we left a voice message about Harmer’s situation to include his location and TDOC number.

We have also called and sent an email to Tennessee Gov. Bill Haslam, receiving no response. 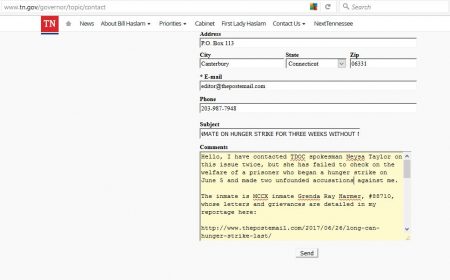 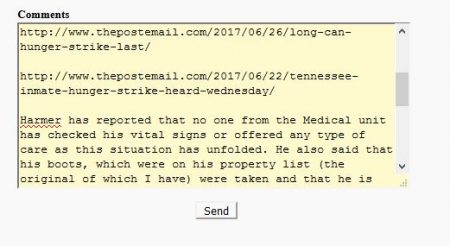 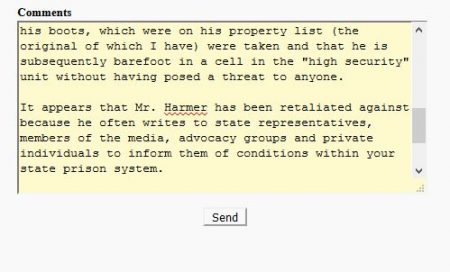 We have sent three emails to TDOC Communications Director since Harmer’s protest began, the first two of which requested that she investigate his health and well-being but to which Taylor responded by accusing us of “threatening” her.

Our efforts were redoubled on Friday evening after a source who receives Harmer’s correspondence faster than we shared notes Harmer sent containing end-of-life instructions and large quantities of documents he has accumulated during his time in prison.

On July 3, The Post & Email published a note from Harmer enclosed with one of his letters stating, “Little by little I’m going to send you what I think I’ve not sent you. If I did then just throw it away.”

As The Post & Email’s readers can imagine, this saga has been extremely painful and difficult for those receiving updates on Harmer’s rapidly-worsening condition who had hoped to secure intervention in the belief that it is incumbent upon those with information to act upon it to save a life.

In the note shared with us from the other party on Friday, Harmer wrote that he is now “enduring a lot of pain,” possibly as his organs shut down from lack of fuel in what is now the 33rd day of his protest.

Scientific and medical research suggests that while survival without food but with hydration depends on an individual’s general health, psychological status and any existing medical conditions, few survive beyond 40 days, and complications often arise.

Harmer said when he launched the strike that he would see it through to its “resolution,” whatever that might be. In a June 29 detailed memorandum directed to Parker, Harmer enumerated the reasons for his hunger strike and suggestions for how the TDOC could improve its services to inmates such as he who are within three years of release. “I need help too. Help me,” Harmer wrote.

At the same time, he concluded the memo with “Lets pray this ends well for me.” [sic]

While still at TTCC, Harmer wrote to Taylor on two occasions to report that his cellmate was gravely ill and was not receiving the medical attention necessary for his survival. Taylor responded to Harmer by thanking him for his concern and assuring him that “The health and wellness of the inmates we house are of the upmost [sic] importance to us.” 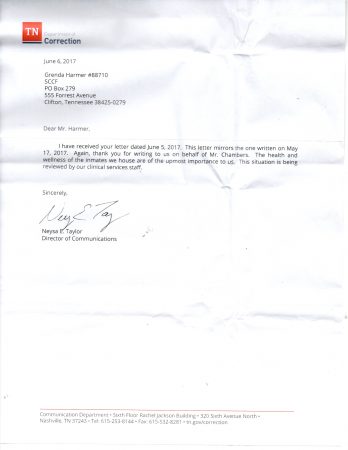 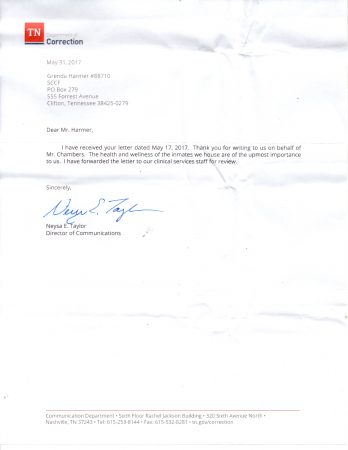 Recently Harmer reported of a second occasion on which he was paid by CoreCivic for work he said he never performed, terming the transactions “fraud.”  He also documented having been enrolled on two different occasions into the “Pro-Social Life Skills class,” though ineligible to participate by TDOC policy.

His accounts mirrored those of Walter Francis Fitzpatrick, III during his incarceration in 2015, when NWCX staff attempted to coerce him into taking the class although he was unqualified based on his history.

Later in June, Harmer reported that some of his personal belongings were returned, including family photos, his television, and a pair of shower shoes.  His desert boots, however, were reportedly withheld.

As The Post & Email has reported, we reached out to Taylor on June 19 to request a health-and-welfare check on Harmer, as we had not heard from him since just after the strike began. Taylor declined to assure us that she had personally checked on his circumstances, referring us to the TDOC inmate-locator tool of which we were well aware.

On Friday morning, The Post & Email left phone messages for Tennessee State Rep. John Ray Clemmons and Rep. Barbara Cooper, both of whom had frequently been copied on Harmer’s numerous memoranda detailing deficiencies at the CoreCivic-run Trousdale Turner Correctional Center (TTCC), where he spent nine months between July 2016 and April of this year.

Harmer’s reports of TTCC inmates dying from drug overdoses, frequent and lengthy lockdowns of up to 23 hours each day, erratic or nonexistent dispensing of physician-prescribed medications, uncontrolled gang activity, and poorly-trained staff were borne out in a four-part series aired by Nashville’s WSMV between June 19 and June 22. The mini-documentary, produced after a nine-month investigation, was hosted by award-winning, longtime news anchor Demetria Kalodimos, who before the broadcasts complimented The Post & Email’s information-gathering efforts.

Kalodimos additionally provided us with advance notice that the series would be airing and when.

The mini-series was not the first occasion on which Channel 4 had reported on corruption within Tennessee’s prison apparatus.

On Friday night, our email to Taylor and her deputy, Alison Randgaard, was blind-copied to individuals who have expressed an interest in Harmer’s situation and have attempted to assist in various ways.

Ms. Taylor, the information I have this evening is that the above MCCX inmate is close to death after 32 days on a hunger strike with no medical intervention.

He will need emergency medical assistance immediately to save his life if it is not already too late.

Taylor’s response, sent on Friday but not received until Saturday morning despite our having checked until 11:00 p.m. EDT, reads:

As you are aware an inmate’s medical information is private.  Therefore, I can not comment on Mr. Harmer’s health. I can inform you that the information you have received is incorrect.

Sent from my iPhone

The Post & Email observes that neither the TDOC nor CoreCivic has ever requested that we correct, retract, or remove an article in which they have respectively been the subject.