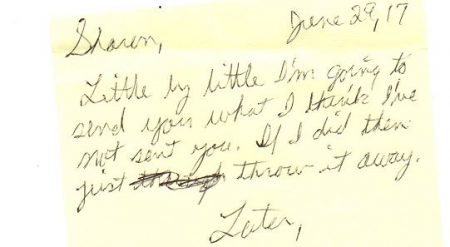 (Jul. 3, 2017) — On Monday, The Post & Email received three letters from TDOC inmate Grenda Harmer, #88710, who has adhered to a hunger strike commencing on June 5 to protest the treatment he reported he received by correction officers upon his arrival at the Morgan County Correctional Complex (MCCX) in Wartburg.

Based on several studies, a human can survive some weeks without food, but rarely more than six weeks, and will often experience medical complications considerably before that time which can include hallucinations, seizures and organ failure.

To the best of our knowledge, Harmer has been subsisting on institutionally-packaged milk and water, which a letter dated June 28 confirms.

As was common in his correspondence prior to his June 3 relocation to MCCX, Harmer enclosed extensive documentation in the envelopes received today, including a note which states, “Little by little I’m going to send you what I think I’ve not sent you.  If I did then just throw it away.”

Over the last year, Harmer has been housed at four different prisons:  TCIX in Only, TN; TTCC in Hartsville; SCCF in Clifton, and MCCX for the last month.  He reported that after he was relocated to MCCX in the early morning hours of June 3, inmates at the new location were allowed to rifle through his institutional file and intake correction officers confiscated his personal belongings without cause.

He reported that he was also placed in solitary confinement, or segregation, without being provided a legitimate reason or committing an offense.

TDOC policy states that all personal property of inmates be noted on an official property log.  A pair of boots which Harmer purchased from Union Supply, an approved Tennessee prison vendor, some time ago is listed on his property log, which The Post & Email has in its possession.  However, Harmer reported that MCCX intake officers justified their non-return of the boots with the claim that they are no longer available for purchase.

Harmer said that he was threatened with signing a property receipt form upon his arrival even though his belongings were kept from him, which he refused to do.  H related that an officer made the comment, “He’s a troublemaker; take care of him” and that he was then taken to “high security,” which is solitary confinement.

Property placed in storage is done so for not more than 30 days, which in Harmer’s case, expired on Sunday.  An extension must be approved and documented by the warden.

Calls made to Warden Shawn Phillips’s office both last week and today were routed automatically into the voice mailbox of an administrative assistant who thus far has not responded.

He also corrected the previous record to reflect that MCCX returned his family photos.  Previously, he reported that his television set and some personal items were returned but not the photos.  “Most of my knickknacks (ie. pens, sandals, shower shoes, razors, hygiene, etc.) were kept. I do have one pair of my shower shoes. So I got something to wear on my feet. Feels good! Shoes make a difference even if it’s shower shoes,” he wrote.

In his two-page letter, Harmer related that he “blacked out” after he awoke in the middle of the night “critically low on fluids.” 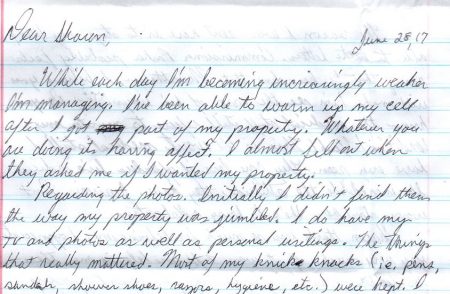 In one of the envelopes postmarked June 30, 2017 was the pink copy of an “Inmate Inquiry – Information Request” form which Harmer used to request “5 or 6 envelopes and some lined paper to write some lawyers and state government officials.”

Below the request was a notation written in pen stating “never got any”. 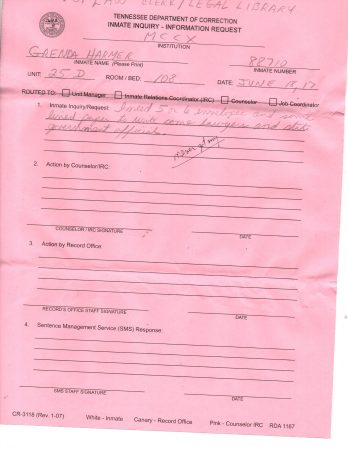 A former TDOC inmate told us on Monday morning that “When I was in there, some of the guys went on hunger strikes, and these people just don’t care. You’re just a piece of red meat to them, and they don’t care if you live or die.” That observation was echoed by Harmer early in his protest as well as in the letter pictured above.

As noted in his letter, Harmer included a letter from TDOC Communications Director Neysa Taylor sent in response to a complaint he filed about TDOC Contract Monitor Robert Turman, who Harmer claimed is ineffective in his position.

Harmer had previously sent out numerous grievances, reports and complaints about prison staff, particularly when he observed that they allegedly violated their oath of service as well as the TDOC Administrative Policies and Procedures. His complaints were often sent to TDOC Commissioner Tony Parker, a number of state representatives and senators, the No Exceptions Prison Collective (NEPC), the ACLU, and other media organizations.

To the best of our knowledge, he received one response in the form of a card from a state representative and acknowledgment letters from NEPC.

On June 14, NEPC wrote a letter to Phillips on Harmer’s behalf, copied to a number of other parties to include an ACLU attorney, requesting that the treatment Harmer alleged he received be reviewed and positing that the frequent relocations he experienced in the course of the year stemmed from retaliation for his outreach to the media.

The Post & Email is unaware of any response which Phillips might have provided. However, in phone calls made to TDOC offices in Nashville last week, this writer was told by the sole live person with whom we spoke that “No one is authorized to say anything to the media except Ms. Taylor.”

The Post & Email has included Taylor’s letter for two reasons: (1) to demonstrate that we believe that Harmer is cleaning out his files in the event that he does not survive the hunger strike; and (2) to prove false Taylor’s accusation of this writer of failing to properly verify the “accuracy” of information contained in the “letters” we receive from Tennessee inmates.

As no one from the TDOC other than Taylor is authorized to speak with the media, it is very difficult, if not impossible, to verify any allegations that are made. The Post & Email always strives to obtain both sides of a story, but if one side will not comment, we publish the information available to us, as do other media organizations.

In the case of TDOC inmates, as Taylor noted in the email chain below, an inmate-lookup tool is available at the TDOC website which The Post & Email uses routinely to verify the identification and number of all inmates from whom we receive correspondence. 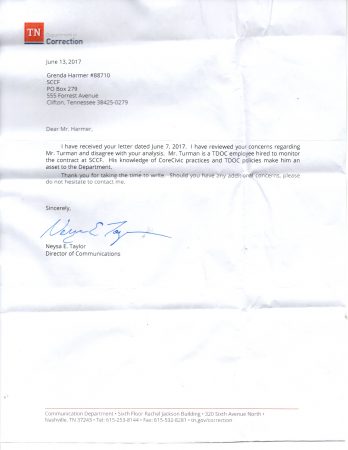 Taylor additionally accused The Post & Email of threatening her.

Her exchange with this writer reads as follows, in backwards chronological order:

My email was not meant as a threat in any way.  Rather, it was intended to give you another day to respond, which I believe was a professional courtesy to you.  Moreover, I am seeking to “substantiate” the inmate’s status.

You may know that many of my reports have been corroborated by recent reportage by WSMV:

I have checked the TDOC FOIL system on this matter already but in the past have found that some inmates, while continuing to be listed there, are noted as “deceased.”

I find it interesting that despite the medical considerations, no one will simply confirm that he is alive.  I did inform you on Monday morning that to the best of my knowledge, he was on a hunger strike and asked out of concern that you check on his status.

You emailed me yesterday and I was out of the office on business yesterday.  Of course you can always check the status of an inmate on the TDOC website.  That website is TN.gov/correction.  Also, medical information is protected and will not be disclosed.  As the website shows Mr. Harmer is still incarcerated at MCCX.

Finally, your threat of publishing a blog post before the Department has a chance to respond doesn’t hold much weight since you frequently publish unsubstantiated claims and alleged “letters” without vetting their accuracy.

*** This is an EXTERNAL email. Please exercise caution. DO NOT open attachments or click links from unknown senders or unexpected email. – STS-Security***

As I did not hear back from you regarding my last inquiry as to whether or not Grenda Harmer, #88710, is alive or deceased, I am going to give you this final courtesy inquiry before writing a story about it.

As you may know, Harmer wrote to me regularly, sometimes four times a week, and I have heard nothing since being told in his last letter, dated June 8, that he had gone on a hunger strike to protest his treatment after being transferred from SCCF to MCCX.

I plan on publishing an article on Thursday, whether or not I receive a response to this message.

Is this prisoner still alive?

Thank you for taking the time to email me.  I will look into your concerns.

*** This is an EXTERNAL email. Please exercise caution. DO NOT open attachments or click links from unknown senders or unexpected email. – STS-Security***

Good morning, Ms. Taylor.  I was made aware earlier this month that MCCX inmate Grenda Ray Harmer, #88710, had been placed in high security, threatened with bodily harm, and again deprived of his medications.  I have it firsthand that he went on a hunger strike but have not heard anything more since June 8.

We have also been told that writing paper was confiscated so that he cannot communicate with anyone on the outside.

Would you be able to check on this inmate’s health and welfare?