“THE ENEMY LIES WITHIN” 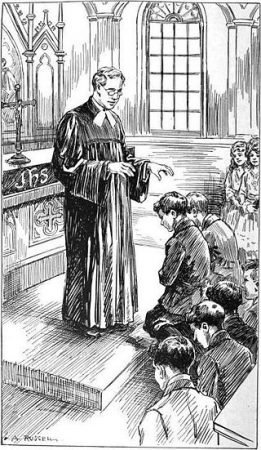 (May 24, 2017) — “Good evening, ladies and gentlemen, and welcome to an impromptu special edition of ‘Pulse of the Nation.’ I was on the bridge of my fishing yacht, the Rocinante, when I got a call from Pastor Dunkin, who runs the church down on Hawthorn Street. I would’ve pulled up to the pier but, instead, just beached it and carried it to the back of my pickup truck. Actually, the fiberglass kayak doesn’t have a bridge, not like, say, on the Queen Mary, but I do call her ‘Rocinante,’ you know, named after Don Quixote’s equestrian method of mobility.

“So, as you can see, we’re in the balcony of the church about to hear the pastor’s speech, which is starting now.”

“Hello, devoted believers of His Good Works. Yesterday we had a yard sale and we’re very disappointed at the number of potential bargain-hunters. It’s been my observation that the economy has turned the proverbial corner and people are figuratively burrowing into their – previous — comfortable niches and back to their old ways, which means we’ll see them all at Easter. People aren’t looking to sell unneeded items to gather needed dollars, as when Obama was the de facto president.

“It has also occurred to me that most people, make that many people, live lives of desperation brought upon themselves through a completely misguided sense of self worth. They harbor delusions of grandeur brought about by visions of Superman saving the world from desperadoes, never realizing that the enemy lies within: avarice is indeed a cruel mistress.

“One cure is, of course, time, although even time has its limitations. People get bored; give up on unrealistic dreams, for instance, being successful without effort; and dreaming of winning the race that’s never run, as in graduating with honors without attending class or opening a book. Most of us realize that living a righteous life takes effort, but we also understand that the reward is peace of mind, which is a priceless commodity.

“The examined life, as Jesus told us, rewards itself perpetually. But how can we expect to live perfect lives, to follow in His footsteps, in today’s world surrounded by liars and chaos? How do we insulate ourselves from those who wish us harm? How do we decipher the noise and learn the truth?

“It has been said that there are those among us who have no empathy, and that it has always been so. No doubt in circa 2017 AD we have just as difficult a time exposing the cheat as those who searched in 1917, or even in the year 17 AD. That crime and sloth has been with us for as long as we’ve been on this planet and has to be accepted as a given, but just because some of us are lazy doesn’t mean we have to take part or approve. On the contrary, those who walk in Jesus’s footsteps will always prevail over those who do not. And on that note, let us remember LTC Terry Lakin and pray that President Trump pardons him.

“So why do others, many others, remain blind to facts? Why are there so many of us who refuse to see the writing on the wall? Unfortunately, that’s just the way our crazy world works. Hitler never would’ve been made the Fuhrer of the German people without the tacit approval of many of its citizens, perhaps the same percentage of our population who allowed Obama to take over our government, who allowed CAIR to be in our country, and who allowed the Muslim Brotherhood to walk in the hallways of the White House, the same Muslim Brotherhood that Egypt has outlawed by declaring it a terrorist organization.

“The answer is simple: about half of a given population are always behind the curve, slow to realize but quick to follow. But each of us has our place, as the Good Book reminds us, so we should extend pity when pity is warranted. That said, the chance of changing the minds of ‘The View’ viewer is just as remote as a ski resort in Death Valley; or, more accurately, the chance that the Muslims in the United States will assimilate and embrace the Constitution or the Islamists will remove the words ‘kill’ and ‘behead’ from the Quran.

“Today’s so-called ‘radical Muslim’ has got to be treated as a rabid dog. There’s no way around it; it’s the only viable and permanent solution.

“In conclusion, let me leave you with a question: would the world be a better place if there were no Muslims? Thank you for attending our service this morning. Good day to you and may the Good Lord look after you.”

“And that’s a wrap. On behalf of the crew, I’ll be wishing each of you a goodnight: Goodnight.

“Piece of cake. Anyway, I’m going back to fishing, but I’ll welcome anyone who wants a burger: my treat.”

Postscriptum: Look, I don’t care how you cut it, but as long as the Quran instructs the village idiots to “kill the unbeliever (specifically Jews and Christians) wherever you may find them” and to “behead those who…” et cetera, et cetera, et cetera,” nothing will change: tomorrow will look like yesterday and the headline will continue to read that innocents were killed today.