DEFENDANTS HAVE 30 DAYS TO RESPOND 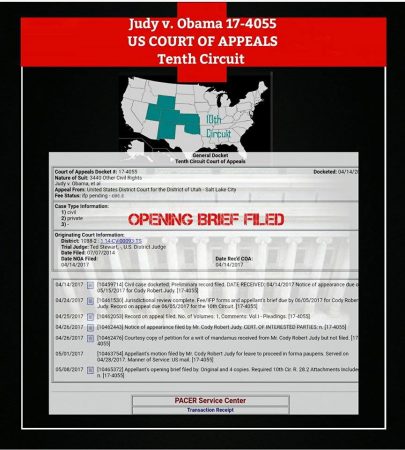 (May 9, 2017) — On Monday night, Obama eligibility plaintiff Cody Robert Judy reported that his opening brief is now reflected on the docket of the Tenth Circuit Court of Appeals as “filed.”

The 25-page brief, which claims that the defendants violated two anti-trust laws and harmed Judy’s own presidential campaigns, can be read here.

In 2008, 2012 and 2016, Judy ran for president as a Democrat.  The suit alleges that Obama, the Democrat National Committee (DNC), and Obama’s political organization, Organizing for America (OFA) “conspired or joined in illegal actions in conspiracy to elect a Constitutional Ineligible Candidate to the Office of President” [sic] (p. 5).

First filed in July 2014, the case was appealed to both the Tenth Circuit and the U.S. Supreme Court once before.

While the Tenth Circuit in 2015 approved Judy’s motion for in forma pauperis status, U.S. Supreme Court Associate Justice Sonia Sotomayor denied it in early October of that year.  As Judy was then unable to proceed, the case lay dormant until a new development in December 2016 spurred him to refile it with the U.S. District Court for the District of Utah, where it had begun its initial journey.

On April 10, U.S. District Court Judge Ted Stewart dismissed the case, after which Judy appealed it not only to the Tenth Circuit, but also to newly-sworn-in U.S. Supreme Court Associate Justice Neil Gorsuch last month.

As a result of the newest development, the defendants have 30 days to respond.

Since 2008, Judy has challenged Obama’s presidential eligibility based on his belief that Obama is not a “natural born Citizen,” as the U.S. Constitution requires, for the nation’s chief executive and commander-in-chief.  Also during that campaign cycle, Judy filed a lawsuit against Sen. John McCain for the same reason.

The chief strategist for Hillary Clinton, another Democrat seeking the presidency in 2008, reportedly had considered using Obama’s alleged “lack of American roots” during the primary campaign to woo voters away from Obama.

In modern times, most Americans understand the term “natural born Citizen” to mean “born in the United States” and not “naturalized” by means of a congressional statute.

On Obama’s 2008 campaign website, FighttheSmears.com, he claimed presidential eligibility by virtue of the 14th Amendment and his alleged birth in Hawaii.

The 14th Amendment was passed in 1868, some eight decades after the ratification of the U.S. Constitution in 1789. Section 1 of the amendment, which deals with citizenship, reads:

Obama’s claimed father was a British and later, Kenyan, citizen who reportedly came to the U.S. for higher education. While most reports say that Barack Hussein Obama the elder attended the University of Hawaii and later Harvard, an Associated Press report from 1990 states that he attended Oxford University in the United Kingdom followed by Harvard.

A present-day interpretation of the 14th Amendment is that anyone born in the U.S. is a citizen, regardless of his parents’ status.  The same concept appeared in 1898 in the majority opinion of the U.S. Supreme Court maintaining that Wong Kim Ark, born in California to Chinese citizens who were at the time legal residents of the United States but later returned to China, was a U.S. citizen.

The court found that Ark was “subject to the jurisdiction” of the United States based on his birth circumstances.

The issue of whether or not Ark was a “natural born Citizen” was not raised.  Rather, the court termed him a “native-born citizen” in accordance with “international law.”

Congressional records show that the citizenship of the parents was once a factor in determining citizenship, including “natural born” status.

Judy believes, because U.S. senators and representatives are required by Article 1 of the Constitution to be simply “citizens,” that in order to be considered a “natural born Citizen,” one must meet a higher standard of allegiance to the nation than just a single generation.   In a 2011 interview, he told The Post & Email, “…natural born Citizens don’t need Congressional Acts or non-binding U.S. Senate resolutions to declare them natural born Citizens. I’m a natural born Citizen, having two citizen parents and being born in the state of Idaho well within the parameters of the United States, and I’ve had no such problem and never had to appeal to Congress over and over again during the span of my life.”

While a majority of the American public appeared to accept Obama’s assertion of a birth in Hawaii in 1961 and therefore his eligibility, three key documents allegedly issued by government entities bearing his name were later termed fraudulent by credible experts:  a “short-form” Certification of Live Birth; a “long-form” birth certificate image; and a Selective Service registration form.

The two latter documents were found in 2012 to be fraudulent by former New Jersey detective Mike Zullo, who conducted what became a five-year investigation at the request of then-Maricopa County, AZ Sheriff Joseph M. Arpaio.

Within days of the commissioning of the probe, Zullo and a team of volunteers with experience in law enforcement found that the long-form birth certificate image posted at whitehouse.gov on April 27, 2011 presented a number of problems.  After informing Arpaio, Zullo expanded his investigation to include two fact-finding trips to Hawaii in which Health Department officials refused to speak with him.

On March 1, 2012, Zullo and Arpaio held a press conference to inform the public that probable cause was found to believe that the birth certificate image is a “computer-generated forgery.”  At the same time, Zullo declared the document purported to be Obama’s Selective Service registration form to be fraudulent.

Throughout the investigation, Arpaio stressed that its goal was to discover who created a forgery of Obama’s birth record and why, not on where he was born.

Zullo has called the long-form birth certificate image “the foundational lie” of the Obama presidency, stating that it was posted with “the intent to deceive.”

Neither Congress, the media, nor the FBI investigated Zullo’s findings, and Obama was re-elected to a second term in November 2012 without having to respond to the reported forgery of his government documents.

Questions arising from credible sources having reported that Obama was born in Kenya or Indonesia dating to before his presidential candidacy have never been answered.

At a final press conference on the investigation in December, Zullo reported that two forensics analysts had conducted their own probe of the birth certificate image and concluded, from two respective vantage points, that it cannot be authentic.  It was this revelation which caused Judy to refile his case in January with the Utah District Court given that U.S. anti-trust laws allow for the inclusion of alleged criminal activity in civil cases.

Rather than reporting what Zullo disclosed, the AP, among other media outlets, stressed that Arpaio’s investigation was “closed.”

In an interview on Monday night, Judy said that his latest blog post breaks down the substance of the brief into six bullet points itemizing what he believes occurred among the defendants to “form a monopoly which acted as a cartel” to propel an ineligible candidate to the White House which not only harmed Judy’s campaign, but also deceived the American people. 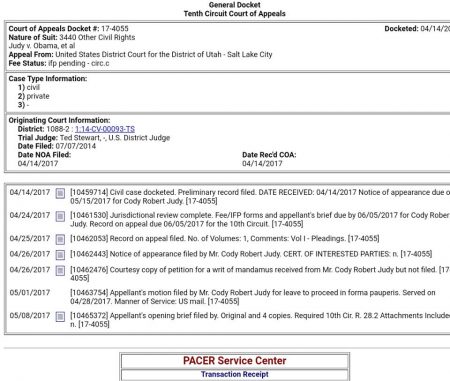 Anyone wishing to assist Judy financially in his efforts may do so here.