Zullo: “The Media Won’t Even Discuss the Findings” on Obama Birth Certificate 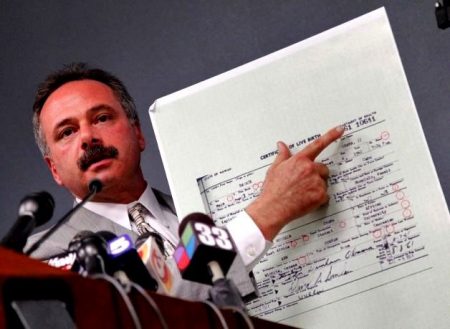 During his introduction, Gallups asserted that anyone who had doubted the authenticity of the birth certificate image bearing Obama’s name was now “vindicated.”

Zullo began by recounting that the mainstream media and detractors of the investigation have constantly tried to claim that the discovery that the image posted at whitehouse.gov is a forgery was “debunked.”

Zullo’s work was commissioned in August 2011 by then-Maricopa County Sheriff Joseph Arpaio at the request of 250 of his constituents after reports of the image’s questionable authenticity were released publicly by several graphics and computer experts.

Both Gallups and Zullo reminded the audience that two forensic analysts working in different disciplines without knowledge of each other agreed that the image is not genuine.  While the media provided some coverage of the first two press conferences held in 2012, Zullo noted that the additional information concerning the forensic analysts which he revealed on December 15, 2016 was virtually ignored or misreported.  “The media won’t even discuss the findings,” Zullo said.

This publication has observed that outlets such as the Associated Press failed to report the new information but stressed the fact that the investigation was “closed” and Arpaio was to leave office at the end of the month.

The fraudulent document goes to the issue of whether or not Obama was constitutionally eligible to serve as president given that Article II, Section 1, clause 5 of the U.S. Constitution requires the nation’s chief executive to be a “natural born Citizen.”

Years ago, Zullo called the birth certificate forgery “the foundational lie” of the Obama “presidency.”

Zullo affirmed to Gallups that he has not released all of the evidence gathered by the investigation and is seeking a congressional hearing at which to divulge it.

Approximately 20 minutes in to the show and just before a commercial break, Gallups said he thought that “big stuff” was to come.

Zullo: “The Media Won’t Even Discuss the Findings” on Obama Birth Certificate added on Friday, April 21, 2017

2 Responses to "Zullo: “The Media Won’t Even Discuss the Findings” on Obama Birth Certificate"