“HISTORIC PROGRESS FOR THE AMERICAN PEOPLE” 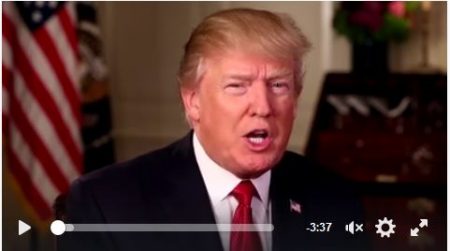 (Apr. 7, 2017) — In his weekly video address, President Donald Trump said his administration has taken “quick and bold steps” to enact his agenda as pledged during the campaign.

Beginning with the economy, Trump said that “93% of our domestic manufacturers have expressed optimism in the future,” which he said is a “historic record.”

He stressed the accelerated efforts of Immigration and Customs Enforcement (ICE) agents to apprehend and detain criminal illegal aliens following what he said was a “full-fledged border crisis” inherited from the Obama regime.

Trump said that illegal border crossings have been reduced 64% from February to March of this year.

“With time, dedication and effort we will get the job done,” Trump said, referring to better border protection and immigration policies.

Trump did not mention his order, announced on Thursday night after it was carried out, of an airstrike on a Syrian airfield believed to have been the storage facility for chemical weapons which killed scores of Syrians on Tuesday.

One Response to "In Weekly Address, Trump Stresses “Safety, Security,” and Economic Growth"