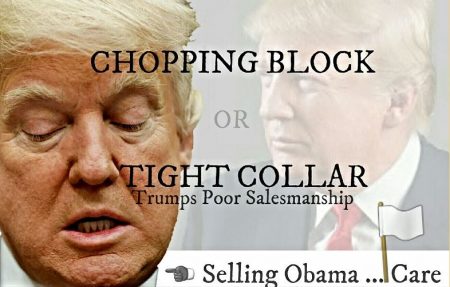 REPAIRING & RESTORING OBAMACARE is essentially what President Trump has done in his failed and now infamous No-Name Repeal & Replace pulled before being even out on parole. The strategy for Democrats shouldn’t be on how to doom Trump, but to simply stand aside and let him break every campaign promise that comes close to 1/5 of the national debt.

Of course the Affordable Care Act – ACA is unknown to the Citizenry; they were sold Obamacare. I have never witnessed in my lifetime nor did I ever imagine President Trump as well the GOP Majority would be such horrible salespeople on the campaign promise of “Repeal & Replace.”

A ‘ruse’ is an action designed to deceive or to trick – it’s a tactic. Fundamentally the Republicans are geniuses at it. Take the Patriot Act, for instance, garnered with thoughts of Americanism. True to the Red, White, and Blue’s Freedoms and Liberties, the Patriot Act opened the door to everything that violates trust between the people and the government. Of course some would argue during wartime that would essentially be necessary and citizens’ rights in a state of war are severely suspended in martial law.

The point is Republicans did not even name their version of the Repeal & Replacement of Obamacare. Are we surprised that it was pulled without the Republican votes to push it through? How did President Trump sell this hybrid of Obamacare? With Obama’s name…you mean the ineligible usurper who violated the U.S. Constitution’s qualifications for eight years with the ruse of his identification fabrication?

Oh! And President Trump is just too stupid to recognize invalid Obama, which is the name of Obama on Obamacare is valetudinarian? The supposed promise to Repeal and Replace Obamacare with what, “No-Name Repeal and Replace”? That was the tactically good plan? The first thing you do is NAME YOUR LEGISLATION. That’s how something gets sold. Anyone know what Trump’s proposal was called? “World’s Greatest Health Care Plan of 2017 Bill 1275

Think I haven’t spent any time on solutions? Of course Trump got my proposal! Called Code-Care

Forgetting JUSTICE is the Recipe for FAILURE added on Saturday, March 25, 2017

3 Responses to "Forgetting JUSTICE is the Recipe for FAILURE"