“BY ANY MEANS NECESSARY” 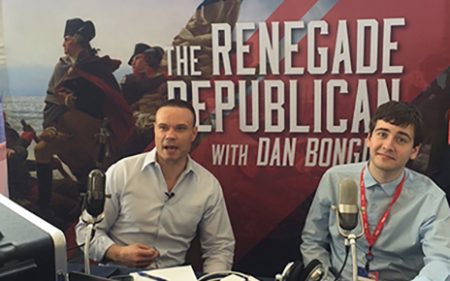 (Mar. 7, 2017) — On his Monday radio show, “The Renegade Republican,” former Secret Service Presidential Protective Division agent Dan Bongino discussed the mainstream media’s initial claims that Trump associates were under investigation for connection to the Russian government followed by former Director of National Intelligence James Clapper’s denial on Sunday that any wiretapping of Trump Tower was ordered “to his knowledge.”

Bongino is a former New York City police officer who, after being accepted into the U.S. Secret Service in 1999, provided protection to President George W. Bush and Barack Hussein Obama, particularly on overseas trips.  On Sunday, Bongino announced on Twitter that he would begin releasing information he acquired on the Obama regime during the coming week. “It’s time,” he said.

Following Trump’s startling tweets on Saturday morning claiming that Obama “ordered” his Trump Tower office wiretapped in October, the media visibly circled its wagons to deny that Obama had been involved. However, former U.S. Attorney General Michael Mukasey and others have stated, respectively, that the wiretapping likely or definitely occurred and that given the Foreign Intelligence Surveillance Act (FISA) of 1978, which authorizes the attorney general to approve a wiretap application through the FISA court, Obama would have known about it.

Approximately two-thirds through the 30-minute broadcast posted at Conservative Review, Bongino turned from his excoriation of the mainstream press to his observations of the Obama regime while he traveled on the same aircraft and worked in close proximity during the course of his Secret Service duties.

While Bongino said that he is not claiming that all of Obama’s political appointees were “bad,” he said that he saw indications that Obama surrounded himself with people concerned about Obama’s welfare “and not loyal to the United States of America.”

He suggested that in their adoration of Obama, the acolytes see Donald Trump “as some kind of a fraudster who is evil and has to be taken down.”

“They’re not operating on facts in the world of reality,” Bongino said, which he said could include “leaking information, lying to the media, committing federal felonies, submitting affidavits for wiretaps that leave out exculpatory evidence, continuing investigations even though we know they are dead ends…”

Readouts of Trump’s conversations with the Mexican president and Australian prime minister, as well as the contents of telephone calls conducted between Trump’s then-national security advisor Michael T. Flynn were leaks to The Washington Post and The New York Times, causing a maelstrom of criticism and hyperbole which eventually led Flynn to resign on February 13 after only 24 days in his position.

“These are not good people,” Bongino emphasized. His co-host, Joe, responded by repeating Malcolm X’s motto, “By any means necessary,” which Bongino then affirmed.

During the last few minutes of the show, Bongino speculated, based on his observations, that Obama operatives are now fearful that their actions during the Obama years, including those involving Russian connections, will be exposed due to Trump’s unexpected November victory.

“Believe me, there are staffers listening to this who know exactly what I’m talking about,” he contended.  “There’s information out there about what Barack Obama did, what some of his people did when they were in office, that they don’t want uncovered that’s going to make them look very bad.”  He said that had Hillary Clinton won, the operatives believed their actions would have been “buried.”

“Now that they lost, they are freaking out.  They’re in panic mode right now…” Bongino said.  He speculated that Obama operatives feel they “have to get Trump out of there before this information comes out and some of the activities these people were involved in.”

He then invoked a Forbes article published on Monday detailing connections between the Democrats and the Russian government, including the sale of 20% of the U.S.’s uranium supply to the Russians.  As of press time, The Post & Email has not located the article, although the uranium sale was widely reported by the mainstream press in April 2015.

Bongino concluded his show by urging listeners to tune in to his Tuesday show, after which he repeated, “I’m going to leave you with this:  These are not good people.”

Those wishing to subscribe to the show may do so here.

While he said he would not divulge the names of specific operatives, he said that illegal activity was well within the scope of their agenda.

Before Obama was elected in 2008, many Americans questioned his eligibility, allegiance to the United States based on his reported dual or triple citizenship, and agenda for the country based on his favoring of “spreading the wealth around.”

Article II, Section 1, clause 5 of the U.S. Constitution requires the president to be a “natural born Citizen.” With credible news articles having reported Obama as “born in Indonesia” or “born in Kenya” prior to his first presidential election in 2008, many Americans expressed doubt as to whether or not he was eligible to the office.

Rather than investigating, the mainstream press excoriated, ridiculed, and insulted anyone asking such questions even if they themselves had once reported Obama as foreign-born, as in the case of MSNBC “Hardball” anchor Chris Matthews.

In March 2012, following six months of investigation, a team of investigators announced at a press conference that the image released by the Obama White House said to be a scan of a certified copy of Obama’s long-form birth certificate is a “computer-generated forgery.”

His Selective Service registration form was also found to be fraudulent. After investigators requested to inspect a certified copy on file with the Selective Service System, then-Director Lawrence Romo refused them access and suggested that due to new archiving protocols, it had been destroyed.

The mainstream press refused to investigate the findings, as did Congress. Despite warnings from Maricopa County Sheriff Joseph Arpaio, who commissioned the investigation, that Obama’s lack of verifiable documentation posed a “national security” threat, Obama was reelected in November of that year.

Further, lead investigator Mike Zullo has reported in radio interviews that airline manifests from the days preceding and following Obama’s claimed birth on August 4, 1961 are missing from microfilm provided to him through a FOIA request by the National Archives Records and Administration (NARA).

In interviews with The Post & Email, Zullo has stated that Obama’s residency in the White House was based on the “foundational lie” of his fraudulent birth certificate.

The totality of evidence Zullo and Arpaio acquired during the more than five-year-long investigation was reportedly turned over to federal-level authorities at the end of December, when Arpaio left office.

Although investigators stated early on that the identity or identities of those who created the forged birth certificate were known, that information has not yet been released.

Before Trump’s Saturday morning Twitter claims, many alternative-media outlets had already observed that national-security leaks emanating from the intelligence community could not have occurred by accident, but rather, with the intent to hobble the nascent Trump administration. Speculation of the existence of a “shadow government” seeking to destroy Trump’s presidency has now reached some in the mainstream media, fueled in part by an article in the UK Daily Mail published last week stating that Obama confidante and former senior advisor Valerie Jarrett has moved in to the Obama’s post-presidential Washington, DC mansion with the purpose of undermining and derailing the Trump administration.