“HOW DO I GET THE LOCAL NEWS MEDIA INVOLVED?”

(Feb. 19, 2017) — An inmate whose story prompted The Post & Email to contact the Tennessee prison commissioner and an officer at CoreCivic, the owner/operator of the prison in question, has asked to be identified.

In our initial article containing the inmate’s first communication with us dated January 16, 2017, we withheld his identity for several reasons, first and foremost of which was that we did not have his written permission to reveal it.

A second subject article containing our letter addressed to Tennessee Department of Correction (TDOC) Commissioner Tony Parker, spokeswoman Neysa Taylor and CoreCivic Executive Vice President Harley Lappin was published on February 1.  To date, we have received no response from any of the three parties.

The letter was sent as a copy to a fourth party which The Post & Email will soon reveal.

Like many other inmates at the Trousdale Turner Correctional Complex (TTCC) in Hartsville, TN, the inmate described delayed medical care last September.  However, at the time, he was experiencing a heart attack, which he explained in a subsequent letter dated February 1 was not his first.

When the inmate first wrote to us, he reported that when he told a correction officer by the last name of “Davis” that he was having chest pain, Davis notified a prison nurse, who allegedly responded with, “I don’t interact with inmates like that” and “I hope he dies it is one less we have to worry about” [sic].

“These comments were witnessed by several inmates and C/Os, one C/O in particular C/O Rebecca Gibbs,” the inmate alleged.

Finally once gotten to medical Nurse Pam Wilson evaluated me and said “He’s faking I have to go eat” and proceeded to go eat chicken. Once again C/O Rebecca Gibbs witnessed all this. Finally I was sent to the hospital where my left ventricle was blocked and a stent was placed. This is this situation in a nut shell so to speak. [sic]

It is unclear how long the inmate was hospitalized, but he wrote that at some point, he was the victim of a violation of the Prison Rape Elimination Act (PREA).  He said that he “tried to speak with over 6 C/Os” about it but that the officers’ response was “I can’t help you” or “I was laughed at.”

Despite TDOC claims to the contrary, TTCC has been reported by a significant number of inmates and their relatives to be severely short-staffed, insensitive to medical needs, failing to provide employment to inmates as required by Tennessee state law for those who are physically capable of it, and maintaining an almost-continual state of lockdown, reportedly due to rampant gang activity.

Beatings at the hands of gang members have been reported as well as unexplained deaths.  Earlier this month, a federal lawsuit was filed against the TDOC and CoreCivic for allegedly failing to administer insulin and other medications to treat diabetic inmates on a regular and timely schedule.

“At this point I was left in the showers in AB all night and while laying in the shower over night it came clear to me that TTCC had no remorse for human life so I decided I was gonna commit suicide,” the inmate further wrote.

After attempting suicide with a belt, he reported that “C/O Rebecca Gibbs informed me that once again she saved my life and proceeded to tell me how I was found.”

The inmate said he was placed on “suicide watch,” then a “mental health watch” after being evaluated by a “physic doctor.” 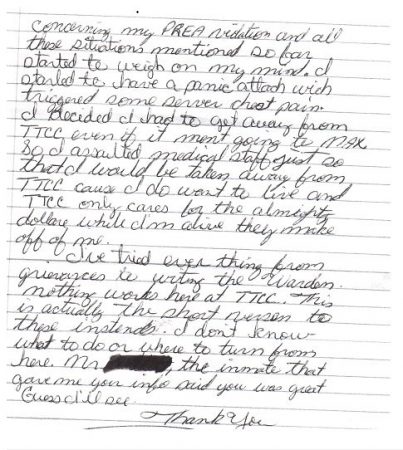 As a postscript to the letter, he added:

The shower incident occurred prior to his assault on a correction officer carried out with the intent of being relocated from TTCC.

His February 1 letter relates that he is now in “seg,” or “segretation,” awaiting transfer to a different facility as expected. “My condition is still terrible but no major issues like I wrote about before,” he said. “Issues like I can’t get medical to see me. I guess it is due to the fact I did assault one of their staff. I still for over a week now out of my heart meds,” he wrote.

“I don’t think I explained my medical situation well in the last letter, but the heart attack I did mention was my fourth major heart attack. I’ve been a heart patient since 2011, my first major heart attack, March 4, 2011 I was sent to an outside cardiologist on Nov 7, 2016 from TTCC for a follow-up. It was then explained that only 30% of my heart was working. I was suppose to be rescheduled within 30 days to have an echo for my back valve, but have, to date, yet have this appointment. So my meds are crucial to my health,” [sic] he said.

On page 3, he reiterated another common complaint from TTCC inmates that the food is routinely served “cold.”

[Editor’s Note:  The following excerpts from the letter are presented with typographical errors intact.]

The Post & Email is aware of at least one Tennessee television station which is familiar with our work in exposing corruption, cruelty and substandard conditions in the state’s prisons as well as the grand jury indictments issued under a judicially-selected and unvetted grand jury foreman.

“Yes I comitted the crime of robbery and I deserve to be punished, but not to the extent it has become,” he said.

On page 4, he wrote that “this place already has proved my life worthless to me. So even though I don’t live rightious I have had to put my faith and trust in God. I’ve told my family that if I do die in here that they may need to persue it. Outside this I’m not afraid. I want it to be known that I’m doing what I can to stand my ground. Cause I feel that may just may my actions might change something and it may save at least one other person the shame and torment down the road. And that to me is my ultimate bonus to repay my debt to society so to speak…”

“So please don’t be uneasy with putting my name Ricky Lynn Greene 276588, out there,” he continued on pages 5-6. “There is nothing I want more than that. I’d love to be interviewed on my story like I said I have names of C/O’s that have told me they back my stories that know I’m telling the truth no matter how much this place sweeps things under the rug.”

In our letter to Parker, Taylor and Lappin, we redacted all personal information but now present it here.  According to his TOMIS registration, he is 42 years old. 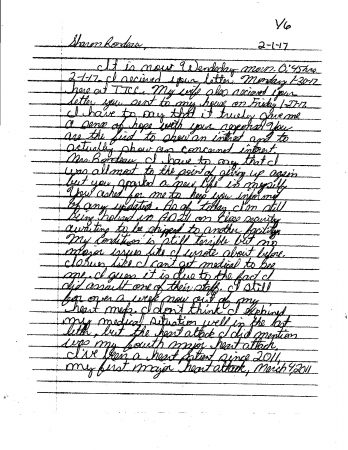 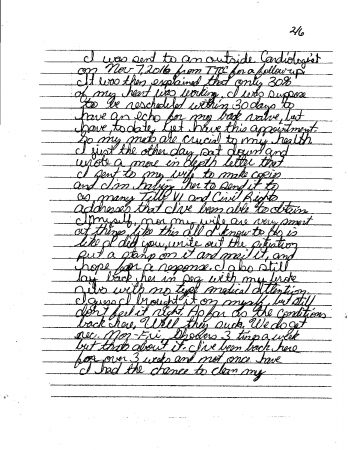 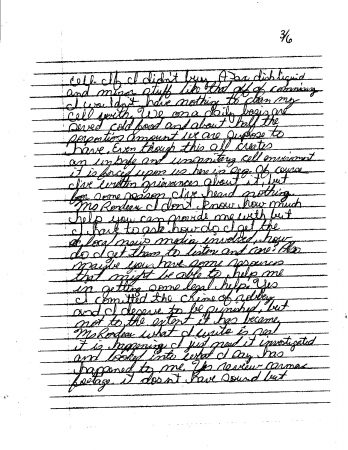 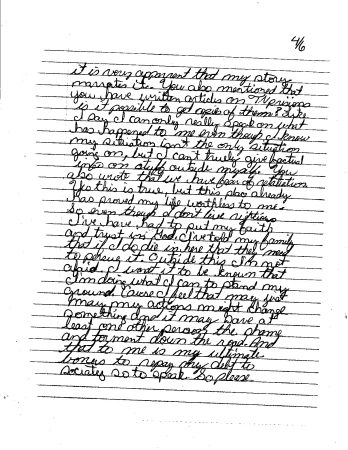 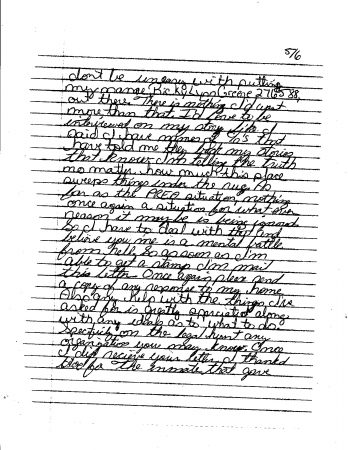