Report: Inmates Overdosing on Drugs, “One Died” in January

“THIS IS THE SECOND TIME THIS MONTH” 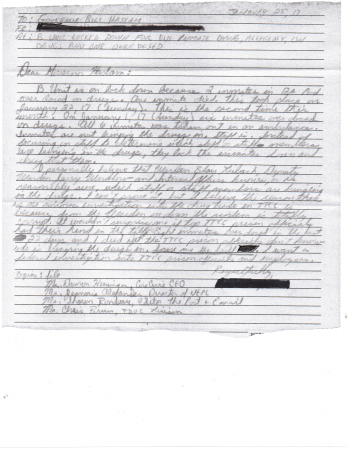 (Feb. 3, 2017) — On January 25, an inmate at the Trousdale Turner Correctional Complex (TTCC) wrote a memo to Tennessee Gov. Bill Haslam, copied to this writer and other parties, reporting that a unit of the troubled prison was placed on lock down as a result of two inmates who allegedly “overdosed on drugs.”

“One inmate died,” the author of the memo wrote.

He reported that the incident occurred on Sunday, January 22, 2017. “This is the second time this month,” he wrote.

TTCC is owned and operated by CoreCivic, whose CEO, Damon Hininger, was also copied on the memo.

The inmate opined that TTCC employees are supplying the drugs to the inmates.  “I can’t prove it, but I believe the reason there is no serious investigation into the drug trade in TTCC is because from the Warden on down the system is totally corrupt,” he said.

“I want a federal investigation into TTCC prison officials and employees,” he concluded the memo.

On January 22, 2017, CoreCivic’s Executive Vice President, Harley Lappin, had an editorial published at the Knoxville News Sentinel in which he stated that after its launch in the 1980s, the company’s expertise was sought because “eight entire corrections systems, including Tennessee’s, had been declared unconstitutional or were operating under court order. This means that those facilities were dangerously overcrowded or failed to meet minimum standards for safe and humane conditions.”

Based on the number of letters this publication receives weekly describing horrific conditions, rampant drug use, uncontrolled gang violence resulting in stabbings and thefts, the absence of physician-prescribed medications, and constant lockdowns, CoreCivic is not maintaining a safe environment for inmates or corrections staff.

Although privately-run, TTCC reportedly is overseen by the Tennessee Department of Correction (TDOC), which will not admit there is a problem.

On January 24, The Post & Email wrote to Lappin, enclosing a copy of a letter from an inmate who reported substandard medical attention during a heart attack, a suicide attempt, and a purposeful assault on a guard so he would be moved out of TTCC to a maximum-security facility.

TTCC is designated medium-security but houses a large number of minimum-security prisoners accustomed to holding prison employment and earning “good time” which accrues toward reducing the time they serve.

Our letter was copied to TDOC Commissioner Tony Parker and TDOC Communications Director Neysa Taylor.  As of this writing, we have received no response from any of the parties.

Report: Inmates Overdosing on Drugs, “One Died” in January added on Friday, February 3, 2017

One Response to "Report: Inmates Overdosing on Drugs, “One Died” in January"