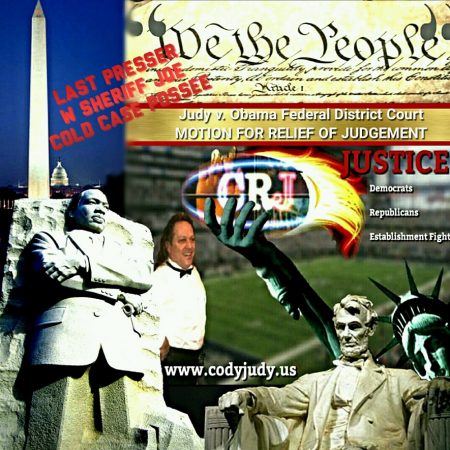 (Jan. 26, 2017) — Obama’s packed and moved out of the White House, but that doesn’t mean the grievance of the last eight years is removed from anything. As long as Obama is seen officially as a U.S. President the pain he’s caused with the usurpation of the U.S. Constitution is still being felt and will yet be felt for many many years. This was the message of 2008, 2012 and 2016 Presidential Candidate Cody Robert Judy as he fired off a Last Presser Motion for Relief of Judgement to the Federal District Court Judges in the Utah Division with the request the Case be re-opened due to new evidence that could not have been reasonably given to the Court at the time of filing.

That new evidence is of course Sheriff Joe Arpaio’s Last Presser that unfolded the cover up fraud of Obama’s long form birth certificate in a presentation entitled ” 9 Points of Forgery“.  With any criminal investigation of a crime comes the burdensome and tedious time investigators must develop for evidence that would expose the Truth and the crimes committed.

Next the Cold Case Posse make the Case Obama’s Birth Certificate is a Fraud.

“There have been so many hurdles to get over,” said 3x Presidential Candidate Cody Robert Judy. “It’s been just like walking through a nightmare obstacle course.”
There were standing questions to be answered, interpretation questions to be answered, and of course investigation authenticity or forensics questions that just simply took a lot of time. The establishment status quo has been working night and day to cover this up and bury it as fast as we could become enlightened to the intricacies of the violations so there just wasn’t anything simple about it the web of complex obstacles. Of course the former Constitutional Professor Obama reported to be knew with his Harvard Education just how to tangle every one up from standing hiccups to racial finger pointing, and it’s worked for him so far.
Probably one of the most interesting things about this is indeed the long form birth certificate and the forensics of the investigation. People seem to gravitate to forensics as much more black and white then say they do a logical founding principle set in our U.S. Constitution as a protective layer of our national security and sovereignty.
Read the rest here.