SHOULD HE BE REWARDED? 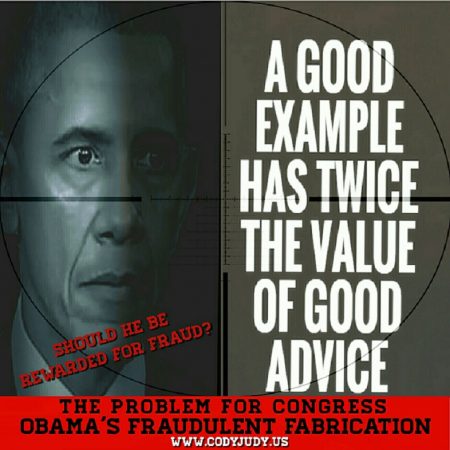 (Dec. 19, 2016) — The following 9-min., 45-sec VIDEO was posted 24 hours and has generated over 5K VIEWS  combining Obama’s last press conference highlights with the Cold Case Posse findings released by Sheriff Joe just the previous day. Not one reporter in Obama’s final press conference asked Obama about the fraud and fabrication of his long-form birth certificate now assessed forensically to be evidence of multiple criminal acts.

I was logged on during the original presentation of Sheriff Joe’s Cold Case Posse finale and the overwhelming public outrage that Obama would feed the public a fabricated, fraudulent, forged birth certificate was squalid. The public outrage and ire raised by a Usurper of the Office of the President has already made its way to the front desk of multiple elected officials including U.S. Representatives and U.S. Senators.

The lines of morality are definitely being drawn and quartered on this one. Any elected official is being asked outright, “Are you not condoning CRIME in the Office of the President absent HEARINGS on Obama’s birth certificate? Do you condone corruption in our government?” as a tell of corruption for all public officials regardless of political party!

The wiggle room here for politicians has considerably shrunk with the incredible revelations contained in the video. It’s a fair question to not only Congress but the courts and Justices of the U.S. Supreme Court who have failed twice to shed the light on the criminal acts associated with Obama’s fraudulent forged fabrication of a long-form birth certificate.

People have a right to be upset when the information that’s been fed to them suddenly comes to the climax and is found to be a nefarious screeching lie. People are flabbergasted at Obama’s audacity now more than ever! It far supersedes the public anger when Gruber announced Obamacare was passed based on the back of non-transparency and public stupidity.

One Response to "The Problem? For Courts & Congress – Obama’s Fraudulent Fabrication"